Last July, eighteen people from the German deep ecology network met in my community, Sieben Linden (www.siebenlinden.de), in the North of Germany.

While we had initially planned to hold a two-day German-speaking meeting followed by one in English over four days, we unfortunately had to cancel the English event due to the low number of registrations. The reason for this was not lack of interest, as one might imagine, but lack of money.  Many concerned people in Eastern European countries are unable to afford the ticket to Germany.

Knowing that people in many countries are deeply interested in further experiencing deep ecology work and learning the skills to give introductory workshops, we invited all interested people we knew from countries such as Hungary, Latvia, Greece, Poland, Portugal, Spain, France, Belgium, and England.

Our dream is to set up a “Train the Trainers“ course for all these people from different European countries. However, this requires funding in order to allow for the participation of everybody interested, especially for young activists with little money. So one of the results of the German-speaking meeting was a commitment to research funding opportunities and then to plan and schedule another European network meeting.

As far as the German meeting is concerned, both days were facilitated by an open space process where everybody was invited to bring in his or her topics of interest. Many groups met in parallel to discuss their interests and exchange views before presenting the essence of their conversations to the plenary. This way we could engage many topics in a relatively short time.

Some topics we discussed and shared include: Nuclear Guardianship, European Network, Train the Trainers, Money seen from a deep ecology perspective, Dance the Spiral.

Weaving Our Network of Active Hope

A central question at our meeting was how we could continue to weave our network of Deep Ecology or Active Hope.  One thing became clear: for our internal and external consolidation we need a hierarchy-free network where we can learn from and support each other. In Germany there are already established regional networks and groups of people who have undergone the Holon Training, a year-long training in deep ecology taught by Gunter Hamburger and myself. (See “The German Holon Training” in the Spring issue of Deep Times, page 35.) These groups hold regular meetings that, in our view, could be further strengthened and deepened. Since Joanna Macy will not be coming to Europe any more, our Deep Ecology network is particularly important for the continuation and development of the Work That Reconnects.

In addition to these established groups, there are connections to the Transition Town network as well as to the de-growth and permaculture movements. Here good communication and transparency are key for establishing a strong network. Our intention is to increase the feeling of “one community connected in one spirit.”

We have agreed to schedule two network meetings at fixed times every year: always on the second weekend of March and November. As an exception, the coming meeting will take place on the second weekend of April 2017 (Thursday to Sunday). Whoever attends will make up the group that will shape our further work. The outcomes of the meeting will be recorded in writing and circulated via our email list so that everybody is informed, regardless of whether or not they were able to attend.

On these websites you can also find various offerings on such topics as “Acting out of your heart” (workshop), “Train the Trainers” Program, Coaching, Supervision, Open Space Process – in addition to the Holon Training.  The current year-long Holon Training in Deep Ecology will end in March and the new one will start in October 2017 (in German).  We invite you to join us! 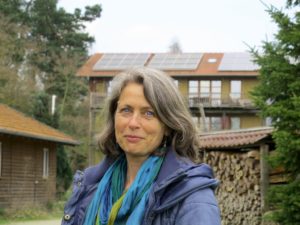 Gabi Bott
I live in the ecovillage “Sieben Linden” in the North of Germany (www.siebenlinden.de), a community of around 140 people that is a deep ecology project for me.  I discovered Deep Ecology in 1997. In the year 1998/99, I took a training in WTR in Germany. In 2000, I worked with Joanna Macy in America. Now I offer workshops in WTR and holon-trainings and also workshops in community building. In addition, I work as a yoga teacher and practice Buddhist meditation. www.tiefenoekologie.de

One thought on “Active Hope in Europe”