No railroad tracks in sight.        No streets with their cars.

traffic sounds and audiences         and his face falling toward all of ours,      upturned.

that anyone would answer such an ancient door         new to me, but ancient

Please note:
Click on the “Print Friendly” button at the top of the page to view a pdf of this poem in its original format. 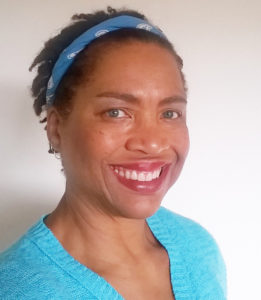 A. M. Davis was born and raised in Oakland, California. She is storyteller/poet, a speaker on behalf of the Earth. In 2007, she walked away from her job to devote her life to her creativity. Upon attending a silent meditation retreat, she found space of time in her racing mind, and discovered that she was not her thoughts. This led to daily meditation, retreats, and becoming part of the East Bay Meditation Center community. She recently discovered the Joanna Macy’s work, and the trajectory of her life finally made sense.

You can find more of her work at annmariedavis.com.