(Deep Ecology teaches us that we are connected to all life on Earth. As we deepen in our awareness and appreciation of our brother/sister species, we expand our sense of belonging and our deep love for the world. And, if we’re lucky, we may be gifted with a message of inspiration when we need it most, helping us to see with new eyes.)

The chatter in my head wouldn’t stop. Someone close to me is furious with me for speaking my truth and for taking actions and living my life based on my beliefs. Despite my requests to talk things through, she refuses to speak with me, now or ever. Her vitriol is impacting others in our community and has left me hurt, angry and feeling powerless to change the situation.

No matter what “happy thought” I conjured up to focus on, my obsessive internal processing somehow always brought me back to this person and her unjust condemnation.

“Let’s go on a hike,” Miles said. Good idea. Maybe that would help clear my head, give me some perspective. The crows perched on the fence bobbed their heads and cawed with seeming approval as we walked through the gate and into the open space where the trail began.

Miles took notice. “Those are crows, aren’t they?” I nodded. “How do you know they aren’t ravens?” Miles asked as we started our hike in the Boulder foothills. “How can you tell the difference?”

“Ravens are larger than crows,” I explained, “and their beaks are thicker. A raven’s tail is wedge shaped and a crow’s is more straight across. But those characteristics aren’t that helpful when looking at an individual bird. A definitive identifier is its call.”

As if on cue, we heard a gravelly, curt croaking coming from the trees. Then the flutter-whoosh of black wings flying past us overhead. “There! That’s a raven,” I said. I couldn’t have scripted that any better. It flew past so quickly, we couldn’t see the shape of its tail. But the guttural greeting was classic raven.

Soon we heard another raven voice join forces with the bird that had just passed us by. Something had captured their attention. That something had to be of some consequence because layered over the raven rabble came the crisp caw, caw, caw of crows. The perfect bird-call teaching moment. 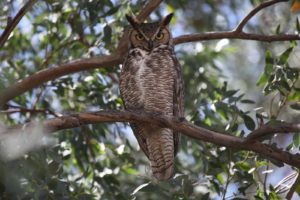 We scrambled up the rocky, narrow path through the spruce and pine forest to see what all the commotion was about. Around a bend, we stopped at a grassy clearing with three large spruce trees growing several hundred feet from the trail. There in the branches, an avian rumble was about to commence. The focus of the agitation perched on one of the lower branches, her large brown-feathered body held tall and still, her tufted ears leaving no doubt as to her identity. Great Horned Owl. Several feet above her sat two disgruntled ravens and higher up in the safety of the cheap seats, a murder of crows perched, like a crowd at a prize fight, eager to see who was going to win this badass bird showdown. I felt like we had walked into a wildlife show on Animal Planet. There just had to be a camouflaged film crew hiding in the underbrush nearby.

Like the voyeuristic crows, I, too, was wondering who would prove the victor here, owl or raven. Both are about the same body length, both amply able to protect themselves. There is no love lost between owls and ravens. Great horned owls eat crow and raven eggs and on occasion will kill young birds of both species. But as adults, raven and owl are equal adversaries. In this particular contest, however, the odds weren’t exactly even. We had two assertive ravens (with a raucous crow contingent) against one formidable owl.

We watched as the first raven hopped from branch to branch, making its way ever closer to the owl. Its cohort croaked a rally cry that the crows echoed. The owl didn’t move a feather, her eyes fixed on the approaching agitator. Raven landed on a branch a mere foot or so away.

My heart went out to the great horned. I felt sure that she would lose this skirmish and be forced to abandon her perch, driven out by her harassers. The odds seemed stacked against her.

Suddenly the owl thrust her head toward the raven, neck extended, and opened her sharp, curved beak wide. To my surprise, she didn’t make a sound, at least anything I could hear. A silent declaration, “Stay away!” The raven jumped backwards. Owl retracted her neck and returned to her statue-like stance. Uttering an indignant squawk, the raven spread its wings and flew past us.

Was it going to gather reinforcements?

Apparently not waiting to find out, the second raven hopped into action, moving down the tree one branch at a time, approaching owl from the opposite side. The only adjustment owl made was a slight turn of her head, keeping raven squarely in sight. That is, until raven got too close. Like a striking snake, owl again shot out her neck, and her beak snapped open with inaudible threats. This raven replied with a jab of its beak before taking flight, departing in the same direction as its partner.

Despite two hostile provocations, the great horned held her ground. I hadn’t seen one flex of her powerful talons, a flutter of wings, a flick of her tail. I was riveted by her composure. Let’s see how she handles the crows.

With the ravens in retreat, I expected the crows to do what crows so often do—surround an owl and caw incessantly, sometimes for hours, until they force the bird to take flight. Once in the air, they will chase owls, dive bombing and pecking at them. These crows appeared to be gearing up for the attack, moving closer together in the trees, chattering loudly. But rather than mobbing their adversary, these birds deviated from their instinctive game plan, took to the air and abandoned the clearing, leaving great horned owl alone and in peace.

What Miles and I had the privilege to witness wasn’t supposed to happen, at least according to bird behaviors and relationships I was familiar with. This great horned owl faced a feisty flock of adversity and came out the victor, with barely a ruffle of her soft brown feathers and some inaudible avian smack talk. She stood her ground, made her position clear that she wasn’t going to leave and drove her attackers away with the power of her presence.

“I want to be like that owl,” I said to Miles. “The way she held her own, how she handled all that aggression.” I thought about the personal animosity I was struggling with and all of the stress and perseveration it created in me. “Maybe this owl showed up to teach me how to deal with all of this. She didn’t go on the attack, she wasn’t intimidated. She didn’t overreact or run away. Maybe I just need to remain calm, stand tall, be myself, and speak softly with very clear intention.”

The great horned opened her magnificent three-foot-long wings, released her taloned grip from the tree branch and gracefully lifted herself into the air, flying silently to another perch a bit further up the hillside. We watched as she commanded a new spot in a pine tree, settled in and closed her eyes, as if to say, “My work here is done”.

In that moment, I knew that it was now up to me to learn from this gift I’d just been given—how best to be like owl, how to find that peace and strength within myself, without ruffling a feather, no matter who’s perched in the branches above me.

Kathleen Rude fell in love with the natural world as a young child and found her voice for environmental activism at age 10. She has a B.S. in Wildlife Ecology and an M.S. in Natural Resources. Kathleen began her career as an environmental writer. Her studies of indigenous spiritual practice eventually led her to become a shamanic practitioner and ceremonial leader. She has been mentored by Joanna Macy and is a senior facilitator of the Work That Reconnects. Kathleen is affiliated with the Joanna Macy Center at Naropa in Boulder, CO. In addition to her Active Hope workshops, she also runs workshops on environmental awareness and Earth-based spirituality. Kathleen has published her first novel, The Redemption of Red Fire Women. She is a board member of Nuclear Energy Information Service, a nuclear power watchdog organization, opposing nuclear power and promoting sustainable renewable energy.

2 thoughts on “Owl’s Gift: The Power of Presence”