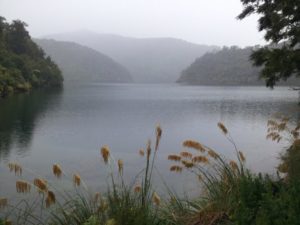 For centuries the prevailing western approach to the Earth and nature has been that humans are separate from nature.  Not just separate, but superior to nature.  This thinking has led us to view Earth as a resource to be owned, exploited, and ultimately, depleted and desecrated.

In the process western cultures have colonised, marginalised, and in many cases wiped out, indigenous people throughout the world.  In doing so, the wisdom of indigenous cultures has been rejected, disparaged, and unheard for these many long centuries.

Now, however, there are signs that we in the western-styled cultures are beginning to see the error of our ways:

Two examples of these re-awakenings can be found in Aotearoa (New Zealand).

Since the 1980s the governments of New Zealand (acting as the Crown) have been engaged in processes of restoration, recognition and reparation with the indigenous people (Māori) of the country.

In 1840 the British crown signed a treaty (The Treaty of Waitangi) with many of the tribal groups in the country.  Article 2 (of 3) of the Treaty guaranteed that Māori retain full chieftainship over their lands, villages, and treasures.  In Māori the word taonga (translated as treasure) has a much fuller meaning than does the word treasure in English.  Taonga can refer to language, cultural heritage and the treasures that the earth provides.

However, it was not long before the Treaty of Waitangi was being dishonoured, ignored and rejected by the largely European settlers and the British colonial government.  Māori were dispossessed of their lands, fisheries and forests, beginning a process of degradation of lands, forests, lakes and rivers throughout New Zealand.

Māori, of course, did not accede to this without opposition.  The New Zealand Land Wars of the 1860-80s are known for their ferocity.  Following decades of petitions, deputations,  demonstrations, a famous land march, and legal battles, Māori finally forced the government to act.  In 1975 the Treaty of Waitangi Act was passed in the New Zealand parliament, establishing the Waitangi Tribunal.  The Tribunal had the power to hear claims by any Māori group over present or future actions that were contrary to the principles of the Treaty of Waitangi.  One of these claims led to legislation in 1987 recognising Te Reo Māori (Māori language) as an official language of the country –  the language that had been spoken throughout the lands, forests and on the lakes and rivers of the country for at least 800 years before the English speakers arrived.

In 1985 a crucial expansion of the powers of the Waitangi Tribunal was legislated for.  This expansion allowed for the tribunal to hear and investigate claims against the Crown retrospectively.

To Māori there is no disconnection from nature.  The ancestors of Māori are there within the natural world – perhaps as a mountain, perhaps a river.

Two claims by Māori to the Waitangi Tribunal brought with them the Māori understanding of the relationship between humans and the earth.  To Māori there is no disconnection from nature.  The ancestors of Māori are there within the natural world – perhaps as a mountain, perhaps a river.  The way that Māori see the world is distinctly different from that of the prevailing European way of seeing.  The following two examples exemplify this way of seeing: new seeing for Europeans, and an old, ageless seeing for Māori.

In 2014 the New Zealand Government passed the Te Uruwera Act which declared Te Uruwera to be a legal identity with the rights, powers, duties and liabilities of a person.  Te Uruwera is a large tract of native forests, lakes, waterways, mountains, flora and flora in the North Island of New Zealand.  The area had been designated as a National Park in 1954.

The Māori tribal grouping with centuries of connection with this area – the Tūhoe – recognise the area as their birthplace and homeland, and the place that they hold respect and guardianship for.

The legislation recognising Te Uruwera as being of equal identity to a person notes that the area is “abundant with mystery, adventure and remote beauty,” and that it is “a place of spiritual value, with its own mana and mauri.”2  Because of its legislated identity, the Act suggests that Te Uruwera will “inspire people to commit to its care.”

Lying some 170 km southwest from Te Uruwera the Whanganui flows north to south, from the mountains to the sea, through spectacular forests and countryside.  The river is considered an ancestor by the tribes along its length.

However, European colonisation disregarded this ancestral connection and exploited the river in many ways.  Claiming their rightful place as guardians of the river and its life force the Whanganui tribes have petitioned parliament, taken cases to court, and appeared before Royal Commissions for well over seventy years.  Finally, in 2014, a deed of settlement was reached between the tribes and the government.  The legislation for this deed recognised the Whanganui as

“an indivisible and living whole, from the mountains to the sea, incorporating its tributaries and all its physical and metaphysical elements.”

This settlement not only recognised the life force of the river but also the intrinsic connection between people and nature.

Earth and people are part of the same complex, interwoven, network.

These examples recognize the Earth as a living entity having equal value to that of humans.  Furthermore, these two pieces of legislation recognize that the distinction between humans and Earth (as western thinking has supposed) is erroneous.  Earth and people are part of the same complex, interwoven, network.

It could be claimed that these examples are confirmation of an environmentalist perspective giving rights to the Earth.  However, it should be noted that the legislation has been brought about as redress to the indigenous cultures, restoring their rights as people of the land.  In restoring those rights the legislation also takes note of indigenous cosmologies that understand the ongoing connection of humans with the Earth.  If we, from western-styled cultures, can learn from Māori and other indigenous cultures then we will approach the Earth in a much more sustainable, healthy, respectful, and honouring way.

We do not need to give rights to the Earth; we just need to find our rightful place within the Earth’s eco-system – a place that indigenous cultures have known since time began.  It is a place where we belong.

The final words belong to a saying from the people of the Whanganui:
“Ko au te  awa, ko te awa ko au.”
(I am the river, and the river is me.)

For the first time in Aotearoa (New Zealand)’s  history, lawmakers granted a river the legal rights of a human, thus awarding it status as a living entity. Capping 140+ years of legal struggles, parliamentary vote on March 15, 2017 ensured that the 90 mile Whanganui River will be represented by two guardians (one tribal and one governmental) in legal matters that concern the waterway. The legislation is a monumental victory for the local Maori people, for whom the river is an indivisible and living whole.

Articles describing this historic event can be found at: http://www.npr.org/sections/thetwo-way/2017/03/16/520414763/a-new-zealand-river-now-has-the-legal-rights-of-a-human.  This article includes a video of Maori singing a traditional  folk song in celebration of the  legislation.

Bruce Meder first came across the work of Joanna Macy in New Zealand during the 1980s where he and a number of other peace activists read and undertook the exercises in Joanna’s book Despair and Personal Power in the Nuclear Age.  More recently he has reconnected with the Work by attending local Buddha Touched the Earth retreats and Active Hope workshops. Bruce has worked in community development, community education, and social justice.  Now in Coffs Harbour, Australia, he is actively involved with a climate action group, a men’s mentoring group, a restorative justice program, the local Insight Meditation sangha, and will soon be co-facilitating an Active Hope workshop. Bruce has recently published a book (Opportunities Emerging: Social Change in a Complex World), and writes a weekly blog (www.rainbowjuice.org).