“There is no use trying,” said Alice, “one can’t believe impossible things.” “I dare say you haven’t had much practice,” said the Queen. “When I was your age, I always did it for half an hour a day. Why, sometimes I’ve believed as many as six impossible things before breakfast.”  ~Lewis Carroll [1] 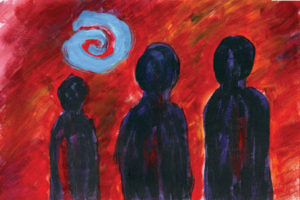 As Albert Einstein notes, “No problem can be solved from the same level of consciousness that created it.” When we’re operating in our everyday, conundrum-generating mode, any real solution, should we encounter one, will seem impossible.

All dreams, visions, and revelations come to our conscious minds from a greater domain.

And yet genuine solutions exist and are often offered to us by our own psyches—often by the soul or the Muse. These solutions arise from a level of consciousness decidedly different from our ego’s. Unless our own consciousness shifts, the soul’s and Muse’s suggestions will seem to us like impossible dreams and we’ll dismiss them out of hand. But these solutions are impossible only from the perspective of the ego that has not yet awakened to a larger story and a more mysterious and numinous world than it has yet imagined. All dreams, visions, and revelations come to our conscious minds from a greater domain.

Humanity—in fact, the entire Earth community—currently exists in such dire circumstances that the most significant, viable, and potent solutions will seem like impossible dreams to most everyone (at first). But this is apparently the way it has always been in our universe. At the greatest moments of transformations—what Thomas Berry calls “moments of grace”—the “impossible” happens. Like it did 2 billion years ago, when a certain bacterium (eukaryote) learned how to metabolize oxygen (that is, breathe) and how to reproduce by meiotic sex. Or perhaps like the big bang itself, some 14 billion years ago, creating something out of nothing. Or the appearance of an Earthling with conscious self-awareness. More generally, “wild love affairs,” poet Geneen Marie Haugen writes, “—Sun and Earth; fungi and algae; bacteria and mitochondria—preceded and spawned us. . . . This is the way it’s always been.” [2]

Yet at this critical hour, any dream worth its salt ought to seem impossible to mainstream society and to the mainstream elements of our own minds.

The idea of a soulcentric society living by an ecocentric sequence of developmental stages—to most people, this will seem an impossible dream. [3] In the face of the mindboggling casualties and depravities of contemporary Western societies, the Great Turning, too, might seem like an impossible dream, sometimes even to us impossible dreamers. Yet at this critical hour, any dream worth its salt ought to seem impossible to mainstream society and to the mainstream elements of our own minds. In George Bernard Shaw’s play Back to Methuselah, the serpent says to Eve, “You see things; and you say ‘Why?’ But I dream things that never were; and I say ‘Why not?’ ” [4] Great wisdom, this, from the iconic underworld emissary—counsel that we ourselves would do well to heed in this hour of radical crisis and opportunity.

If you consider the data on such things as current wars, environmental destruction, and political-economic corruption, there seems to be little hope for humanity and most other members of the biosphere. But if, alternatively, you look at the fact of miracles—moments of grace—throughout the known history of the universe, it will dawn on you that there is and always has been an intelligence or imagination at work much greater than our conscious human minds. Given that we cannot rule out a moment of grace acting through us in this century, we have no alternative but to proceed as if we ourselves in fact can make the difference—if, that is, enough of us uncover and enact our soulwork. It is vital that we each believe in and perform our impossible dreams, those with roots in the Mystery. In the end, I am quite certain, we will not be rescued by anything other than ourselves. If we are saved by a miracle, it will be the miracle of enough of us maturing into artists of cultural renaissance and imaginatively putting our shoulders to the wheel of the Great Turning.

Adapted from Bill Plotkin, Nature and the Human Soul: Cultivating Wholeness and Community in a Fragmented World (New World Library, 2008).

[1] Lewis Carroll, Through the Looking Glass (1872; reprint, London: Penguin, 1998), p. 174.
[2] Geneen Marie Haugen, “Questions for Creatures with Forward-Seeing Imagination (For Thomas Berry),” in Bill Plotkin, Nature and the Human Soul: Cultivating Wholeness and Community in a Fragmented World (New World Library, 2008), pp. 452-454.
[3] A few other impossible dreams, past and present: putting a human on the Moon; the end of the cold war; the end of apartheid in South Africa; and John Seed’s dream of stopping the destruction of the rainforests despite the data and socioeconomic trends showing it to be hopeless.
[4] George Bernard Shaw, Back to Methuselah, act 1, Selected Plays with Prefaces, vol. 2 (New York: Dodd, Mead, 1949), p. 7.

Editor’s Note:  This is the second in a three-part series “Creating A Mature Culture,” published by Animas Valley Institute and available here:
http://www.animas.org/books/bill-plotkins-soulcraft-musings/newsletter-archive/ 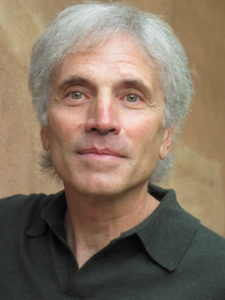 Bill Plotkin, Ph.D., is a depth psychologist, wilderness guide, and agent of cultural evolution. As founder of southwest Colorado’s Animas Valley Institute, he has, since 1980, guided thousands of women and men through nature-based initiatory passages. He’s also been a research psychologist (studying nonordinary states of consciousness), university professor, rock musician, and whitewater river guide. Bill is the author of Soulcraft: Crossing into the Mysteries of Nature and Psyche (an experiential guidebook), Nature and the Human Soul (a nature-based model of human development), and Wild Mind: A Field Guide to the Human Psyche (an ecocentric map of the psyche — for healing, growing whole, and cultural renaissance). http://www.animas.org

One thought on “Impossible Dreams”