John Seed is the father of the Australian Deep Ecology movement. Since 1979, he has been deeply involved in direct actions which have resulted in the protection of Australian rainforests, 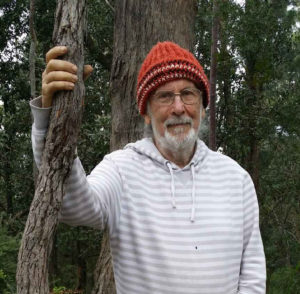 while at the same time traveling nationally and internationally to run Deep Ecology workshops, facilitate Councils of All Beings, inspire political activism with “Climate Change, Despair and Empowerment”  roadshows, and act as a consultant to a huge number of groups and campaigns. In 1995, John was awarded the Order of Australia Medal by the Australian government for his services to conservation and the environment.

John is also a writer, having co-authored “Thinking Like a Mountain – Towards a Council of All Beings” with Joanna Macy, Pat Fleming, and Arne Naess in 1988, plus numerous essays and articles. And as if that wasn’t enough for one man, John is a talented musician, sculptor, and filmmaker, often using his art in aid of Mother Earth.

John had a few quiet years after his second son, River, was born, but has returned to his active ways over the last year or so – which is timely, as we need his wisdom now more than ever. At our last “Buddha Touched the Earth” retreat, the idea arose that Deep Times readers might be interested in hearing from John. Has anything shifted in the nearly 40 years that he has been involved in the Deep Ecology movement? It turns out that, on one hand, “the more things change, the more they stay the same….”, but on the other hand, there may be more impetus now then there has ever been for a radical shift in consciousness.

Lisa: I thought our conversation could follow the Work That Reconnect’s spiral; so what, in this day and age, after all this time of doing this work, do you feel grateful for?

I feel grateful to have had 13.7 billion years of this amazing journey in the universe; I celebrate that all the time. And just what an extraordinary place it is, and how fortunate I am to have existed!

John: I feel grateful for having more of a personal life than I have had for some time, and having a wife and a three year old son and all of us loving each other – I feel grateful for that. And I feel grateful to have had 13.7 billion years of this amazing journey in the universe; I celebrate that all the time. And just what an extraordinary place it is, and how fortunate I am to have existed!

John: I suppose that because I am facilitating more and more experiential Deep Ecology workshops, it means that I sit regularly in circles where we all encourage each other to speak about our pain for the world, and none of the things that people are feeling distressed about surprise me. They all exist inside me as well as inside them.

It seems to me that one can’t authentically celebrate that unless one is willing to experience the anguish of seeing the Great Unravelling accelerating all around us.

It seems that there’s a definite possibility that we may be nearing the end of the line for humanity, or at least for human life as we’ve known it…and given that, I can’t think of anything more important to do then say goodbye in an appropriate manner.  That involves, for me, celebrating the beauty and just what an incredible gift it’s been to have travelled the road that we humans have travelled, and the 4 ½ billion year history of our evolution as organic beings and what we now understand about the evolution of the universe before that. It seems to me that one can’t authentically celebrate that unless one is willing to experience the anguish of seeing the Great Unravelling accelerating all around us.

It’s not that I have any special knowledge that life as we know it is coming to an end, but I think that anyone that doesn’t accept that possibility has got to be in denial. And so…given that this is a possibility that perhaps has never existed before…you know, I’m not sure that humans have ever faced the likelihood of our own impending extinction…I feel that looking at it square in the face–looking at it long and hard and not turning away–is what makes it then possible to say the most heartfelt and least hysterical goodbye.

Lisa: I’m curious – is this a new understanding that you’ve arrived at? Or did you have this same feeling when you started this work?

John: When I reread my article “Beyond Anthropocentrism” in Thinking Like a Mountain, published in 1988, it’s saying the very same 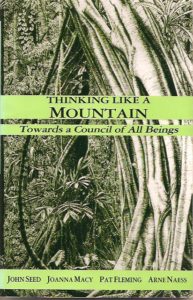 thing. My proposal then was that
nothing short of a revolution in human consciousness could save us at this point. It’s not that I think that that’s impossible, not at all – the sort of deep time road that we’ve travelled is littered with miracles on the scale that would be necessary for this revolution to occur. But the question is: is there anything that we could do that would make that leap in consciousness more likely?

So I look at how consciousness itself evolves. It used to be that there was no such thing as human consciousness, and now there is. And there was a certain evolutionary path that must have taken place. It seems to me that the most obvious hypothesis is that consciousness evolves according to the same rules as physical evolution – except that it goes a lot faster. Indeed, if we look at stories of spiritual enlightenment of certain individuals, it seems that the evolution of consciousness can be instantaneous – but that has  happened  very rarely. And what would actually be necessary would be something of that immensity, sweeping the globe.

What are the conditions that lead to the evolution of consciousness?

In the same way that the Buddha recommended meditating in graveyards as a way to remind ourselves of our own personal mortality, it seems to me that meditating on human extinction may be an important ingredient, the ultimate pressure on the development of consciousness.

It’s worth remembering that our ancestors survived the previous extinction spasms …… this is the fifth or the sixth, and we’ve made it through all of the others, so we have a tremendous pedigree of success behind us …..But anyway, that’s the idea that I’m working with, that perhaps if we  look long and hard at our own impending extinction, steep our minds in this likelihood, that this might create the conditions for the kind of change in consciousness that could usher in a different scenario.

Lisa:  A lot of the latest behavioral science supports that idea that people react better to positive than negative stories – so then the question is, how do we create a positive story for humanity, going forward? Some people say “the positive story for the planet would actually be if all humans disappeared”. But that’s not most people I know, most people kind of feel like the human race should continue.  And so, moving into “Seeing with New Eyes” – is seeing with new eyes what you’re talking about: looking at going deeply into the idea of our possible extinction, and seeing if that can actually take us in a positive direction?

Lisa: Yes, well that’s key. So starting with gratitude that we live in this amazing time, and then gently leading them to the idea that our extinction is possible, and then going forth and celebrating that we have the capability of trying to do something about it,  and that we can do this best by being together, in community….

John: Yeah, all those things. I’m facilitating workshops in Australia and New Zealand again partly because it seems to me that showing people that we can invite the deepest despair and rise immediately to celebration from that place, is a critical piece of the kit that we need–to show that it’s not necessary to be in denial about those feelings, that we can invite those feelings to do their damndest, that they can hit us as hard as they want to, because we can come out the other side flying and singing.

Lisa: And do you still, in the workshops that you do now, when you do the despair work, have you had to introduce new kinds of ways of celebrating? Have you have had to develop extra processes? 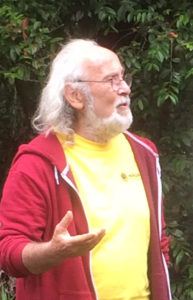 John: No… but the “Seeing with New Eyes” piece that I do after the Despair work are two processes (which people can find on my website: the Earth as Peppercorn, and the Cosmic Walk) that also move us from ecological ideas to ecological identity, from social identity to ecological identity. It’s that element of our ecological identity which is vast, which is the solar system, which is the universe itself– and we are that, of course. And these particular processes allow us to authentically experience ourselves in that way. To the extent that we can authentically experience ourselves as the universe itself – from that place, we’re not subject to the anguish of the human. We have a feeling of relief from the pressure of our situation. And then, I believe, we can much more wholeheartedly return to  our incarnation and discover that we have nothing better to do than continue to struggle for the wellbeing of the world, and for the change in consciousness,  and  to look after each other and all of those things….. but from a less hysterical place.

Lisa: Okay!  So my understanding, just to clarify: you’re saying that after you do the grief work, it’s good to go into some form of interconnection work, or deep time work,  where we remind ourselves that we’re part of something bigger than ourselves.

Lisa: Beautiful. Thanks so much for sharing your thoughts, John. 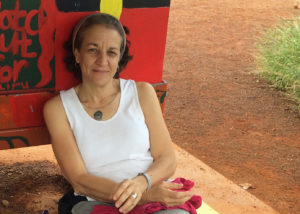 Lisa Siegel is a passionate environmental educator, community activist, and mother of two sons. She has been lucky to have experienced Deep Ecology/The Work That Reconnects first hand with John Seed and Joanna Macy, and has been a student of Insight Buddhism for the past five years. Lisa is a founding member of the Centre for Ecological Learning (CEL), located in the lush Bellingen Valley in NSW Australia. The WTR has been the foundation for her work with young people in a local environmental youth group, as well as adult workshops and retreats that she has facilitated over the years through CEL (www.cel.org.au).