by Paula Hendrick and Rosalie Anders

As the national/international Work That Reconnects Network continues to evolve, we offer this look back at the formation and evolution of the “original” Work That Reconnects Network, Interhelp. We have drawn heavily on two articles from Awakening: An Interhelp Quarterly: “Interhelp’s Metamorphosis” by Melissa Everett (Spring, 1988) and “Interhelp, Whence and Whither” by Ginny Senders (Fall, 1994).

We’d love to hear from any readers who were part of the development of the Despair and Empowerment Work, or participated in early workshops. Please contact Paula here.
—Paula Hendrick and Rosalie Anders

The nuclear arms race was terrifying in the late 1970s and early 1980s. We lived through one close call after another as we stood on the brink of devastation. Instead of waking from nightmares, many of us woke up into what felt like a nightmare: first strike strategies, civil defense plans for a “winnable” nuclear war, and new generations of missiles.

As anti-nuclear activism surged, a field of study emerged that studied the impact of the nuclear threat on our culture, our relationships, our lives. Research showed that the enormity of the threat robbed people of the dynamism, vision, and capacity for human relationship that might lead to real solutions. The pattern of isolation and inaction was termed (by Robert Jay Lifton) “psychic numbing.”

A search was on: what could unlock people’s capacities for facing difficult facts, heart to heart, thus restoring basic human connection and capacity for collective action?

On the west coast, Chellis Glendinning, Fran Peavey and Joanna Macy brought together the riches of cross-cultural experience, multidisciplinary scholarship and stubborn common sense. They observed that, when people share with others their feelings of fear, anguish or despair, their power to act for change is released. Thus began “despair and empowerment” work (phrase coined by Chellis). Joe Havens and Sarah Pirtle were experimenting with complementary processes in New England and came up with the concept of “the turning” toward empowerment (the phase in the Spiral now called Seeing with New Eyes).  Rapidly the efforts of these people and many others synergized to develop a model that used counseling methods, spiritual principles, ritual and myth, laughter and tears, reverence and irreverence to help individuals break out of the numbness of despair and denial.

Interhelp emerged as a networking vehicle for mutual support and shoptalk in applying these “despair and empowerment” concepts in workshops, in theater and music and visual arts, in mainstream peace and justice organizing, in families and communities. The first national Interhelp Gathering in 1982 in California was a mix of political strategy session, personal growth workshop and ritual — an expression of something sacred by people who felt real intimacy.* In 1983 Joanna Macy published Despair and Personal Power in the Nuclear Age, a workshop manual that allowed for wider and wider dissemination of the work.** 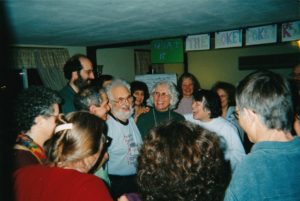 Interhelp’s aim was to embody in its own workings the values it was trying to awaken in the world: genuine honoring of the individual; encouragement of left and right brain functioning in some kind of harmony; flexibility and adaptability; respect for truth even at its most difficult. It aimed to be like a neural net, nonhierarchical and powerful by virtue of connections among people and groups. Fran Peavey in particular emphasized that deliberate organizational choices were needed to develop a network that shared leadership and honored many insights. The network spread widely in the US, in Europe and Australia.

For a period in the 1980s, Interhelp USA had paid staff and a national office. Over time, as a flush of grant money dried up, Interhelp decentralized and returned to its roots as a volunteer effort, coordinated by Regional Councils. Although the Despair and Empowerment work (now called the Work That Reconnects) has continued to evolve and thrive among interconnected networks all over the world, to our knowledge the current northeast US-based Interhelp Council is the only US group with unbroken continuity since Interhelp originated. We are proud of our heritage — and thrilled to be part of the larger Work That Reconnects Network.

*Others involved in the development of the Work and the design of national Interhelp Gatherings include Barbara Hazard and Kevin McVeigh in California and Tova Green and John Burt in New England.

**For more on the evolution of The Work That Reconnects, see Joanna Macy’s World as Lover, World as Self.

Rosalie Anders is a retired environmental planner, former social worker and longtime peace, justice, and climate activist. She first encountered Joanna Macy around 1981 at Rowe Conference Center, where she met activists who remained lifelong friends. She is a longtime member of the Interhelp Council and lives in Cambridge, MA.

Paula Hendrick was a co-instigator of Great Turning Northwest and now lives in rural MA. Her first Despair and Empowerment workshop was with Joe Havens and Sarah Pirtle in 1980. She co-leads retreats blending the spiral of the Work That Reconnects with Dances of Universal Peace and edits the Interhelp Newsletter.