The Work That Reconnects takes the central focus of attention off the human and puts it on the entire Earth community. For that reason it has seemed inclusive to me. So I breathed a sigh of relief, believing I was relieved from the task of having to worry about how to make sure people of color are included in workshops I facilitate. I did have trouble, however, with lumping all humans together as if we all have the same destructive impact on the Earth community.

So when it was suggested that facilitators take a course in white awareness, I was intrigued. I had already taken a couple of trainings in multi-cultural awareness and white privilege and oppression, and congratulated myself on how inclusive I am in my life – although admittedly, there are few opportunities to be inclusive or to be called out on my blind spots to these issues, since I maneuver in an almost entirely white world.

In her article, “For the Evolution of the Work That Reconnects,” Aravinda Ananda says that a clear request was made in the Earth Leadership Cohort she co-facilitates that “oppression be clearly named at the very start of a group’s time together and an anti-oppression lens become part of the framing of the Work.”

Not only is my world almost entirely white-identified, but it consists mostly of women who are straight, physically healthy, educated, and hold middle- and upper-middle-class values.

Not only is my world almost entirely white-identified, but it consists mostly of women who are straight, physically healthy, educated, and hold middle- and upper-middle-class values.

I have a smattering of people in my life who do not fit that mold, but I haven’t known how to engage them in conversations regarding challenges they face of being marginalized or discriminated against due to their “difference,” so haven’t delved into the issue very deeply.  I have often wished, like other white people I know, that we could draw more people of color into the “consciousness-raising” work we do, not knowing how to integrate myself into their communities.

Even if I am facilitating a workshop with only white-identified participants, I now realize I need to raise the issue of our privilege and how that affects the way we engage in exercises presented in the workshop. The course has given me many new awarenesses, four of which I will discuss in this article.

One awareness is the importance of naming the genocide, slavery and oppression that is the foundation of our white supremacist American society, clearly stating my commitment to paying attention to where I still either unconsciously promote racism or ignore that it exists as an integral part of American life. I can also ask participants to let me know if I demonstrate lack of awareness of these issues.

Now I don’t like to think of myself as racist or ignorant; it immediately puts me into a very uncomfortable space. Early on in the course the term white fragility was introduced in a article by Robin DiAngelo. This is “a state in which even a minimum amount of racial stress becomes intolerable, triggering a range of defensive moves.” One trigger she mentions is having my objectivity challenged by suggesting my “viewpoint comes from a racialized frame of reference.” As much as I do not like to admit that is true, it is.

Second, we watched a lecture called “Birth of a White Nation,” in which Jacqueline Battalora describes how the issue of race began in the U.S. and asserts that white supremacy is the structure upon which our country was founded and still operates today.

When we see this issue from the perspective of its structural roots rather than as an individual flaw, it changes the whole conversation around racism, oppression and genocide.

Included in the issue of race is Native American genocide and slavery of both Blacks and Native Americans. Part of the divide and conquer technique used by those in power since the founding of our country is to talk about race and oppression as if they are bad behaviors of individuals rather than a result of systemic racism – I’m not racist. I haven’t participated in trying to annihilate Native Americans or keep Blacks down. When we see this issue from the perspective of its structural roots rather than as an individual flaw, it changes the whole conversation around racism, oppression and genocide.

Third the word intersectionality was introduced by Kimberle Crenshaw, describing places where systems of discrimination or disadvantage overlap. Many members of targeted groups suffer from multiple levels of social injustice; however we don’t have frames in which to see the places where these injustices interact. Without a frame, there is no way to address the problem. At these intersections, Crenshaw says, people “fall through the cracks and are left to suffer in virtual isolation.” She points out that we know the names of black men who are killed by state-sanctioned violence, but we often don’t know the names of black women who are victims of this same violence.

Seems one contribution we can make as facilitators of the Work That Reconnects is to presence the intersectionality of violence against the Earth and violence against women, people of color, poor people, people with disabilities, or anyone else who is not a member of the ruling elite.

Fourth, we discussed the fact that the U.S. is a settler colony. I have always dismissed my discomfort about this as something that happened in the past and can’t be undone, so we simply have to move forward from where we are. But as Native Americans are gaining a stronger voice in their work to protect their sacred spaces, treaty rights, and our natural world, and to raise public awareness about their continuing efforts to survive, I am getting a more comprehensive understanding of the struggles they have dealt with since their first contact with Europeans over 500 years ago. Settlement of Native lands is not an issue we can gloss over: Oh well. That was then, this is now. No, we have to engage in the messy work of cleaning up the harm that has been caused by our ancestors, because we continue to directly benefit from it.

We have to engage in the messy work of cleaning up the harm that has been caused by our ancestors, because we continue to directly benefit from it.

We can no longer sit back and enjoy these benefits; we must engage in work that honors everyone. This is challenging work that includes making reparations to Native Americans, Blacks, and even Mexicans, from whom we also stole a huge portion of the southwestern U.S., which has its own history of colonization by Spaniards.

As I write this, I am looking forward to our next class, which is about “de-colonization.” OMG! The challenges of waking up are immense!

It occurs to me that when we speak of “Going Forth,” we can invite and encourage people to be aware of the fact that our country was built on white supremacy so, as we engage in various actions, we do so using a more inclusive lens. Becoming aware of the complexity and overlapping of issues – for example, we can’t work on animal rights without addressing our strong societal penchant for meat and dairy products, or considering the working conditions of those who work in slaughterhouses and why they may feel they have no other work options. Animal rights then becomes a multi-faceted issue that needs to be addressed in its entirety and within the context of the white supremacist culture we have in place.

I feel uncomfortable and even overwhelmed by the thought of considering every issue in such a broad context. This brings me back to grappling with my white fragility. No easy answers or ways of being here – and I want easy answers and simplistic solutions.

As I bear witness to the courage, stamina, resilience, and incredible soul work demonstrated by the Water Protectors at Standing Rock, I realize how soft I am. My softness comes from having lived an easy life that has provided little necessity for me to build muscles of speaking out, standing my ground, being outside in inclement weather, or confronting the military might that has been garnered by the white supremacist elite. By virtue of my whiteness, my middle-classness, I have not had to confront issues of debilitating poverty or other forms of discrimination, so it is easy for me to say, “I do not wish to engage in this issue” or “I will engage only in this way, or this much.” I have the privilege of choosing my battles and my level of engagement. I get to say, “Not right now, not this one, thanks very much.”

I am becoming very uncomfortable with continuing to live my life of white privilege. This course is helping me have the courage to consider what responsible actions I can take to become an effective ally for anyone, any being, or any ecosystem who could benefit from my stepping up and speaking out, and to call other white people to do the same.

The Work That Reconnects has created a great structure which supports this kind of ally-building. I am grateful for its continuing evolution. Thank you Eleanor for facilitating, Aravinda for your support, and all my classmates for your sharings and insights. I look forward to the continued deepening this course provides. 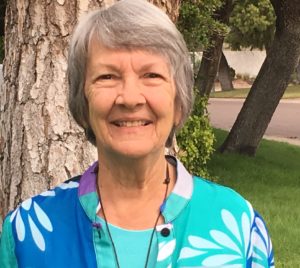 Maya Jones is a member of the Work That Reconnects Facilitator Network. She has been involved in spirituality, healing and subtle activism for over 30 years. She is committed to finding ways to help humanity make the shift to a life-sustaining culture. Her work is particularly informed by her study of Deep Ecology, yoga, and energy healing.

One thought on “Waking up White in the Work That Reconnects”