by Marguerite Kahrl, with Marjetica Potrč

When Marjetica Potrč and I were asked to collaborate on a project for Parco Arte Vivente (PAV) in Turin, Italy, we proposed to develop new resilient connections with the communities around the experimental art center. This process-oriented study of urban ecology employed permaculture and deep ecology to re-imagine a nearby existing community, one which has experienced upheaval, isolation and depression.

The participatory project began with an analysis of urban areas around PAV, during a workshop called ‘Wild Energies: wind, fire, and people on the move’ that Marjetica and I held in March 2015. The workshop included group practices, a review of permaculture design principles, mapping, on-site explorations, discussions with residents and examples of community spaces with the capacity to build resilient neighborhoods. The objective of the workshop was to identify nodal points in the neighborhood (social and environmental) for an onsite project that could serve as a refuge towards a more balanced and inclusive society. Ex Moi was selected as the context for our collaborative project despite concerns over the complexity involved. Ex Moi (ex Mercati Ortofrutticoli all’ Ingrosso) is a settlement in the former Olympic village in Turin that has been occupied for the last four years by over one thousand two hundred migrants, refugees and asylum seekers.

From this participatory process Con MOI was born. Instead of a built structure, the onsite project was constructed in the following months through an open process with meetings, workshops, food sharing activities and moments of conviviality. The multi-ethnic network was founded on the concepts of solidarity, systemic change, environmental ethics and the gift economy in order to promote trust, connection and intercultural communication. 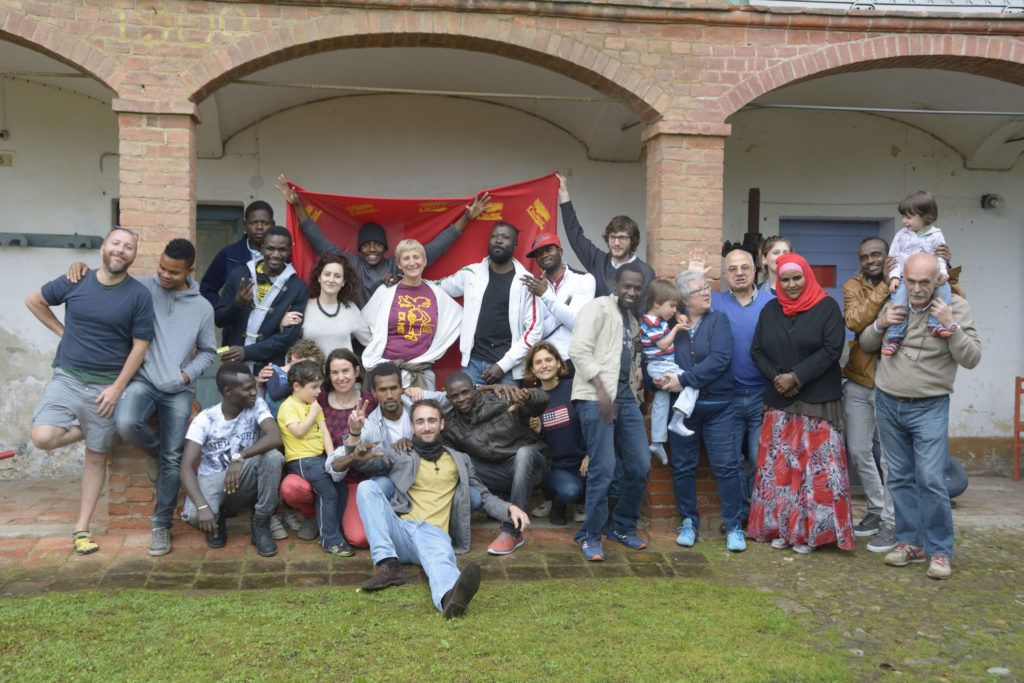 The group evolved slowly over the year with each person having an essential role. My part was to employ art as a catalyst for engagement and communication while Marjetica offered experience in the participatory design process.  Anna, a neighbor of MOI came with four years of active involvement in the solidarity committee of the occupation of Ex MOI; Marco with a combination of charisma and food sharing experience; Sarda, an artist and musician from Senegal, eventually designed our logo. Juma’s shop was the communication hub as we experimented with social networking tools. We began to spend time together at Moi and at PAV, proposing food sharing activities, identity and artistic workshops, and shared meals.  A  small but very motivated group of inhabitants from Moi formed around us, including Yussef, Amadou, Seedy, Juma, Laila, Mohamed, and Lamen, some teachers of the school Zakaria Compaorè (Pino) and other people outside MOI (Norma, Nadia).

During the initial stages of establishing our group, we used a number of facilitation techniques from the Work that Reconnects, such as active listening, pair shares, observation, open sentences and gratitude practices.  These exercises helped to create a common ground for our meetings, so participants entered into a shared space while forging intimacy between people with different backgrounds.

In particular, some of the activities we employed to bring people together and spark urban action included collecting unsold food from markets and retailers and redistributing it in the area without using money (food sharing). To help promote the project and unify our group, we designed a logo, produced T-shirts and badges, drafted a pamphlet for foodsharing with philosopher Gianluca (who specializes in the illusion of waste), built a food-sharing cart and worm bin, and created a documentary film. We have held and participated in other activities, such as dinners and social events, transforming various creative ideas into real-life practice.

Another example of our work is a project called Mini MOI, where members of the community in and around Ex Moi created self-portraits out of donated textiles.  After exploring ideas about group identity, the members of Con MOI embarked on the creation of individual self-portraits by transforming donated fabric into hand-sewn sculptures – Mini MOI. This activity was a relational and poetic response to transforming and redefining identity within the community. 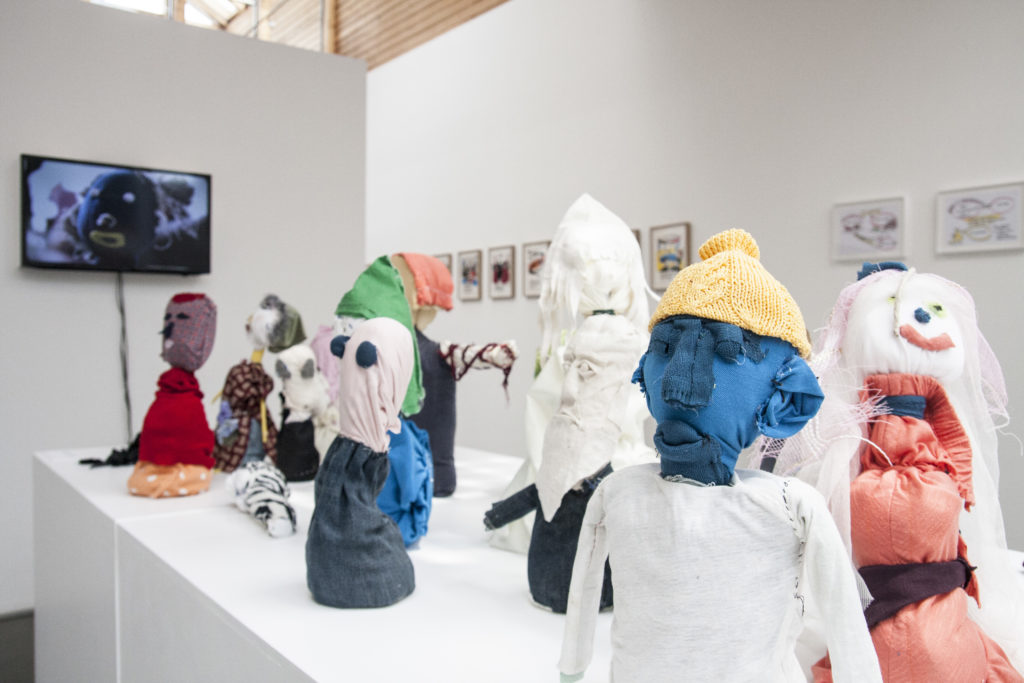 The Mini MOI videos show the process of making the self-portraits, with accompanying audio created by each of the makers. In the 90-second videos, we hear their stories and songs as we see their hands weaving the fabric of community. The self-portraits were made by Con MOI members Pino (Salerno, Italy), Sarda (Senegal), Amadou (Gambia), Moustapha (Niger), Samuel (Cameroon), Ceedy (Ivory Coast), and Mohamed (Sudan).

A year after the initial Wild Energies workshop, PAV exhibited works of Con MOI along with personal works by Kahrl and Potrc. Con MOI was represented by the objects we had created for our various projects, such as a sustainable timeline, the food sharing bike, tee shirts, Mini MOI puppets and video, a documentary short and a map of the places where we have had a presence in the city.

Embracing refugees within a community can strengthen it and create a more secure environment for both residents and new arrivals. The occupied community of Ex MOI is organized with a steering committee, and a number of pop up initiatives, including an ethnic food shop, barber, bike repair, tailor, restaurant, coffee shop, welder and school. The self-organized model of the Ex MOI community can be seen as a roadmap for building a more meaningful, productive and inclusive urban ecology. Contrary to the idea that refugees over burden the city, the refugee community can help us to reconsider problems associated with homelessness, joblessness, waste of resources and social marginalization in a more holistic manner.

The group has since evolved with new members, opportunities and obstacles. Many of the members actively participate in the committee for solidarity of the occupation of Ex MOI. At this time, there is much political turmoil surrounding the occupied settlement with grandstanding, wasted resources and declarations of impending evictions. The government is now taking steps to evict the refugees and there is much skepticism around how this will be carried out. It is a time fraught with uncertainty and distrust, where it behooves us to stand together and acknowledge our differences and our interconnectedness.

After a year and a half of activity in common and sharing practices and intent, Con MOI is now established as a Social Promotion Association and works inside and outside MOI with cultural activities, workshops, and various types of projects. 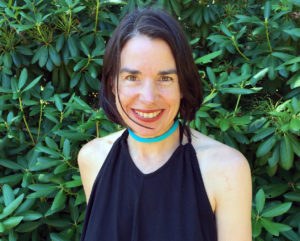 Marguerite Kahrl has lived and worked in Italy since 2002. She is an artist and permaculture designer with two decades of design experience, applying the principles and philosophy of permaculture to living environments and social art projects. In her sculpture, she approaches systems thinking from a playful angle, manipulating symbols, metaphor, and diverse media in order to encourage social engagement. Many of her artistic projects are ‘on site projects’, built as prototypes for activating change.