Reflections on the January, 2017 retreat 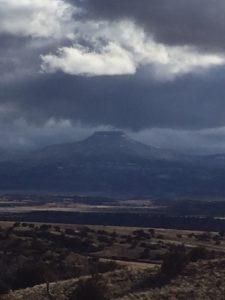 We had the privilege of being in community with Joanna in New Mexico the week that began with Martin Luther King’s birthday and ended on the inauguration of Donald Trump as President of the United States. This just-in-time council of sixty people felt like the coming-of-age of the Work That Reconnects at the intersection of a watershed moment in human and planetary history. Joanna’s theme for the week was “Learning to See in the Dark,” in anticipation of the threshold into darkness on which we stood.

Two and a half months after that gathering, well into the implications of Trump’s reign, ten of us gathered to support one another and reflect on what was seeded at Ghost Ranch.

In one of Joanna’s stories about the early days of the Work That Reconnect, she spoke about the need for what she and her husband Fran called Rough Weather Networks.  They imagined bomb-proof cohorts of friends who would have each others’ backs, who would hold one another’s hearts, who would bow together to the sacred, as the crush of worsening conditions press into our collective lives. During afternoons at Ghost Ranch we met in regional pods, and our Cascadia gang (Oregon and Washington in the U.S.) has evolved into such a network. Our commitment is not separate from a joining with the wider web of like-spirited partners.

What follows is our attempt to fold colleagues and friends who were not at Ghost Ranch into the evolutionary momentum of this cherished body of work. We are linked to each one of you who is honoring our roots and moving the work forward in ways that penetrate and inspire the world that revolves around you.

We are linked to each one of you who is honoring our roots and moving the work forward in ways that penetrate and inspire the world that revolves around you.

Aspects of the gathering that stood out to us:

~The field of solidarity gave rise to spontaneous ritual, such as enactment of recurring nightmares that residents in Hiroshima experience, long after the nuclear explosion. Heroes and heroines of the anti-nuclear movement were honored. Together we digested the threat of nuclear annihilation that Joanna feels is as immediate now as it was in 1945.

~We inaugurated ourselves as bodhisattvas concurrent with the inauguration of Trump, the morning of January 20. We sang and danced, acknowledged the truth of one another, and accepted the mantle of our own leadership roles. That day will be remembered as one of profound blessing and creativity, while much of the world wept in disbelief and horror.

~ Deep gratitude for “sustaining the gaze.” No recoiling or dissassociating from hard truths, standing tall in community amidst the despair in the world. We deliberately stayed present with daily “News from Gaia,” brought to us by climate journalist Dahr Jamail. We practiced conscious breathing patterns while taking in updates of our dire planetary condition. The extent of human-made climate disruption is a new thing for us, as we realize how far along the path of extinction we actually are.

“Like spirit guides on the edges” ~ I painted this image just after our retreat in NM. As our physical bodies made their ways back to our earthly homes, our collective energy and our time at Ghost Ranch remained a part of me- palpable and accessible. I like this feeling- that time bends but our connection continues, and that we can draw on each other as we move forward.~jennrawling.net

One day Joanna asked Dahr what it was like to contain and convey these truths. He broke under the fear for his own safety and the grief he is carrying. The resident fear in the whole group cracked open. The response was voracious care for one another, tracking each one’s whereabouts and well-being real time. Altered states of perception were later reported in which surrounding ancestral guardians became palpable and visibly present in the surrounding rock formations.

~ Joanna shared personal stories about development of the Work That Reconnects in the work that took her and her husband into totalitarian regimes, under the pressures of dark police states. These origins informed our sense of what is needed now in Trumpistan. Harvesting the gifts of our own stories and circumstances revealed that we have ALL been preparing for the unraveling at hand, and are indeed built for these times.  We are HERE.

~ The native roots on which we stood and the rich diversity in the room grounded our experience. Little of this shocking current crisis of facism, oppression, death, fear, incarceration and surveillance is actually new for people of color.  We people of privilege are now getting this; our bubble has burst. It was even posited at one point that women of color will bring this world home.

The relevance of the Work That Reconnects is speeding up at this confluence of environmental destruction, racial and cultural populations at risk, immanent nuclear threat, and run away capitalism…along with unprecedented uprising of resistance and engagement. We marked the following shifts in our work at this juncture:

* Overall it feels like our training wheels came off; the evolution of the Work That Reconnects belongs to us all as we shape it anew to mesh with the political, social and environmental realities that are now facing us.  It will take on new forms as it joins with decolonization movements, climate activism, art installments, MBA programs, dharma studies, leadership training programs, refugee support efforts, etc. It is centered in a universal unfoldment, internalized, reconstituted and owned by many.

The illusory safe space into which folks of white privilege tuck themselves is simply gone.

*Any and all tools for stabilization in traumatic times are welcome and woven into our offerings (breathing work, shaking and tapping practices, cultivation of stillness and interior life, etc.)

*The illusory safe space into which folks of white privilege tuck themselves is simply gone.

*Local grounding of the work is in focus, given the need for community, and precariousness of the internet. No one can take in the magnitude of what is occurring alone.  Joanna’s movement out of the center of the work in coming years is already inspiring regional collaboration and personal stepping up.

*The beauty of Joanna’s eventual leaving is the legacy and space for widespread spiritual awakening amongst us all.

*The cathartic hallmark of our work that digests strong emotional reactions  is morphing into ongoing practices and attention that meet serial tsunamis washing onto our shore. Emotional trauma real time is the doorway through to the steady source of connection—to Gaia and to one another.

*The unraveling we are experiencing is heading into what has been called the Sixth Great Extinction, which may include humans along with a large percentage of the earth’s species. So how shall we live in these times? Joanna in a recent interview (with Dahr) said: “We will come together when we die, but I would love for us to come together before that. [Laughing] I would love for it to be before it’s too late. Or at least long enough so that we can look into each others’ eyes with love.”

Barbara Cecil, who put this article together, at Ghost Ranch.

The little pod of holy outlaws that authored this is looking out at you with love,

Editor’s Note: Click here for another article reflecting on the Ghost Ranch retreat with Joanna Macy.