by Molly Brown and Joanna Macy

This is an expanded version of the “3 Stories” described in Coming Back to Life (2014 edition), p. 5 .  We thank the following people for their help with this revision:  Patricia St Onge,  Sarah Thompson, Kurt Kuhwald, and Aryeh Shell.

It is deep in the human psyche and the vast panoply of human cultures to tell ourselves stories about our world.  A story is the lens by which a group interprets and controls its experience, creating meaning according to the values its members hold and most deeply believe.  A story may be largely unconscious and unquestioned, and even assumed to be the only reality, although no story is inherently complete.

We authors recognize three stories commonly held in the industrialized world today: Business as Usual, the Great Unraveling, and the Great Turning.  All three are boiled-down simplifications of global realities. Nevertheless, taken together, they can offer a useful perspective on the values and beliefs prevalent in the world today.

We have found it helpful in workshops to present these three stories as all happening right now; in that sense, they are all “true.”  Looking through the lenses of these stories can strengthen our understanding of today’s social, political, and economic dynamics, as well as our commitment to collective liberation and the living Earth.

1. Business As Usual is the story of the Industrial Growth Society, and the European-based colonial empires from which it emerged.  It is the dominant enforcing mechanism of a predatory capitalist, imperialist economic system (in other words, the corporate financial military industrial complex) that perpetuates patriarchy and white supremacy for the profit and power of a few.  Many people caught up in the Industrial Growth Society assume this story to be the only reality.   The defining premise, which we hear from politicians, corporations, corporate-controlled media, and the military, is that there is little need to change the way we in the industrialized world live. The central plot is about getting ahead and competing for profit and power by “growing the economy.” Economic recessions, extreme weather conditions, and social unrest are just temporary difficulties from which mainstream society will surely recover and from which corporations can benefit.  This story functions to maintain the power and privilege of “the 1%” while legitimizing the impoverishment and disempowerment of everyone else.

From its beginnings in England three centuries ago, the Industrial Revolution was funded by the enslaving and trafficking of Africans across the Atlantic Ocean, and further enabled by the theft of land and life of indigenous peoples in the Americas, Africa, Australia, and Asia.  Business as Usual discredits the essential labor that enslaved and colonized peoples have contributed to the apparent success of industrialized world, even as it has destroyed their lives, freedom, and cultures.

2. The Great Unraveling is the story told by scientists, journalists, and activists who have not been bought off or intimidated. Drawing attention to the disasters caused by Business As Usual, their accounts give evidence of the on-going derangement and collapse of biological, ecological, economic, and social systems.

The Great Unraveling may be more apparent today, because of the accelerating rate of change and technological advances in communication, but the living systems of Earth have been unraveling for generations–and under colonial expansion and rule, indigenous, brown, black, and impoverished communities have carried the weight of the unraveling for centuries. Refineries, mines, and toxic waste have been sited in and near their communities, with direct and lethal impacts on the health of the people.

Now the climate itself is unraveling world-wide and the sixth great extinction of species is underway.  Hurricanes, earthquakes, floods, and wildfires, amplified by global warming, leave millions of people  without shelter, food, or potable water. Bee colonies are collapsing. Whole ecosystems are being destroyed.  Military operations and conflicts, as well as famine and drought, drive staggering numbers of refugees to flee for their lives across borders, often to be turned away, incarcerated, enslaved, or consigned to refugee camps for years on end. Systemic racism and long-standing cultural and religious enmities flare up, taking an immeasurable toll in human suffering.

3. The story of a Great Turning we hear from some who see the Great Unraveling and don’t want it to have the last word. It involves the emergence of new and creative human responses, as well as a reawakening of sustainable indigenous traditions, that propel the transition from the Industrial Growth Society to a Life Sustaining Society. Attitudes shift from exploitation to respect, from extraction to regeneration, from competition to cooperation. More and more of us come to see how we are interwoven together as peoples, and that solidarity with one another is a way through these crises.  So we join together to act for the sake of life on Earth.

Let us gratefully acknowledge the wisdom of the traditions that came before us, and are re-emerging today, bearing strong witness to the interconnectedness of all life.  Let us also borrow the perspective of future generations and, in that larger context of time, look at how this Great Turning is gaining momentum, accelerated by the choices of countless individuals as they band together in networks and campaigns all over the world.  We can see this happening simultaneously in three areas or dimensions that are mutually reinforcing:

Many people are engaged in all three dimensions of this Great Turning, all of which are necessary for the creation of a life-sustaining and just society.

Molly Brown, M.A., M.Div, Editor of Deep Times, co-authored Coming Back to Life: The Updated Guide to the Work That Reconnects with Joanna Macy. Molly brings ecopsychology, the Work That Reconnects, and psychosynthesis to her work writing books and essays, teaching on-line courses, phone coaching, talks and workshops. Her six books include Growing Whole: Self-realization for the Great Turning and Lighting a Candle: Collected Reflections on a Spiritual Life. With Mutima Imani and Constance Washburn, Molly directs and teaches the Facilitator Development Program for the Work That Reconnects   MollyYoungBrown.com. 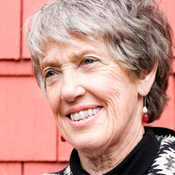 Joanna Macy, is a scholar of Buddhism, general systems theory, and deep ecology. A respected voice in the movements for peace, justice, and ecology, she interweaves her scholarship with five decades of activism. As the root teacher of the Work That Reconnects, she has created a groundbreaking theoretical framework for personal and social change, as well as a powerful workshop methodology for its application. Her wide-ranging work addresses psychological and spiritual issues of the nuclear age, the cultivation of ecological awareness, and the fruitful resonance between Buddhist thought and contemporary science, explored through her books, audio-visual resources, and teachings on the Great Turning.

3 thoughts on “Choosing the Story We Want for Our World”