(Originally published in the Interhelp Network newsletter in September 2017)

I usually think of Michael Rice when I hear “Elm Dance.” I can see him in the circle, stepping back with his right foot purposefully; my mind conjures his focused expression as Latvian words join the guitar melody and we dancers begin to move. The song is Ka Man Klajas. The dance brings activists together in worldwide solidarity.

You are invited to see and share a new “Visual Context” video (42 seconds) that answers:

Side note: The dance evolved from its original form (choreographed by Anastasia Geng) when Joanna and Fran Macy brought it to Novozybkov. Geng created 38 dances that correspond to the Bach flower remedies; elm “is the remedy for people suffering a temporary loss of confidence due to the overwhelming amount of responsibility they have taken on. [. . .] The remedy helps to dispel these feelings so that we can resume our lives without thought of failure.” (Bach Centre)

Geng, who was Latvian, paired her simple circle dances with flower remedies created by Bach, an Englishman.* Given the description of the elm remedy, it is natural that Joanna Macy and the global Work That Reconnects community chose to associate the Elm Dance tradition with intention: “to strengthen our capacity to choose a purpose and follow through on the resolve our hearts have made.”

Below you will find a translation of Latvian to English, in case you’ve ever wondered about the song: “Originally a song of the cultural resistance movement against Soviet occupation, it is a song for liberation and interdependence, a dance for healing and inspiration.” (Venita Robertson, The Elm Dance CD liner notes)

The words’ hidden meaning serve to reinforce the third question below about disposability. The Latvian people may have been considered “disposable” by Russian political leaders–as were the people of Novozybkov.

I’ve loved this dance, its music and its story from Joanna, for 14-plus years. At Interhelp 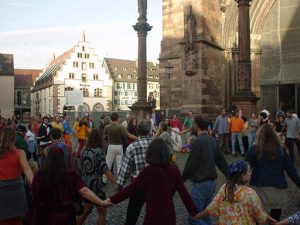 Gatherings and at Rowe, I danced to a fuzzy-sounding cassette tape. With that recording blasting from a boombox, I danced at a vigil for old-growth forest. Later, I joined circles using a crisper CD recording and eventually, an iPod hooked to speakers. When the power winked out during an early-season blizzard, I sang a capella with Paula Hendrick, so that Gathering participants could dance their intentions.

I learned to sing Ka Man Klajas when Carolyn McDade chose to include the song in her recording project Widening Embrace. (I was part of her chorus.) The Latvian language includes sounds that we do not make in English, so to learn the song and poem I would rewind each phrase dozens of times on my “practice CDs” while commuting to work. The words reside in me now, a reminder I carry always.

Because of the Elm Dance, I have studied the Chernobyl disaster avidly from a new perspective. Also I have contributed to the NGO “Viola” that helps people monitor radioactivity and provides health education.

Since my first time dancing, I’ve experienced powerful emotions connected to the Elm Dance practice. But recently my heart and my gut are involved on a much more intense level. Some of these emotions are around the notion of “disposability.” The people of Novozybkov were considered “disposable” (compared to citizens of Moscow), which is why we partake in this dance of remembrance, intention and healing. My exploration continues as questions and reflections arise.

I hope you are interested in exploring the Elm Dance legacy further. I’m curious to see how we “dance forward” together. For now I’ll pose these few questions.

The recording typically used in the Northeast U.S. and elsewhere contains two identical tracks. It is customary that after the pause between tracks, dancers speak as they choose (in random order). Dancers are invited to call out “beings and places in need of healing.”

Question: Recognizing that the pain and grief for beings and places may be experienced very differently depending on participants’ social location, would further instructions be helpful? If so, what do facilitators share?

Question: How do facilitators best invite participation by those in the group who may be differently-abled? (For example, someone who uses a wheelchair.)

Question: How does the idea of “disposability” in Novozybkov connect with other people, beings, and places? How can we use the Elm Dance as an antidote to disposability?

In a conversation with several Work That Reconnects practitioners recently, we discussed whether the use of the Elm Dance could, in any way, be considered “appropriation,” and concluded it was more about “appreciation” than “appropriation.” I am happy to share further details and/or continue the conversation (which inspired me to create the video mentioned above). I welcome your thoughts!

What will you give to me mother for living forever
The little golden apple tree will bloom and ring out like morning mist
What will it to give to you mother dear, that your dear son will not die
There is no answer

The grove of oak trees starts to tremble in the wind
Just the trees prepare for the autumn [i.e., the coming difficult times]
There is no answer

All my jokes evaporate, all jokes fall flat
There is no answer

Only now my feet step more confidently on our own earth
That’s why, friends, how it’s going with me [i.e., No longer kidding around, mind is made up to do something]
May no one at all find out what’s happening with me 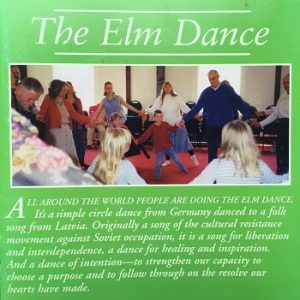 This version is from the liner notes of Venita Robertson’s CD, in which she credits Gunta Lebedoka and Ieva Tararsky for assistance. Other translations can be found on the internet. For example Rosie at St. Paul’s church in Western Australia, who delves into possible interpretations, explains:

“Latvian is a language that was only written down when German missionaries spread the Christian faith in the 1700s, being the last place in North Western Europe to maintain a pagan animistic worship of the land, the seasons and forces of nature. Hence many words in the song have multiple meanings and connotations. This trend towards double meaning was accentuated during the years of Stalinist Soviet rule, where to be too explicit about things could land you in trouble. People became very good at saying one thing and meaning another. The song uses double lines. This is because in the oral tradition, the singer would sing the first line, and the audience sings the second, as there was no way of writing down songs until comparatively recently. Latvia’s rich oral culture was kept alive in this fashion for centuries if not millennia. There are many examples of double meaning in the song.” (This website also offers a MP3 download of the music.)

Want to know more? This story from Joanna, on the workthatreconnects.org site, is the place to begin.

*Physician Dr. Edward Bach, in 1917, “was diagnosed with spleen cancer and given only three months to live. He resisted the disease and the result of his tireless experimenting process was the development of the flower essence therapy. His efforts proved that will and love for work can change the course of an illness.” (Therapeutic Aspects of Musical Education: The Healing Energies of Bach Flower Dances)

Carol Harley is a native New Englander who grew up surrounded by — and influenced by — several acres of quiet forest. (Quiet enough to hear the sap flowing in a Maple, when her mother taught her to listen carefully.) Witnessing the unravelling over decades, she has recently begun the process of awakening to what her Yankee heritage actually means in the context of power, privilege and oppression. In addition to her work
advocating for clean energy solutions, she has been involved in volunteer efforts related to monitoring water quality and stopping violence against women. She discovered Joanna Macy’s work around 2000, and has served on the Interhelp Council since 2003.