Maybe it has happened to you, too, that small secret moment of intimacy with a non-human creature. It’s a powerful experience yet easily dismissed by the mind. The one I want to tell you about happened on a trail in the foothills of the Sierra Nevada in northern California. It is a rocky, spare place, steep and windswept and intensely alive. High on a ridge above a mountain lake, the trail weaves among pines and Douglas Fir growing singly or in small groups, huddled around granite boulders. On a hot late September afternoon, their combined scent rose like incense; the air was charged with it. I walked briskly, enjoying the vigorous motion and the give of the trail surface, changing from rock to needles to bare earth to patches of coarse grasses. I became keenly aware of an added dimension, the arrangement of bodies in the middle distance, so often lost in our habitual focus on panoramic views. I mean by that the sense of my body mass relative to trees and boulders, the way trees stood in twos or threes or alone; a pine and boulder together; or the way the boughs formed a screen so that only slivers of blue were visible, and then suddenly parted to allow a full view of distant peaks. My steps slowed to a walk as I absorbed this new pleasure. My hand reached to touch the furry patch of lichen on a granite boulder, the deep furrow of Douglas Fir bark. I put my arms around a Jeffrey Pine, 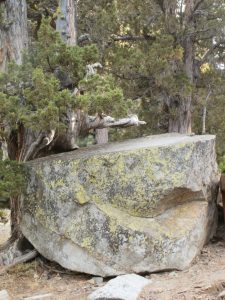 maybe my age in pine years, glowing deep red in the late afternoon light. I laid my cheek against the bark and was enveloped in a light, sweet aroma, like vanilla, very different from the more pungent “conifer” fragrance that rose from the forest as a whole. (I read later that pines, and especially Jeffrey Pines, are unique among North American conifers in distilling this vanilla-like scent.) There we stood for a long while, the pine and I, in a timeless embrace of arms and branches, skin and bark, one breath.

In her book, “The Legacy of Luna”, activist Julia Butterfly Hill describes her relationship with the giant redwood in whose canopy she lived for more than two years in order to save it from being logged. Hill is positive that Luna knew Hill was there to save it, and gave her support in its tree-ish way. Similarly, with my arms around the pine, I felt very strongly, from the tree, a wave of –  encouragement? Support? Was the pine hugging me back? These are human terms and they don’t quite fit. I felt that the pine and the land it sprang from were holding me up, wanted me to continue my work to save the Peace Valley in my home province of British Columbia from being dammed. I was being offered a gift – an experience of joy and unity, and something more: confirmation, confidence and strength to persevere in my work. Joy and gratitude buoyed me as I walked back to the cabin.

Looking back, a year and a half later, I see how this moment marked a turn in my work on the Peace campaign. I felt invigorated, emboldened and supported. My health and energy improved and I was able to take on tasks that would have daunted me before. At the same time, I remained very much aware that the ultimate outcome is beyond my control. I was not “saving” the Peace – not by myself, not even all of us together. We cannot save anyone or anything. The Peace river has its own path. That path, like the path of other beings, may include wounding and suffering. All any of us can do is allow the land to become alive in us, and then act from that place.

All any of us can do is allow the land to become alive in us, and then act from that place.

In a culture less rigidly dualistic than the one that dominates our time, I believe experiences like this would be accepted by the society at large as valid and true. I feel gratitude that moments like these are still able to shine through the cultural conditioning that has been instilled in western peoples over generations, dividing nature from spirit and denying spirit to other creatures. What an impoverishment! Experiences like these bring incredible abundance and depth to our lives. They are our true birthright. 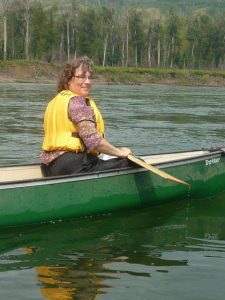 Ana Simeon is an activist, fundraiser and mediator living on Lekwungen traditional territory in Victoria, B.C. Born in Croatia, Ana moved to Canada in 2003, where she soon got involved in The Work that Reconnects, first as a student and then as a facilitator of peer circles. For the past few years Ana’s work has focused on stopping the  Site C dam on the Peace River which would destroy sacred Dane-za sites and hunting grounds, poison fish and drown farmland capable of providing fruits and vegetables sufficient to feed one million people.

3 thoughts on “The Pine and I”