On the first day of class, I told the 16 year-old students in the Social Studies class I teach that I am a member of the Green Party.   I usually don’t talk about politics until later in the year,  and would usually not talk about my own affiliations at all, or at least only when we know each other better, when they know I am not judgmental toward others’ beliefs and stances, but we were discussing the elections in Norway coming up in two weeks, and they asked.  The response was interesting.  One girl blurted out, ‘Oh, I hate them!’  ‘Why is that?’, I asked.  ‘Because they want to take cars out of Oslo.  I want to be able to drive to Oslo.  ‘I know, I said.  I also like driving to Oslo.’    Another boy said, ‘They are ridiculous.  They want to stop drilling for oil.  What are we going to live on?  Fish?’   ‘It’s true, I said, Norway has depended on oil economically.  The loss of oil as an industry will a difficult change.’

I didn’t argue, on the first day of class; we will all have more to say before the election and through the year.  But I did think about what they had said, and how, even why, they had said it.  It reminded me of a clip I saw of Une Bastholm, Norway’s Green party spokeswoman, in a debate this week.  She was powerful, articulate and passionate. She spoke about the need to make large changes in the face of climate change, and she was met by confused and dismissive expressions on the faces of the leaders of both the right and left.   I thought to myself at the time, ‘It’s like she is speaking a different language that they can’t even understand.’

Listening to my students, I reflected on the fact that the language of an ecological imperative is not in their cultural and identity ‘vocabulary.’

Listening to my students, I reflected on the fact that the language of an ecological imperative is not in their cultural and identity ‘vocabulary’.   Our cultural values frame the way we see every situation, and establish our imperatives.  In the first case, a young woman spoke from her personal imperative: ‘I have a right to drive my car.  I want to be able to drive into Oslo.’   In the second, a young man responded within the economic imperative: ‘We need jobs and the economy will suffer if we stop drilling oil.’   Both of these imperatives, the personal and the economic, are driving forces in our culture.  They form a framework, but also boundaries, beyond which it is difficult to make meaning. 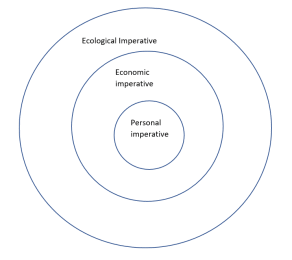 A diagram of the three–personal, economic, and ecological imperatives–form concentric circles where one can include the other but not move beyond its own boundaries: A person operating from a personal imperative is unlikely to care much about economic arguments unless they relate to him or her personally.   Likewise, a person operating from an economic imperative is unable to relate to arguments to arguments from within the ecological imperative, unless they also offer economic gain, or can improve his or her personal situation.   One of the ways, then, to get people to think about ecological change is to appeal to economic or personal advantages.   Help people to see ‘what’s in it for them’, personally or economically, the argument goes, and they will be more likely to relate to and enact ecological change.

This is true, and yet it is not always possible or practical.  People who have petrol cars will be disadvantaged by the move to fossil free mobility, and often it will be those who are also at an economic disadvantage and have not been able to make the move to an electric vehicle, even if they wanted to.   There will be huge change and displacement in the oil industry, and there will be those who suffer losses.  It is difficult to imagine that all of the change that is coming can be presented realistically or honestly or compassionately as an economic or personal plus.

I believe the answers to these questions lies in developing new ecological identity.  Culture changes slowly, but identity shifts can be quicker.  Think of your friend who falls in love, and suddenly it is all about ‘we’ not ‘I’.   People shift identity when they recognize themselves as belonging to something larger than themselves, a new group perhaps, or in this case, the natural world at large.

I have started to answer these questions for myself by creating an institute called The Small Earth Institute here in southern Norway.  I worked for a year to develop my own version of Schumacher College’s deep time walk here in Vestfold.  In the beginning of the year I took 36 teachers from my school on a deep time walk through the Vesterøya nature area, and several responded that they were moved by the experience.  What if teachers develop an ecological imperative that they then share with their students, not by arguing or cajoling but by providing those experiences that move students close to the Earth, out of the separation mentality our culture has engendered, and toward a larger ecological awareness?  What if children grow up in a new cultural framework made possible by new ecological identification? 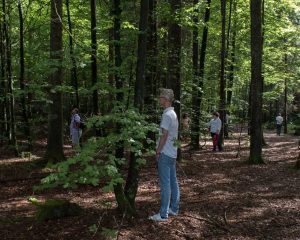 In October I held a seminar for a school in Stavanger that will addressed these issues, and offered soulful and sensual ways of interacting in nature as well as practical activities in the classroom and in the school.  Activities included an appreciation activity inspired by Joanna Macy, a meditative deep time walk with sensual interaction with Earth elements including rock, water, soil and living matter, and forest bathing.  Back indoors, we participated in mindful eating of fruits, nuts and vegetables from our Earth and then in activities that can be replicated in classrooms:  grounding activities, music and dancing, a permaculture ‘observe and interact activity, nature as metaphor and mentor, and finally, the introduction of nature based regenerative design for schools; permaculture principles as tools for design, and the power of poetry, myth, fairy tales and story. 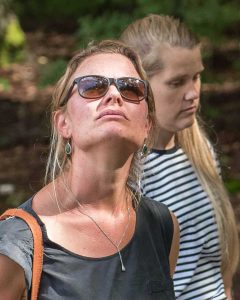 Responses from teachers and others has been good. Teachers spoke of having a new appreciation for nature, and of wanting to promote Earth awareness among students.  One teacher colleague told me she feels that she sees the world differently since the experience. Another friend told me that the deep time walk and forest bathing helped her to feel less overbearing personal grief and overwhelming responsibility, knowing the Earth itself is deeply engaged in billions of years of regeneration.

If anyone has any suggestions for how to help to promote the development of ecological identity, or the desire to be involved in bring deep ecology and regenerative design to schools, I would love to hear it. How did you develop Earth awareness?  What was your ‘Gaia’ moment?  What experiences brought you close to, and made you fall in love with Earth?  How do you connect to Nature and and ecological identity?  How did you develop an ecological imperative?  Where does your earthfulness come from? 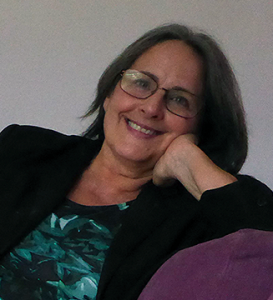 Katharine Burke is an educator, curriculum designer and teacher trainer.  After a Permaculture course in 2016, Katharine became passionate about deep ecology, the work of Arne Næss and Joanna Macy’s Work that Reconnects. She took courses at Schumacher College and with the Regenesis Group and began to design teacher training in regenerative design for schools.  Originally from the U.S., Katharine resided in Cyprus for twenty years and has now lived in Norway for sixteen. She currently lives on a 2-acre permaculture farm in southern Norway and teaches Sociology and Geography at Skagerak International School in Sandefjord. She started The Small Earth Institute in August 2017.

One thought on “An Ecological Imperative”