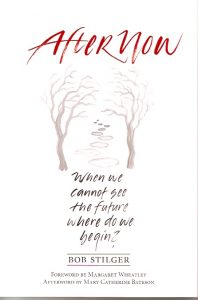 Review of After Now: When We Cannot See the Future, Where Do We Begin?  by Bob Stilger
(Mill City Books, Maitland, FL, 2017)

How does one go forth when the way ahead is a complete mystery? When the past is obliterated, the present is in limbo, and the future is unknowable? When everything has been lost, confusion abounds, and trauma is profound? Bob Stilger went to Japan after the Triple Disasters to explore such questions, and to discern ways he could assist the Japanese in moving forward.  The truly astonishing thing is that he did discover many people who, after losing everything, are somehow finding ways to go forward, step by step, one “next elegant minimum step” at a time. 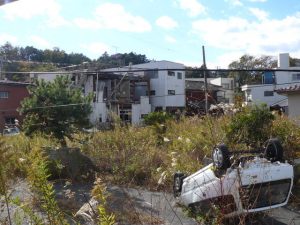 A coastal town that received both tsunami and radiation–3.5 years later still too radioactive to be cleaned up. Photo by Carolyn Treadway

On 3/11/11, a 9.0 magnitude earthquake soon followed by tsunami 50 feet high traveling at 50 miles per hour obliterated much of the coast of northeastern Japan (Tohoku). The next day the third disaster occurred when nuclear power reactors at Fukushima exploded, irradiating a large area of Tohoku. Nearly 20,000 people died and another 500,000 instantly lost their homes, livelihood, and way of life. People experiencing earthquake and tsunami had the guidance of history to help them rebuild, as these natural disasters occurred repeatedly over the previous centuries. But people in areas of nuclear radiation faced a different kind of unknowing and ongoing uncertainty, without guidelines from the past. Cut off from the lives they had, how could they find their way forward?

Bob Stilger spent his senior year of college at Waseda University in Tokyo and has remained deeply connected to Japan. He has both personal and professional relationships there, and also decades of experience in facilitating social change, leadership, and community building across the world. Soon after the Triple Disasters, Bob felt called to return to Japan to help as best he could. After Now describes his careful, tender, insightful work there over six years. His profound work offers us a different paradigm, as it is based on listening rather than on giving advice. We are fortunate that Bob has shared his learning and wisdom with us.

The stories of people whose lives were changed forever by the fateful Triple Disasters are important and relevant to us all. These people are “canaries in the coal mine” for what faces our world today amidst rapidly accelerating climate change and countless environmental and social disasters.  We can learn much from these stories. Altogether, After Now is a breathtaking book—the scope of it takes my breath away.

They paid attention to now—right now, right here, with the people present and the resources on hand

Chapter by chapter, we are invited in depth into the process of change as it moves s-l-o-w-l-y through stages of great unraveling, emergency and rescue, resilience, and the long road ahead. Bob and his colleagues started by talking with many people in many places, listening, listening more–creating space safe enough to share feelings, and ideas.  They asked people what they had, rather than what they needed. They offered their presence to people grappling with colossal loss and also boundless possibilities. Even early on, some people realized that they had been released from a future they did not want. Bob and his colleagues offered practices to help find peace and harmony in difficult times. They paid attention to now—right now, right here, with the people present and the resources on hand, and focused on what was really important, helping them start to co-create from that space.

Slowly and inexorably, the process of change and transformation went on.  The Disasters broke many free from the trance of daily life. Shifts in consciousness occurred about what is meaningful. Connection and working together became crucial in going forward. More places were created where people could connect, dream, and act. This process is more art than science. There is no manual, no path; instead, a path is made by people walking it together, creating it step by step. Relationships and community proved essential to carrying new ideas and actions forward. New futures began to arise everywhere.

After Now provides a fascinating treasure trove of practices and theories for change and community development that Bob has used around the world and in Japan. A short review like this one can only mention some of them. Hopefully you, the reader, will be enticed to learn more by reading the book. These frameworks include: Art of Hosting, FutureSessions, Enspirited Leadership, Berkana’s Life-Affirming Leadership, Two Loops, Theory U, Cynefin, and Active Hope. Yes, Bob is a skilled practitioner of the Work That Reconnects. With others he has introduced the Work That Reconnects to Japan, where it is known as Active Hope. Joanna and Fran Macy and Active Hope are mentioned throughout After Now.

The frameworks are different, but the stages are essentially the same. People come together and live their way into new stories. A few people begin to talk about an idea. They figure out who they should invite to join them. They engage people and use dialog in many forms to help people build trust. They dream and imagine and yearn together, and then bring imagination into physical form, by taking action.

The challenge is to simply take the next step and to open to self, others, and mystery.

This is not an orderly process. Instead it is chaotic, messy, and inconclusive. It takes a great deal of time, and it takes all of us, together. This long term work is ongoing—in Japan, and across the world. Stories of people who have walked their own emerging path mark a path for others. There is no visible destination. The challenge is to simply take the next step and to open to self, others, and mystery.


After Now contains many very powerful stories, as do Bob’s blog entries, articles, and videos that are available on www.resilientjapan.org  and  www.newstories.org . Do look at them!

The stories most impactful to me come from the nuclear disaster area, such as the villages of Itatemura, Minamisoma, Okuma, and Namie.  They convey the horrors of the disasters and also the heroic efforts to rebuild. These stories are particularly compelling to me because I heard some of them directly. I was a participant in Bob’s Learning Journey to Japan in November 2014. It was my second post-disaster visit to Tohoku. I, like Bob, spent my junior year of college in Tokyo, and had maintained relationship with Japan. I, too, had to go to Japan to see the disaster area and to honor the valiant, struggling survivors. I too saw the travesty of denuded Itatemura, a village that was sacrificed to “clean” it.  (Given the “forever” half-lives of many radioactive elements, I do not comprehend how this village could again be in-habitable after 30-40 years as is mentioned on page 231.) 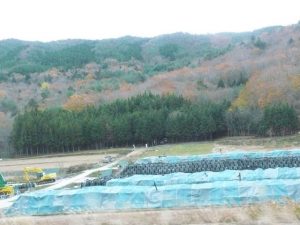 I too saw the enormous stacks of plastic bags, already breaking open, that contain the radioactive waste from “cleaned up” areas, and I felt the futility of  “cleanup” when there is no place to store forever all the waste created in an instant.

The story in After Now that most pierced my heart was told by high-school students from Soma (page 213) who described their post-disaster life: “Before 3.11 we were living ordinary lives, but now we don’t know what is safe. Government says we can plant crops now, but we worry about it. We doubt the safety of the vegetables. We don’t know what we can trust and what we shouldn’t. … We can’t get the truth. (Italics added.) … Our freedom has been stolen. We cannot drink water or breathe the air. If we get pregnant in the future, what if our babies have diseases? We want to have babies, but maybe this is not something that we can realize. “ To me this story so poignantly conveys the ongoing uncertainty they will live in for the rest of their lives, due to health concerns.  As will others who were similarly exposed. These girls are not alone in being deprived of vitally important, trustworthy information about the consequences of nuclear radiation as it unfolds in their region. This secrecy happens all the time in the USA as well.

I have enormous respect for the people who have stayed in, returned to, or gone to Tohoku despite the radiation remaining in the area and the risks that more could be released from the broken nuclear power plants. I honor their choices and their reasons for making them, and admire their commitment to rebuilding their lives in places that are home for them.

When we can speak our grief and let it speak through us, it is the fuel for a future waiting to be born.

Reflecting upon his years of work in Japan, Bob identified seven “stepping stones” in the change process that stood out for him: Stand Up, Stand Together, Go Alone, Hold Hands Across the Generations, Use What We Have, Start Anywhere–Start Now, Grieve What’s Gone. He put grief last, because it is the most powerful. When we can speak our grief and let it speak through us, it is the fuel for a future waiting to be born.


Bob’s idea of grief-as-fuel brings me to the full circle of the ways I think of Tohoku. First I remember the unbelievable, utter devastation of an entire region. Then I am awed by the amazing courage, resilience, dedication, and tenacity of its people. I think of the examples they have set and will continue to set for the rest of the world, as others too confront  disasters that will necessitate going forth into the unknown toward creating a new future.

We Learning Journey participants made a promise to the people of Tohoku who told us their incredible stories: We will never forget you. Indeed we will not. Thank you Bob, for sharing their story with the world through After Now. And thank you for so much more by gifting us with this wonderful book which can companion and help guide our journey after now. Your book is intellectually, emotionally, and aesthetically beautiful. It is a fitting summary of and tribute to your lifetime’s work. 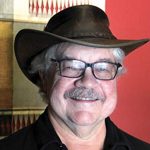 Bob Stilger, Ph.D. is the Founder and Co-President of New Stories, which uses the power of story to help people create thriving resilient communities in many parts of the world. Bob has a PhD in Learning and Change in Human Systems from the California Institute of Integral Studies and teaches at St Mary’s College of California and Gonzaga University. Since 2010 he has worked extensively in Japan, introducing collaborative spaces called “Future Sessions” as well as many participatory leadership processes.  He is the author of When We Can’t See the Future, Where Do We Begin, in Japanese and the English edition AfterNow (reviewed here). http://www.bobstilger.newstories.org

Carolyn Wilbur Treadway is a psychotherapist, family therapist, pastoral counselor, social worker and life coach, now retired after 59 years of facilitating change and growth in people’s lives.  She “speaks for Earth” however she can—as a climate leader and mentor (trained by Al Gore and the Climate Reality Project since 2007), anti-nuclear activist, program presenter, writer, and photographer. Since the mid-1980s she has been part of the Work That Reconnects. With her husband Roy, she lives in Lacey, Washington. Their three children and four young grandchildren constantly fuel her motivation to preserve our precious Earth. Contact her at [email protected].