If you’ve read the May 2017 issue of Deep Times, then you might know that I’ve been offering Work That Reconnects workshops in Colombia since 2013, under the name of “Ecología profunda y Construcción de Paz,” together with a growing number of Colombian co-facilitators. Colombia has known over 50 years of armed conflict, with more then 8 million victims.  I have been in Colombia a short while each year, giving two or three workshops. As far as I could hear and see, they meant a lot to the people involved. It’s important to note that thanks to the support of my own association, Terr’Eveille, and that of a British NGO, we have been able to offer scholarships to people who are so often excluded in Colombia: displaced people, victims, indigenous and afro leaders, human rights and Earth activists, change makers, etc.

Many Colombians feel that they have to seize this window of opportunity to create a culture of peace and reconciliation.

Colombia is at a turning point in history, because it started a Peace process following a Peace Agreement with the FARC-guerrilla in 2016. Although the Agreement is under huge pressure — and will be even more so now that the far right wing candidate Yvan Duque has been chosen as the new President — many Colombians feel that they have to seize this window of opportunity to create a culture of peace and reconciliation. Part of that endeavor will be catalyzed by the Truth and Reconciliation Commission (TRC), that has been installed in the context of the Peace Agreement. The TRC is an autonomous organ, with a three-year mandate (starting in December 2018).  Jesuit father Francisco de Roux, a long time friend, has been appointed President of this TRC, and – what is so interesting – he participated in one of my first Work That Reconnects workshops in 2014. He was so deeply touched by it that he proposed to accompany and co-organise our workshops several times – an incredible gift, since he’s been working for peace in Colombia all his life and has a lot of credit in the country. Last year I told him that if he’d felt that our Work That Reconnects experience could be of any use in the very challenging context of the mission of the TRC,  we as a team would  be prepared to put ourselves at service of this cause. We started working on the idea together with my Colombian collaborators, and that’s how the project “Re-Conectando” came into the world.

In short, we’ll be organizing during three years (starting this summer!) monthly workshops in a beautiful nature reserve not far from Medellin, called Zafra, combining Work That Reconnects, social theatre, and healing rituals, with victims, ex-combatants and other “responsibles” for the violence. We plan for 20 people in each workshop, coming from all of the 27 territories mapped out by the Commission, with a double objective: prepare these people for the hearings to be organized by the TRC with our “eco-psychosocial” workshops (something never done before), and identify amongst them five or six people who are or could be leaders for Truth and Reconciliation in their territory. We will offer them a follow-up meeting in their local community (with Work That Reconnects and other methodologies) so that they can become “ambassadors” of the mandate of the Commission. 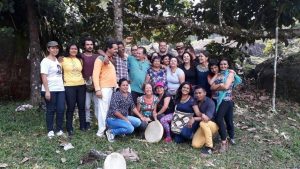 Re-Conectando: a first pilot-project with victims and ex-combatants took place in february 2018, in the nature reserve of Zafra.

We’re almost sure of the financial support of the International Migration Organization (IMO) of the UN, and are looking for others to support our rather ambitious initiative. We’re working intensely to build the foundations of our project, because we want to get the stories of what will happen in our workshops out in Colombia – and in the world! So we’ll make videoclips, radio programs, and try to spread the word as much as possible, to show “It’s happening: reconciliation is possible.”  If you love the Work That Reconnects as I do, you know that this reconciliation goes well beyond the realm of human beings. We hope to invite our traumatized, dehumanized participants to reconcile not only between themselves, but also with Mother Earth. There’s a lot at stake in Colombia with her still astonishing natural, cultural and spiritual treasures.

We hope to invite our traumatized, dehumanized participants to reconcile not only between themselves, but also with Mother Earth. 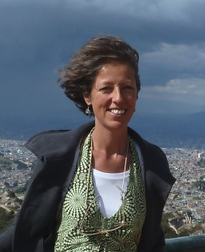 Helena ter Ellen is WTR-facilitator since 2009, cofounder of the Belgium association Terr’Eveille, and translator of Coming Back to Life into Dutch. She’s trained in international politics, intercultural dialogue and psycho-energetic coaching and feels drawn to sacred activism. With experiences as a peace observer in the Middle East & Colombia, she’s actively promoting WTR in this South-American country since 2014, with a clear focus on peace building. She lives since 2016 in a cohousing project in the heart of Brussels, l’Echappée. In that year, she also left her EU job to dedicate herself to the Great Turning and the creation of resilience in times of collapse. In 2018 she co-initiated a new project in Colombia, “Re-Conectando: Laboratorios de Verdad y  Reconciliación en el vientre de la Madre Tierra”, which will involve her living and working in Colombia for more than three years, the time of the mandate of the Commission.

One thought on “Re-Connecting: Laboratories of Truth and Reconciliation in the womb of Mother Earth”