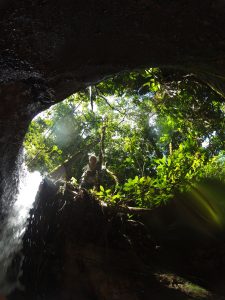 We were two hours away from the border in Ecuador, in a place where the Colombian army has recently killed one of the FARC´s most prominent leaders. Thick jungle. We had found our way there by means of an invitation from an indigenous medicine man to join him in a ceremony in his native land. I had invited my dad as I thought that the medicine offered would serve him well, and as a stepping stone in a process of being closer to my dad. Not acquainted with the nature of the terrain,  my dad had brought along a luggage cart with his belongings and not the sort of backpack needed for a two-hour hike from where we could reach by car. Landing there, we worked with ropes and burlap sacks to create a carrying device for him to take on his path. As we did so, the rest of the group parted and soon after we found ourselves alone in the entrance of a jungle where none of us had ever walked. I lit a leaf of tobacco, to salute and ask for permission as we embarked on the marked trail. Soon after, the trail began to part. Left, right. Left. Where to go? Night was drawing in, and with it a new reign of jungle sounds began to howl. There was little option but to follow an invisible scent on the many crossroads we found, and walk steadily close to the ground. An hour or so went by in complete silence, when suddenly my dad asked “Son, do you know where you are going?” I had no idea, but with the doubt, the scent vanished from my grasp. 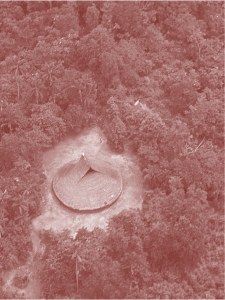 Arial picture of a maloka (a ceremonial house)

Years later, on the opposite side of Colombia, I found myself again among an indigenous tribe and in this occasion, I had the privilege of meeting a wise elder who lived hours away from the closest village, taking care of a small water spring which had a very important significance for this tribe. Fascinated by the opportunity to talk to this man, after his introduction to  the work they do in relation to the land, I ventured to ask “Elder, how can we ‘westerners’ learn to talk and listen to the land?” The man sat in silence. After a couple of minutes he replied “Do you know how many goats did your father prepare for your mother when you were born? How many stacks of wood were needed to warm her up? What clothes were woven? What fruits brought from the land?” No, I replied. “Well, that’s what you need to find out.”

Years later, now father of three, I have come again and again to ponder on the significance that these stories had.

In the jungle, we were soon rescued by part of our group who returned to find us halfway along the path–on the right track.

Where are we heading from here? I now ask. For those who are fathers or mothers, the depth of the question echoes in the lives and caring of our children, as they run, play and laugh.

In evolution threading, this caring for the consciousness and nourishment of our future generations, is the real avant garde.

Culture is renovated in our day-to-day actions, and steadiness and a grounded sense of security are the foundations for our children’s path.

How to cope with the rapid transformation and emergent nature of our current times?

Yet, how to deal with that? How to cope with the rapid transformation and emergent nature of our current times?

The man by the spring hinted the cornerstone of the Great Turning, from the depth  of centuries of communion with the land.

Gratitude is not only revolutionary in regard to mainstream culture, but it sets a new psychological path. It can transform our psyche, which is after all the blueprint for the cultural manifestations we bring forth in our life.

Neither wealth nor recognition can compete with the realness of family love when it is at hand.

Gratitude for our family is one of the essential tokens of grace we are bestowed with, when coming to this land. This recognition can turn our whole economic model upside down as we recognize the richness we already have and that neither wealth nor recognition can compete with the realness of family love when it is at hand. We often become impoverished by our compliance–seeking to gain merits for the entrance to our own life ballroom dance.

And there are challenges. Big challenges. We discussed this often with my mentor and partner in the first project we did in Colombia, regarding WTR methodology for reconciliation and empowerment in contexts of war. We worked for  five years and often found strong mutual questionings when it came to the issue of hope and the intentionality of the visions we dare to have. Of course, we were working with complex contexts, and a lot of the participants’ visions into the future were informed by the experiences they had had. Yet, I struggled and often questioned  the validity of naming and proclaiming perspectives into the future that excluded our co-evolution with the natural realm.

There is a needed innocence in order to fully embrace the visions that the earth wishes us to have.

At such times, I recalled Delphos and the Oracles of the early Greeks who advised and guided with their visions leaders such as Alexander the Great in the decisions in their life. They were children! Girls. The oracles were young girls who had never left the temple. And it struck me, and I come to that image again when I am with my child: there is a needed innocence in order to fully embrace the visions that the earth wishes us to have. Call it naivety- but it’s similar to following an invisible scent on a path we’ve never walked.

There is hope. Gratitude, when anchored to its source, reminds us of a will and power much greater than our own, which amidst its supremacy, loves and has guided and tenderly provided the means and questions for us humans to find our place within this land.

And there is grief. There is also grief. Perhaps the biggest gift I have received in serving this work for these times, is the recognition that this grief opens the heart, and reveals layers of inter-connectedness that are necessary for us to embrace the type of consciousness that is needed for us to grow as humans with nature as our guide.

And questions, there are lots! It’s vital innovation of the most relevant kind. How to move forth as families? How to deal with issues such as health, education,
food, or economy? How to deal with day-to-day issues in a wholesome coherent style, so that we not only respond to the imminent needs that our child may have, but that we do so in a way that also responds to our society’s need for transformation.

It is not an easy task–and it has not been done before. Not in this way. There have been other challenges, as some of the guided meditations in the WTR point out: we have had to learn to make fire, and find food and build our shelters in unknown lands. We can draw from that, but a torch of innocence and bravery is needed to look into the future with our children holding our hands.

And not only theirs, but we need to hold each other’s hands, and together thread forth in the quest of the trail that is granted by the land.

I am often surprised in how little attention is granted to transformational work regarding family life. There seems to be a notion of the big shifts that need to happen out there, and a lot of focus on individual life, but I perceive a gap where a common inertia sinks in, regarding the habits, patterns, and uses of our family time. This is governance. Cultural consciousness in family life is spiritual governance as a friend of mine recently shared.

I want to share with others with a similar “blessed unrest” the questions, intentions, and connections that might help us conjure this path.

We are envision holding a webinar sometime in the first semester of 2019 to explore ways in which we can join forces in this task- if you are interested in taking part, please write to [email protected]. 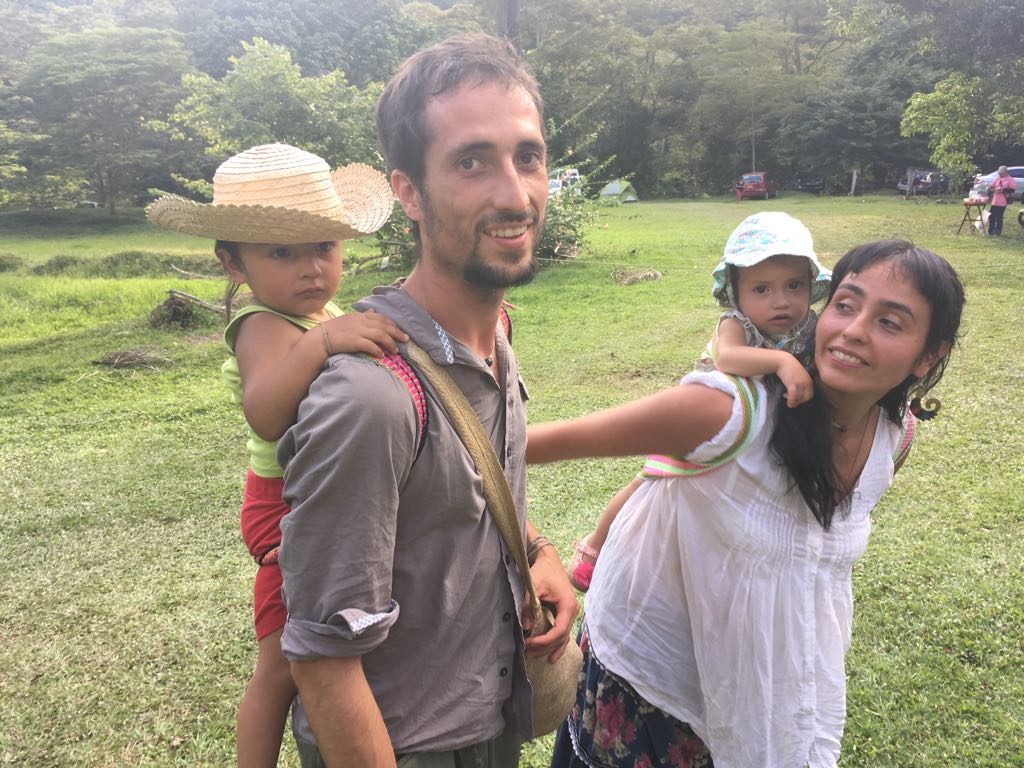 Felipe, Alejandra, and their family

Felipe Medina: I’ve worked for the last five years with communities, organizations, and enterprises in empowerment processes oriented towards a “ecological reclamation of self” and a better approach to the power of our creativity, starting from there.

We developed a 5-year project along with my colleague and mentor Helena Ter Ellen, applying WTR to peace work in Colombia. These experiences have led me to identify families as an acupuncture social point in eco-social transformation, and as a necessary nesting ground for any change to be real. Since 2018 we started working along with my wife, Alejandra, in a project called Families by Nature that aims to inspire, connect and empower families for threading along the Great Turning.

Additionally we work with youth mentoring for Transition and innovation processes for sustainability with companies, communities and organizations.

Alejandra and I live near a town called Guatavita, in the high Andes, along with our three children: Vera, Ananda, and Alun.

3 thoughts on “Deep Ecology: with our kids on our backs”