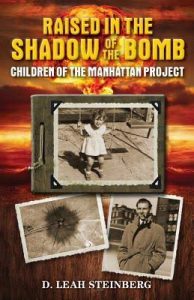 Raised in the Shadow of the Bomb: Children of the Manhattan Project, by D. Leah Steinberg, 2016: Ingram Spark

As the sciences of healing trauma and epigenetics seep into cultural awareness, deep time work, or inner work with our ancestors and descendants, takes on a new and more vibrant meaning. What if the work we do in the “seeing with new/ancient eyes” part of the spiral effects much more than our sociological imagination? What if the Work that Reconnects doesn’t just make us feel better, wipe the brows of the fighters before setting us back out in the activist ring? What if we really do “heal the past in the present moment” as Thich Nhat Hanh says, and our imagining the perspective of our ancestors and our descendants actually connects us with them, gives us more power to change the trajectory of humanity and earth?

These are just some of the questions that arose from a reading of Raised in the Shadow of the Bomb: Children of the Manhattan Project, an informal oral history of children of the physicists and others who secretly labored to develop the atom bomb for the US during World War II. One these children, D. Leah Steinberg, interviewed others, including her siblings and cousins, about what it was like to grow up with parents—mostly fathers—who they did not know at the time were recruited or drafted to work on the bomb.

Across her interviews, Steinberg found themes of guilt or denial about the impacts of the work; the legacy of secrecy and living under constant surveillance (the FBI kept an eye on all of the scientists, in some cases long after the project was complete); perfectionism and the inability or ambivalence about measuring up to their parents’ brilliance, drive, or accomplishment.

Steinberg tries to communicate her own mystical or quantum non-local sense of a deeper meaning of how the scientists were connected before and after death, and their quest for understanding the secret structure of the universe, and their karma for having done so in the destructive form they did. She found that many of the scientists were much more interested in basic science and driven to crack the code of nuclear physics more than they were motivated by the war effort, although most believed they “had to” develop the nuclear bomb before the Germans did.

Denial, it appears, does not insulate children from the truth.

Many were drafted into the project against their will, others felt they had no choice. Many were against the use of the atom bomb against the Japanese, as the Germans had surrendered. Several of the scientists formed the Federation of Atomic Scientists to try to steer policy against nuclear armament, and many of their children took up that mantle, even, in many cases, not knowing the extent of their parents’ involvement in the Manhattan Project or their resistance to the use of the bomb. Denial, it appears, does not insulate children from the truth. As the book’s epigram reminds us, “Your children shall know your fruits” (Virgil).

Oppenheimer said, ‘The physicists have known sin, and this is a knowledge which they cannot lose.’

“The secrecy carried over after the war,” Steinberg quotes descendent Wendy Walin. “We were trained in denial….[T]here’s an awareness that there is this terrible thing in the world and, if we have contributed to it, all we can do is to do something to remedy it.” Steinberg responded, “Oppenheimer said, ‘The physicists have known sin, and this is a knowledge which they cannot lose.’ I believe those ideas carried over to many people: the scientists, their families to some degree, and the rest of the world as well. For some reason, I took on the guilt and it propelled me to this project of my own. ….What are the karmic lessons, what am I supposed to be learning?”

Kristi Grove spoke of her father, John Hite Grove: “I think the fact that they thought he was going to give away secrets destroyed him inside. I believe it created such a deep wound; that’s why he never talked about that aspect of it.” Yet the daughters (more than the sons, in this sample) are willing to talk about the project, its horrors and wounds, including those carried by the weapons designers and their families and communities.

‘Just keep quiet and don’t say anything more about it to anyone.’

Some of them even broke the denial pact as children. Carol Caruthers tells the story of speaking up during a “duck and cover” drill. She told her teacher “with great confidence, ‘Getting under the stairwell won’t protect us from a nuclear bomb.’ She told me to be quiet, that I was scaring everyone half to death. …[W]hen I told my dad what I had said, he told me, ‘Just keep quiet and don’t say anything more about it to anyone.’”

How much energy must it have taken for the whole culture to repress so much fear, and to this day? How much honoring of our pain is needed to redeem those repressed fears and truths? And how much energy for change might be released in the process—might it be like unlocking the bonds of the atom, but of our spirits, our capacity for change?

Karina Lutz is a writer, editor, teacher, and lifelong activist. She helped secure passage of sustainable energy legislation, thwart a proposed megaport, and restore wetlands in her home watershed of Narragansett Bay, RI. In 2013, she received honorable mention from Homebound Publications Poetry Prize for her manuscript, Preliminary Visions. www.yogaforpeace.massageplanet.com