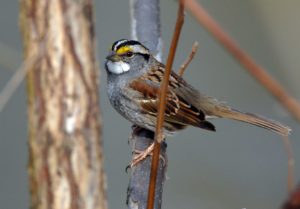 A white-throated sparrow, whose population has declined by an estimated 93 million. (Photo by tcd123usa; licensed under CC BY-NC-ND 2.0)

After I finished writing The Apology, a book in which I wrote a letter from my father to myself apologizing and exploring, explaining in detail all the ways he had abused and harmed me, I realized there was an apology I needed to make — an apology that would force me to confront my deepest sorrow, guilt and shame, an apology that I had been avoiding since I moved out of the city to the woods where I now live with the oaks, locust and weeping willows, Lydia the snapping turtle, running spring water, foxes, deer, coyotes, bears and cardinals and my precious dog, Pablo. It is my offering to you. It is my apology to the Earth, herself.

It began with the article about the birds, the 2.9 billion missing North America birds, the 2.9 billion birds that disappeared and no one noticed. The sparrows, black birds, and swallows who didn’t make it, who weren’t ever born, who stopped flying or singing or making their most ingenious nests, who didn’t perch or peck their gentle beaks into moist black earth. It began with the birds. Hadn’t we even commented in June, James and I that they were hardly here? A kind of eerie quiet had descended. But later they came back. The swarms of barn swallows and the huge ravens landing on the gravel one by one. I know it was after hearing about the birds, that afternoon I crashed my bike. I didn’t want to live without the birds or bees and sparkling flies that light the summer nights. Suddenly falling, falling, unable to prevent the catastrophe ahead, unable to find the brakes or make them work, unable to stop the falling. I fell and spun and realized I had already been falling, that we have been falling, all of us, and crows and conifers and ice caps and expectations — falling and falling and I wanted to keep falling. I didn’t want to be here to witness everything falling, missing, bleaching, burning, drying, disappearing, choking, never blooming.

I didn’t want to live without the birds or bees and sparkling flies that light the summer nights.

But Mother, you had other plans. The bike landed in grass and dirt and bang, I was ten-years-old, fallen in the road, my knees scraped and bloody. And I realized that even then nature was something foreign and cruel, something that could and would hurt me because everything I had ever known or loved that was grand and powerful and beautiful became foreign and cruel and eventually hurt me. Even then I had already been exiled, or so I felt, forever cast out of the forest. I belonged with the broken, the contaminated, the dead.

Maybe it was the sharp pain in my knee and elbow, or the dirt embedded in my new jacket, maybe it was the shock or the realization that death was preferable to the thick tar of grief coagulated in my chest, or maybe it was just the lonely rattling of the spokes of the bicycle wheel still spinning without me. Whatever it was. It broke. It broke. I heard the howling.

Mother, I am the reason the birds are missing. I am the cause of salmon who cannot spawn and the butterflies unable to take their journey home.

Mother, I am the reason the birds are missing. I am the cause of salmon who cannot spawn and the butterflies unable to take their journey home. I am the coral reef bleached death white and the sea boiling with methane. I am the millions running from lands that have dried, forests that are burning or islands drowned in water.

I didn’t see you, Mother. You were nothing to me. My trauma-made arrogance and ambition drove me to that cracking pulsing city. Chasing a dream, chasing the prize, the achievement that would finally prove I wasn’t bad or stupid or nothing or wrong. Oh my Mother, what contempt I had for you. What did you have to offer that would give me status in the market place of ideas and achieving? What could your bare trees offer but the staggering aloneness of winter or greenness I could not receive or bear. I reduced you to weather, an inconvenience, something that got in my way, dirty slush that ruined my overpriced city boots with salt. I refused your invitation, scorned your generosity, held suspicion for your love. I ignored all the ways we used and abused you. I pretended to believe the stories of the fathers who said you had to be tamed and controlled — that you were out to get us.

I press my bruised body down on your grassy belly, breathing me in and out. I have missed you, Mother. I have been away so long. I am sorry. I am so sorry.

I am made of dirt and grit and stars and river, skin, bone, leaf, whiskers and claws. I am a part of you, of this, nothing more or less. I am mycelium, petal pistil and stamen. I am branch and hive and trunk and stone. I am what has been here and what is coming. I am energy and I am dust. I am wave and I am wonder. I am an impulse and an order. I am perfumed peonies and the single parasol tree in the African savannah. I am lavender, dandelion, daisy, dahlia, cosmos, chrysanthemum, pansy, bleeding heart and rose. I am all that has been named and unnamed, all that has been gathered and all that has been left alone. I am all your missing creatures, all the sweet birds never born. I am daughter. I am caretaker. I am fierce defender. I am griever. I am bandit. I am baby. I am supplicant. I am here now, Mother. I am yours. I am yours. I am yours.

© 2019 Eve Ensler. This article was originally published at brainpickings. Deep Times thanks Ms. Ensler for granting permission to reprint this piece. 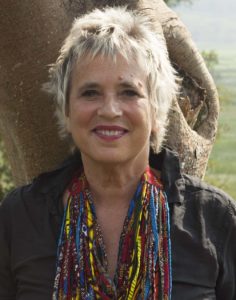 Eve Ensler is the Tony Award-winning playwright, activist, and author of the Obie Award-winning theatrical phenomenon, The Vagina Monologues, published in over 48 languages, performed in over 140 countries. Her plays include Lemonade, Extraordinary Measures, Necessary Targets, OPC, The Good Body,  Emotional Creature and Fruit Trilogy. She recently starred in her one woman play, In the Body of the World adapted from her memoir, at  the Manhattan Theatre Club. Her newly released and  best-selling book, The Apology, has been called “transfixing,” “revelatory,” and “cathartic.” Her writings appear regularly in The Guardian and TIME Magazine. Ensler is founder of V-Day, the 21-year-old global activist movement which has raised over 100 million dollars to end violence against all women and girls—cisgender, transgender and gender non-conforming—and founder of One Billion Rising, the largest global mass action to end gender-based violence in over 200 countries. She is a co-founder of the City of Joy, a revolutionary center for women survivors of violence in the DRC, along with Christine Schuler Deschyrver and  2018 Nobel Peace Prize winner, Dr. Denis Mukwege, all of whom appeared in the award-winning documentary film City of Joy, now on Netflix. Ensler has been named one of Newsweek’s “150 Women Who Changed the World” and The Guardian’s “100 Most Influential Women. A survivor of violence, Eve has dedicated her life to ending violence against all women and girls and mother earth. http://eveensler.org.

One thought on “Letter of Apology to Mother Earth”