Composed during the Blue Mountains fires in Australia, December 2019 *

We read in the local Australian media that the air is toxic, and the pollution levels are dangerous to our health. We read about the microscopic dust and PM2.5 particles. But what are these particles? 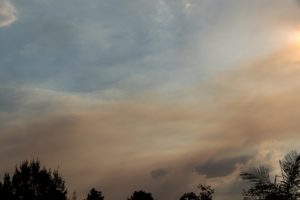 Smoke from bush fires in Australia, 2019.

They are the koalas caught in the burning tree canopies, too slow to escape. The few remaining native animal species that have been able to survive in our colonial-transformed environment.

The smell of the smoke is the one hundred species of eucalyptus trees awarded World Heritage for their outstanding diversity. Along with the living laboratory of Blue Mountains ecosystems formed across millennia. Maybe too the Wollemi pines that avoided extinction for 100 million years.

Our smoke-induced headaches are the 20,000-year-old rock art destroyed in the flames. The Aboriginal sacred sites and songlines of the Dharug, Darkinjung, Gundungurra, Tharawal, Wanaruah and Wiradjuri people.

The pink-red glow of the sunset is the burning peat of the upland swamps that formed over thousands of years, serving as sponges that hold precious water on top of the escarpments. It is the endangered wildlife that live in the swamps, the Blue Mountains water skink and the giant dragonfly.

The sick feeling in our stomachs is the burning of the few remaining pure-bred dingoes. It is the bower that the satin bowerbird built so he could dance for his females, surrounded by painstakingly curated blue objects. 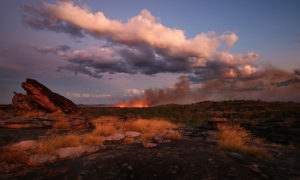 The sting in our eyes is the eastern spinebill, tiny birds too vulnerable to survive the heat. The echidnas engulfed in flames with nowhere to hide.

Our tears are the moisture from the wings of the newly hatched cicadas that just emerged from their seven-year hibernation.

All of them burning, rising, floating, and settling in our lungs. Their lives have become part of ours more than ever before – we denied our connection and we can deny it no longer.

* Inspired by and adapted from Becca Rose Hall’s Fine particles of brilliant forests, burning, written during fires in British Columbia and published by The Dark Mountain Project, Issue 15, 2019.

Editor’s Note: It is so difficult to think of breathing in the particulates of another creature’s burned flesh. And yet, this is simply telling us something we could have known if we thought about it. I want a way to breathe in these breaths on behalf of the creatures who are entering us.  Maybe we can give them life through a promise to become a new kind of stewarding human–so these beings won’t have perished in vain.  (Martha O’Hehir, Deep Times editorial team member)

Author’s comment: The tragic impacts of the wildfires in Australia this summer highlight the urgent need for landscape management that embraces knowledge and traditions of the First Australians who have been here for up to 100,000 years and are the oldest living civilization on earth. The knowledge held by Indigenous communities needs to be integrated with that of western science so the best of both traditions can be brought to bear.

Rosalie Chappie has worked in wildlife and nature conservation for 30 years, including research, university teaching, and running a not-for-profit organisation called the Blue Mountains World Heritage Institute. Rosalie is committed to: nature-based learning and different ways of knowing, especially Indigenous knowledge; education and capacity building for nature conservation that moves beyond today’s dominant paradigms; building personal, social and ecosystem resilience in the face of rapid and dramatic change; and integrating a wide range of knowledge into environmental policy and management for sound and innovative policy and decisions.