There is something compelling about the image of the Fool card in the classic Tarot decks. She, or he, is travelling light with her Dick Whittington backpack-on-a-stick, stepping off into the unknown, with a great sense of adventure. 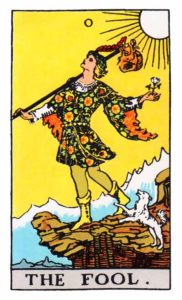 I’m surprised to find myself saying that I love this sense of not-knowing that comes with the great adventure of our times.

As I prepared to facilitate a Work That Reconnects workshop for local Extinction Rebellion groups in West Wales last November, I listened to videos and podcasts of our beloved teacher, Joanna Macy.

I was really struck by this idea: we don’t know whether we’re death doulas, attending the hospice beds of a dying world and a dying humanity, or whether we are midwives attending the birth of a more beautiful world.

The truth is that we don’t know. And we can’t really know which way things are heading. And they seem to be heading in both directions at the same time!

As frightening as all of this seems when it points to the collapse of human society and the death of all life on Earth, it’s also weirdly enlivening for me.

The signs are not good….

This ‘civilisation’ that goes by many names: ‘industrial growth society’, ‘patriarchy’, ‘power-over paradigm’, ‘late-stage neoliberal capitalism’ is devouring itself. Referring to General Systems Theory, Joanna says that any living system that maximises one element only (e.g. profit and monetary growth) is out of whack, unbalanced and bound to collapse.

And there are scientists and learned people who believe that ALL life on earth will go extinct- the sixth mass extinction being faster and more all-consuming than previous ones – more extermination than extinction.  I heard the other day from someone referring to Gaian theorist and deep ecologist Stephan Harding, who said that our living Earth may not have enough left in her for new life to start all over again. Between the previous five mass extinction events, when 75 to 90% of species  disappeared, were periods of many millions of fallow years. And on this time scale Harding believes that our beloved Grandmother Gaia may well be too elderly to give birth to new life one more time.

As frightening as all of this seems when it points to the collapse of human society and the death of all life on Earth, it’s also weirdly enlivening for me. I understand that it means major upheaval and suffering for much life on Earth now, and no doubt all of us later. And another way we might view what’s happening currently is that our conscious awakening to this collective death is akin to humanity’s labour pains. Particularly the chaotic transitional stage I remember when the baby’s head crowned shortly before I gave birth, and I wondered what on Earth was occurring!

Could it be that Gaia’s dying days are happening at the same time as humanity is trying to birth something new?

The signs are good…

The Great Turning, the third great societal revolution that many visionary thinkers have written and are still writing about, is also undoubtedly underway.

When we turn our gaze away from the ‘Business as Usual’ and ‘Great Unravelling’ news that dominates the mainstream media channels (and perhaps also our social media newsfeeds) we can find countless shining examples of the seeds of this great revolution.

From permaculture and regenerative farming, to intentional communities, carbon-free cities, global uprisings of young people, massive reforestation projects, the revival of earth wisdom traditions, the mindfulness movement, ocean clean-ups and local skills-based currencies, these are just a few seeds of ‘the more beautiful world’ that are springing up globally and in very many local communities.

I wonder how many you’re aware of in your own neck of the woods? And those are just the ones you’re aware of. I’m always hearing about inspiring initiatives that weren’t on my radar, as they’re so rarely given the publicity they deserve. Countless folks are quietly getting on with brilliant new and ancient ways of living, being, growing, connecting and regenerating – i.e. acting on behalf of thriving Life on Earth.

And then there are astonishing emergent innovations popping into manifestation all the time, created by the limitless imagnation of the human mind. I’m thinking of social and technological innovations from people like the Bioneers award winners, the young man who invented a device to collect ocean plastic, Treesisters, who are seeding a global reforesting revolution and ‘moss tree sculptures’ in cities, which absorb far more carbon and pollution than trees could if planted on the same small footprint. We so rarely hear about any of these in the mainstream media and need to seek out these myriad positive news stories.

Here in Wales, I’m also thinking of things like our ground-breaking Wellbeing of Future Generations legislation, which all public bodies have to abide by, and which is now also being considered by the UK government.

If only we could see the bigger picture with all these details, like a fractal zoom or hologram, I bet it would blow our despairing hearts and minds wide open. 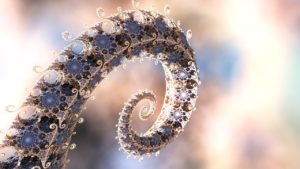 If I may borrow a few terms from visionary people who inspire me: in summary, I believe that we are seeding a regenerative culture, created by a restorer species, and underpinned by the principles of feminine nature-based leadership.

And of course, all of this may well be too little, too late, especially if our Earth herself is dying.

Whether we’re here to witness the death of all we love, or to co-create the new, or whether we are midwiving both ends of life at the same time, it seems that we need these same qualities:

This is what I love:
I am learning to become
More fully human

Karen Scott is a community organiser and activist, living and working in West Wales, her ancestral land and the place where she most feels at home.

She trained to facilitate the Work That Reconnects with Chris Johnstone and Jenny McKewn on the Facilitator Development Adventure in 2012 to 2013 and is deeply grateful to have participated in a residential training camp with Joanna Macy and Chris Johnstone in the summer of 2013.

During 2019 she left her full time paid work and began a transition to being of service in the gift economy. This has included facilitating a variety of WTR workshops for Extinction Rebellion (XR) rebels and joining a national working group that is developing the Work within XR. Inspired by the Shambhala Warrior prophecy, she is currently exploring how it may be possible to take the Work into the mainstream and ‘corridors of power’, beginning with a gift economy offer of WTR workshops to civil servants in Welsh Government. She is also a doting grandmother to twin toddlers, a lover of ocean and forest and a committed TreeSister.

16 thoughts on “What do I love about being alive at this time?”