My friends; I stand here before you as a woman born in the year 2140 in a small settlement on the island formerly known as Britain. I was chosen to travel to your time in order to warn you of the great suffering and disaster that lies ahead in the hope that you may be able to avert at least some of the worst effects of it.

Among the greed and chaos and violence, there were a handful of people who called themselves Shambhala warriors, Bodhisattvas, or eco-warriors.

Our oral traditions tell of your time; among the greed and chaos and violence, there were a handful of people who called themselves Shambhala warriors, Bodhisattvas, or eco-warriors.  We honour the sacrifices that they made in trying to defend life on earth, but their efforts were not enough. The majority of people remained ignorant, silent, and clung to their old Ideas.

I know that this is not what you want to hear, but around a hundred years before I was born, the island on which I live suffered a great series of disasters. The Great Pandemic had already wreaked havoc on the population, on their systems, and on general morale. Then the floods came, and it didn’t take people too long to realise that their leaders had no intention of coming to the rescue. They disappeared in their private helicopters, seeking higher ground while the majority of the population were left to fend for themselves.

My great-grandparents told of a time of great violence and bloodshed, as people fought over food, clean water, and dry land. In the absence of real leadership, the former titles and systems that had been in place for so long crumbled into obscurity and small bands and tribes started to form.

You want me to tell you that everything was OK; that somebody figured out an ingenious way to desalinate the seawater that flooded our shores. That some young genius came up with a way to turn the depleted and cracked soil into a source of nourishment and food for everyone, or that our collective will and love for the earth was enough to heal the pain in all of our hearts – the unresolved wound that cried to us “our grandparents forsook us; they didn’t care about us at all”.

When you grow up on stories of selfish, callous ancestors who valued their own pleasures above the lives of their descendants, it hardens the heart and causes its own type of apathy and callousness. My grandparents saw things, experienced things, even did things that would haunt the dreams of even the hardiest warrior – all for the sake of bringing food and clean water to their own tribes.

We are still heading into extinction.

But what about peace, you ask? Yes, we eventually came to peace. We eventually worked out what had gone wrong, and it is for this reason that I come to speak to you today. But do not think that the fact that we are at peace now means that you can relax, safe in the knowledge that everything works out OK in the end. We are still heading into extinction.

We, as humanity, are barely surviving in pockets around the globe – some of us in communication with each other, but we suspect there are far more of us who are unable to find a way to connect. Most of the waters are still poisoned, most species extinct, and there is still disease, famine, and weather so unpredictable that it is almost impossible for most people to rely on crops. We live more akin to the hunter-gatherers that roamed the earth thousands of years ago.

But yes, there is peace. Some of our elders tell us that this peace came about because of the Great Dream. It was a moment, they tell us, when the majority of the remaining humans received a simultaneous message from the Earth that filled their hearts with love and told them to lay down their weapons. But the more cynical of us, the younger of us who were not alive when this happened, suspect that the fighting stopped because everyone was too malnourished to pick up a weapon. We also have no idea what the majority of the globe is doing; we are able to communicate with parts of the world using relics from your time powered by the Sun, but it is nothing like the tsunami of information that you are familiar with in your time.

But what of the Great Turning, you ask? We do not remember it this way in our oral tradition. There is only the Great Collapse. But I have been given the magnificent task of guiding you in how you might steer your ship differently, so I will tell you where we went so wrong.

The main problem of the 21st century was not fossil fuels or toxic waste or overfishing, but willful ignorance.

We are told that people used to sit and beg for scraps of food on your streets, while others adorned in jewels and expensive fabrics would walk by, avoiding their eyes. It is not that you do not know what is happening, or that you do not understand the effects of climate change, poverty, discrimination, or mass species extinction. Your world is drowning in facts, figures, and statistics – the problem is that you cannot bear to look at those facts. You cannot bear to look at the beggar on your street in his eyes, because you fear the pain that it will strike inside your heart.

Is it true that your society seeks pleasure, bliss and happiness in a way that is almost manic and desperate? That is your willful ignorance. Happiness is not a destination; it is a fleeting state of mind that we must welcome, but trying to live in constant bliss is madness. Is it true that those of you who allow the pain and suffering into your hearts were labelled as defective, and sent to doctors or given medicines to try alleviating the visions? Those are your prophets and sages. Nurture them, listen to them, care for them and give them the space to train their gifts. These people are valued within my community, because they sense things that others can’t and are vital in planning our next steps.

Your world is upside down. You venerate your insane and lock away the only ones who truly see things as they are. Your leaders are tyrants; they hoard wealth and resources for themselves while living in complete disconnection with the land and with their own hearts. We cannot understand how you allowed them to rape the earth for the fleeting benefit of a few; did they do it in secret? Did they distract you? Did they keep you so poor that you had no time or means to fight back? Or was it just your willful ignorance?

You fail to consider the long-term impact of your actions.

But opening your hearts to pain and fear is not enough. You need to open your minds, too. The Creator gave you a brain capable of producing miracles, and yet you fail to see that without electricity, your nuclear facilities will fail and pour toxic waste into the oceans and waters. You fail to consider the long-term impact of your actions, or to ask yourselves what will happen to the thousands of satellites in your sky when the systems that tell them where to go finally fail. When we hear of the amazing technology that was available in your time, we can only ask ourselves – was this truly a lack of intelligence on your behalf, or was it willful ignorance?

My friends, I hope you will not turn away from my words with that same willful ignorance that destroyed the planet. If my words sound harsh, then that is precisely a part of the problem – your world has trained you to tune out things that cause you discomfort, and to seek only the warm embrace of praise and validation.

When you open your heart to the earth’s pain, you will receive far more than you expected.

When you open your heart to the earth’s pain, you will receive far more than you expected. You will receive the full blessings of living with an open heart; an existence far more colourful and deeper than you can imagine. To risk heartbreak is also to live fully, and it is only if you allow yourselves to live with open minds and hearts, rather than trying to avoid the discomfort, that you will have any hope of altering the course of history. 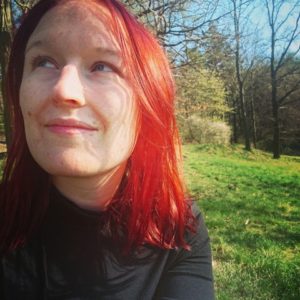 Gwyneth Jones (33) grew up in the magical lands of North Wales, although she currently lives in Prague, Czech Republic. She considers herself a hippie, science nerd, amateur gardener, eco-activist, Positive Psychology and Emotional Intelligence Coach, writer, Work That Reconnects facilitator, host of The Way We Connect podcast, and founder of the Reconnection Revolution group. Gwyneth hopes that we can transition away from the industrial growth society that is destroying our planet and towards a compassionate and sustainable world, but only if we reconnect deeply with ourselves, each other and Nature. (www.gwynethjones.coach)