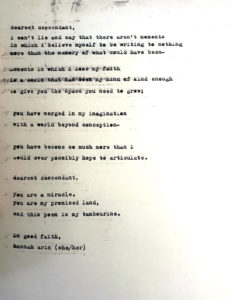 Image: a photo of smudged, yellowed typewritten page of the preamble. Transcription below.

moments in which i lose my faith
in a world that has been my kind of kind enough
to give you the space you need to grow;

you have merged in my imagination
with a world beyond conception—

you have become so much more than i
could ever possibly hope to articulate.

you are my miracle.
you are my promised land,
and this poem is my tambourine. 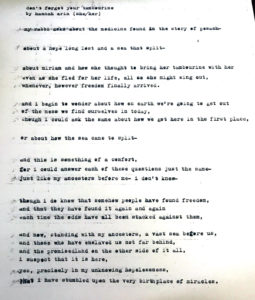 Image: a photo of a smudged, yellowed typewritten page of the poem. Transcription below.

about a hope long lost and a sea that split—

about miriam and how she thought to bring her tambourine w her
even as she fled for her life, all so she might sing out,
whenever, however, freedom finally arrived.

and i begin to wonder about how on earth we’re going to get out
of the mess we find ourselves in today,
though, i could ask the same about how we got here in the first place,

or about how the sea came to split—

and this is something of a comfort,
for i could answer each of these questions just the same—
just like my ancestors before me—i do not know—

though i do know that somehow people have found freedom,
and that they have found it again and again
each time the odds have all been stacked against them,

and now, standing beside my ancestors, with a vast sea before us,
and those who have enslaved us not far behind,
and the promised land on the other side of it all,

i suspect that it could be here,
yes, precisely in my unknowing hopelessness,
that i have stumbled upon the very birthplace of miracles. 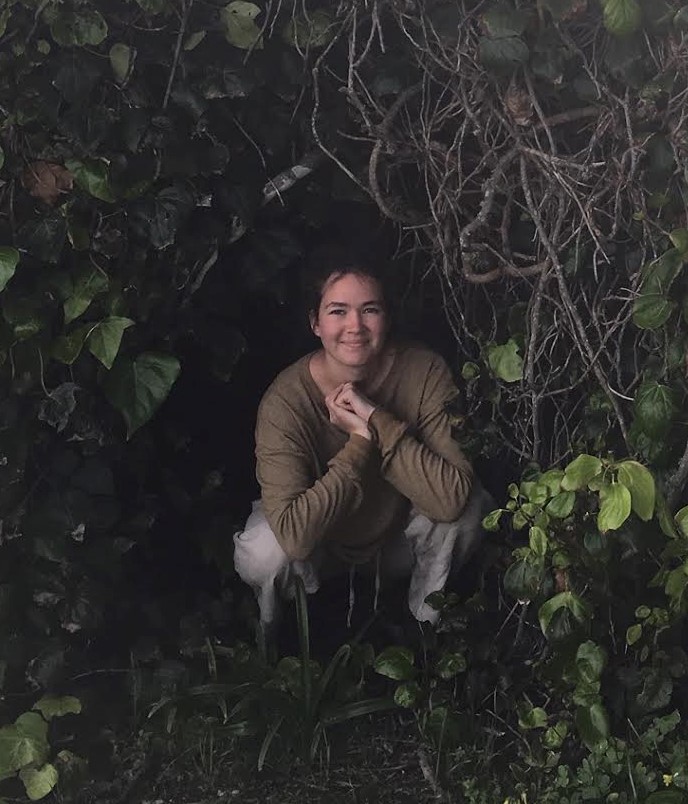 Hannah Arin (she/her, 23) was raised on Hualapai/Southern Paiute land in the suburbs of Las Vegas, Nevada; though her love for ice hockey eventually brought her to boarding school on Mohican Land in Lakeville, Connecticut, where, by her sophomore year, she would wind up quitting the hockey team to pursue an independent study in poetry and spend her free time exploring the woods. After around five years away from Lakeville, Hannah has returned to the area to work and live at High Spirit Community Farm, a residential community where adults with intellectual disabilities and their caregivers live together, farm, and pursue their various passions. She is passionate about poetry, Judaism, story-telling, playing games (including recreational ice hockey), making things with her hands, and learning about plants and constellations, all in the hopes of building a more just and beautiful world—G-d willing, the world our descendants will inhabit.

3 thoughts on “Don’t Forget Your Tambourine”