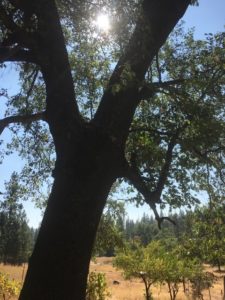 Image: A photograph of a large tree, with the sun shining through the branches, with an open, dry meadow in the background, under a blue sky.

The black oak tree beneath which this letter was written. Photo by Tyler Hess.

I’m writing to you from beneath a black oak tree, a second growth tree in these climate changing lands. It’s still not long in the sweep of time since those of European descent seized this land, ripped her of her gold, and named their county after the skulls of the people who have always been here.

I’ve been trying to make sense of how I’ve come to be here.

I’ve been trying to make sense of how I’ve come to be here. What I can tell you is a family story, one I heard from my great-aunt Mollie. It belongs to our ancestors — Mary and Agnes Bronson — two sisters who married two Buckley brothers in the late 1800s. The brothers’ uncle, William, rushed west, west for gold, deriving great wealth from the theft of land and life. He went on to direct the mining of San Juancito, Honduras from afar, ensconced in New York City, where the gold was taken to. He had no children, so our ancestors received a sizable inheritance. This money still exists in my family today.

there is love in our story, but a forgetfulness of what it is for: to commit oneself to place and people; to remember our belonging in the family of things.

You may know your ancestor, my daughter, was born here in this watershed – this still freshly ravaged mining country – near a gold mine shaft that runs 3000ft deep through the Mother Lode to the sea. It was not long before her birth that I came into my own monetary inheritance: that accumulated hoard of energy our people came to mistake for love. Don’t get me wrong, there is love in our story, but a forgetfulness of what it is for: to commit oneself to place and people; to remember our belonging in the family of things.

I’m writing to you as I want you to know of the decisions we are making now, and why, so that you might understand your place in the story. You may have bloodlines and ancestors of culture, of places not my own, but I write to you as one of solely European descent, a settler for thirteen generations now on Turtle Island. Not so long ago, in 2020, an uprising swept America — never forget this country was named for the love (ame) of riches (rica), and our ancestors were amongst its founders — and the truth of the racial violence that began and sustains this so-called nation was revealed more fully to those who previously weren’t willing to look and see. It gave me a chance, an opening, with our family, to begin the process of transmuting our legacy.

These are your inheritance, your family’s legacy.

The money that came down through our family, gathered by generations of bankers, lawyers, captains of ships and industry, has finally been returned to the people and lands from which it was taken. It is my prayer that you are still connected to the Black and Indigenous villages into which it flowed, that you are shaped by their leadership and that you still find ways to mutually support one another as the world heats and unravels. These villages are refugia of knowledge and wisdom, places where intergenerational trauma was able to be witnessed and healed, where children grew into elders that guided their people onwards. These are your inheritance, your family’s legacy.

Yet do not think the work is over, for I have heard your times are hard, and no doubt some of our unwell ancestors are not yet accounted for. In my lifetime I’ve been working to heal the ones that wrought the wrecking of this continent. Now in yours, you have the chance to go deeper: to harvest the gifts of our ancient European people. You may wrestle (notice “rest” in there) with the ghosts of our people who colonized Europe (like our direct ancestor — through my 13th-great-grandmother Helena Harcourt — the Roman Emperor Charlemagne, who set out to kill and replace the Earth worshipping people of old Europe).

I know you know about such things, for from you I have learned them in dreams.

I know you know about such things, for from you I have learned them in dreams. You future ones, in right relationship with one another and the land, are closer in generations to me than the wise ones who lived long ago. Learning is faster than unlearning, and you were born into a world that required it of you. My own process has been slow, so shaped and formed am I by the domination culture, the industrial growth society, still clinging to power in these times. So I write also to thank you for your teachings. Your knowledge of the birds’ language, your instinct for finding water, your insight into the most resilient seeds for flour, for bread baking – all have helped me greatly. I think you still have my sourdough starter – that is an inheritance too. Began in the pandemic of 2020, I kept it alive through many a Sierra Nevada summer and winter.

I leave you with a song that came to me, trusting you’ll be able to hear it…

Guided by the call to transmute the legacy of her first settler ancestors, Morgan Curtis is dedicated to working with her fellow people with wealth, class and/or white privilege towards redistribution, atonement and reparations. Her work catalyzes the healing of relationship with self, other, family and the land, enabling the release of control so that money and power can move towards social, environmental and economic justice. Her first words of support from her ancestors for this work came through in a Work That Reconnects ritual in 2017. Morgan is a resident of Canticle Farm, an interracial, interfaith, intergenerational community in occupied Ohlone territory (known as Oakland, CA). You can learn more about her work at morganhcurtis.com.