Each spring since the unraveling the students at the school interview the Beforers and make a play about how it used to be. Wade directs it. He’s a young Beforer, relatively, and he once paid to get a degree in theater. He’s good at it. It’s a different play every year and he’s made it a tradition to reanimate some piece of Before junk on the stage. He’s made prop drones and a slot machine with real flashing lights. The kids write the play and they always give him a little part at the beginning, a soliloquy or an old-man dance number and he goes along willingly. He knows it’s funnier when he buys in, too.


The kids think the Before is hilarious.

The kids think the Before is hilarious. They giggle about overnight shipping and write scenes set in Zoom. They can’t get enough stories. Wade tires of telling them, though, and tells them to work with what they have. It’s amazing to him that they don’t yearn for the Before like he sometimes does. He knows this is an indication of their great fortune: that the excesses of his youth are not envied. At last they have all that they need.

Every year while they’re researching a student will ask some variation of the same question: “What is most different between the Before and now?” Wade pretends to think, like he’s spontaneously crafting the answer even though he’s said it repeatedly and he thinks it most true. “We’re on time now,” he says. “We all show up when we say we will. Back then, you could be as late as you wanted. Everyone used excuses. Apologies didn’t mean anything. And sometimes,” Wade’s voice drops, “people wouldn’t show up at all. If you waited all day, you were the schmuck! Not them!” The kids act outraged or shocked or a little skeptical. They ask why, with alarm clocks and taxis and meteorology, anyone could possibly be late. Wade never has an explanation that satisfied them. The whole idea becomes funnier.


The duration of his lifetime, as far as he could hope, would be safe and simple as it is now.

Wade had long ago learned to stop thinking of the Before when he didn’t have to. He could tell the stories, answer questions, and then shut down memories. Otherwise he got sad, sort of nostalgic but tempered by a pragmatic conviction that things would never revert and it was better this way. The duration of his lifetime, as far as he could hope, would be safe and simple as it is now.

The other question the kids always asked was: “What parts are better about living now?” Those answers are innumerable and easily found.

Tonight is the play. Almost the whole town walks a little way from town center down what was once the highway. Infants and old Beforers ride in handcarts. Everyone is on time. Initially, the students had wanted to perform fifty miles out in the desert after Wade made the mistake of telling them about site-specific art. “That would be real Beforing,” they’d said. “A hundred miles for just one night.” Wade convinced them that it was too big an ask and they might not get an audience and, besides, they could find a good piece of slickrock nearby. He’d suggested a crook of the creek at the base of the mesa. They begrudgingly agreed, muttering about artistic visions unrealized. But Wade had been eying this spot for a few years now and it turned out to be the perfect plinth for the play. They’d created worlds of laughter here, rehearsing and anticipating, culminating in this one particular twilight. The sun drags down as disbelief suspends. It could be no other place but here.

The audience is streamside on the grass, spread and lounging on blankets and low-slung chairs. The stage is on the other side of the creek, where the variegated blonde sandstone begins to steepen. Wade and the crew had set fires strategically about. With their glow and the last burnished daylight the set is pearly. Kak and Rey sit among instruments stage right, a fire shining in their faces. Rey pulls at their accordion broadly. At center stage hulks the automobile, this play’s chosen zombified junk. Its rubber tires are flaky and flat and most of the windows gone. In the flickering hypnosis of the theater, however, it looks almost drivable. The pulley system is invisible behind bushes and the track only noticeable if you know where to look. Wade does, but he will be watching the audience when the car’s moment comes. He wants to see their reaction as the engine splutters and the crew tugs from offstage, the car chugging across slickrock. He’s seen it enough. Watching the audience is always the real show.

Jeene has sold all of her popcorn. Dust and Chake’s barrel of beer is divvied up, dispersed among individual mugs. Everyone is seated. Some are already beaming with delight. Mourning doves in the nearby cottonwood fall to silence. The actors are set and ready to play.


Wade knows that someday the Before will not be so important. It will become ancestral, no longer the living memory of anyone still alive. In a hundred years it will be pure story.

Wade knows that someday the Before will not be so important. It will become ancestral, no longer the living memory of anyone still alive. In a hundred years it will be pure story. He feels the detached hope that they will keep being told. Tonight he’s recreated visions from the Before. In the future they will become, finally, myth. The proscenium he borrowed from the stream will be but the stream again. The small fires won’t be stage lights. The sooty sandstone underneath only that: red rock and ashes. Wade looks at the car. He cannot see it as less than its memory yet. Someday, it will be made up entirely of imagination and component parts.


The kids in the wings might remember this story. That, Wade thinks, is the way fables begin. He promises, briefly, to keep improving this place so that some might evade the great turning that the Beforers endured. May the children live easily. The most optimistic future possibilities require heavy, continued work.

Wade leans back into the darkness. Kak’s fiddle joins Rey’s song. There’s nothing new under the sun. The turn of the world is inevitable. And yet, somehow, Wade’s sure he created a bit of it, made it better. In that moment, he knows it’s all he’s ever wanted to do. Just beyond the light of the fires more beauty is promised. There’s more light and more song and more food. We can always be improving. He thinks the word Curtain! and steps on to the stage. 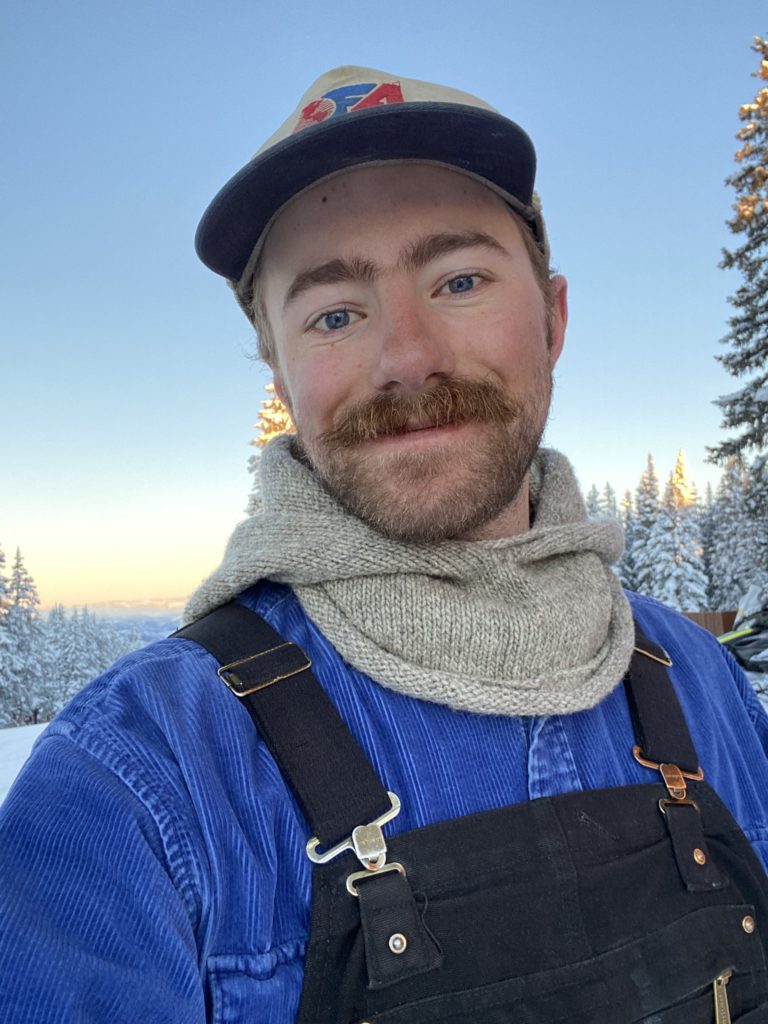 Sam (26) is an organizer, outdoorsmyn and organic farmer living amid sandstone and sagebrush in South Central Utah. He is buoyed by ideals of community resiliency, food sovereignty, and his cows Winston and Pumpkin. A tadpole in a pothole recently asked him whether or not the end-summer monsoons will return. They were both disappointed with his answer: “We will know when it comes.”