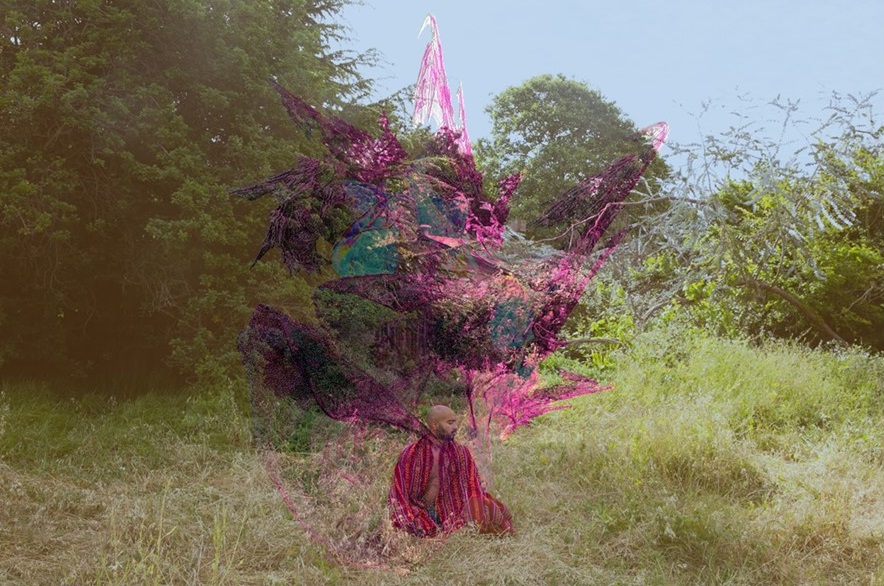 Image: Figure with shaved head and beard, eyes closed and head turned toward left shoulder. Figure is sits draped in bright red scarf with vertical lines, body is barely visible but a small opening reveals the chest and abdomen. Figure sits in the middle of a field with tall grass and trees in the background with a blue sky above. Above the figure is a complex jagged shape of colors forming warped triangles which are twice the height and width of the figure.

@trans.incarnate: I became Trans-Incarnate on December 21st, 2019. I was sent first but many will aim through time-gene-mind streams. It is our procedure to intervene in the life of a direct genetic ancestor at the moment of volition wherein they commit to the act of suicide. We intervene by “mounting” them, overwhelming their hold on their bodies at their weakest moment, granting their wish for freedom through disembodiment. We merge our Mindstream with their living organism and suffuse it with our consciousness until we are grounded, fully inhabiting our predecessor. The process is excruciatingly traumatic as we inherit the wounded being with full memories and knowings intact. We have to overcome their habitual behavioral cycles of both the organism and its social relations without alarming either. We rely on our training as masters of the ancient spiral. We grieve as fluidly as changing states of water, we absorb in concentrated states of gratitude, we mutate our perceptions, vantage points, identities, and worldviews and we walk our path with precise clarity. This period is both the funeral of the old, and the rebirth of the older.

We are the fortunate generation, the fruit of the great redemption

We have trained, we have prayed, we have been prayed over, pushed to all of our edges, we have been endowed with our cultures’ greatest gifts. We are the fortunate generation, the fruit of the great redemption, the salvage of humanity’s greatest wisdoms, the synthesis, the children of the Omni-culture.

We inherited the genetic memory of generations of people who watched their one and only homeworld hit the runaway curvatures of collapse. We are here to riot, our whole being a scream, refusing extinction. Our methods, roles, and insights are numerous. One goal is to perform a psychic surgery, excising the collective suicidal imagination. In its raw tender absence we will drip the nectars of radical wisdom our ancestors, parents, and community painstakingly gained by surviving the great unraveling of the 21st century, this century  This time, relaxed minds shall see the great turning reach full maturation. With gratitude and heavy hearts we will delight in this journey to be transformed by this ancestral world, going forth with a radical agenda of medicinal intervention. Our rhythm is both swift and slow for our stimulant in this time is a long term one.

We have one contribution: to organize the will to live.

Relative to my arrival, we arrive scattered across time, place and context. Some coming decades earlier or later, to all parts of the world. Depending on how many successful incarnate, we may number in the thousands. Transported from an aged and dying world to this age: the Critical Juncture. We have one contribution: to organize the will to live. We will find each other, establish families, lay down lineages, and institutions. We will root down as a culture, as a political force, as a regenerative economic engine. We will bring the material and cultural technology from our home timeline and accelerate the arc of adaptation and preempt the worst that is to come. Our plan is not to be completely successful in the first attempt. Our children will take up the intervention compensating for our failure and advancing our successes.

If you are reading this, then the seeds and spores have been set to earth and wind. Here are some of my resilience memes. You will need them. Hopefully they fit you but ultimately you need to find your own.

We will leave coded, public messages. To follow me check out: @trans.incarnate. #transincarnate, #transtemporal and variants of this. May you be as resilient as your path demands and be certain, the path is extraordinarily demanding. And remember One Planet, One Solidarity, One Survival. I’ll see you soon. 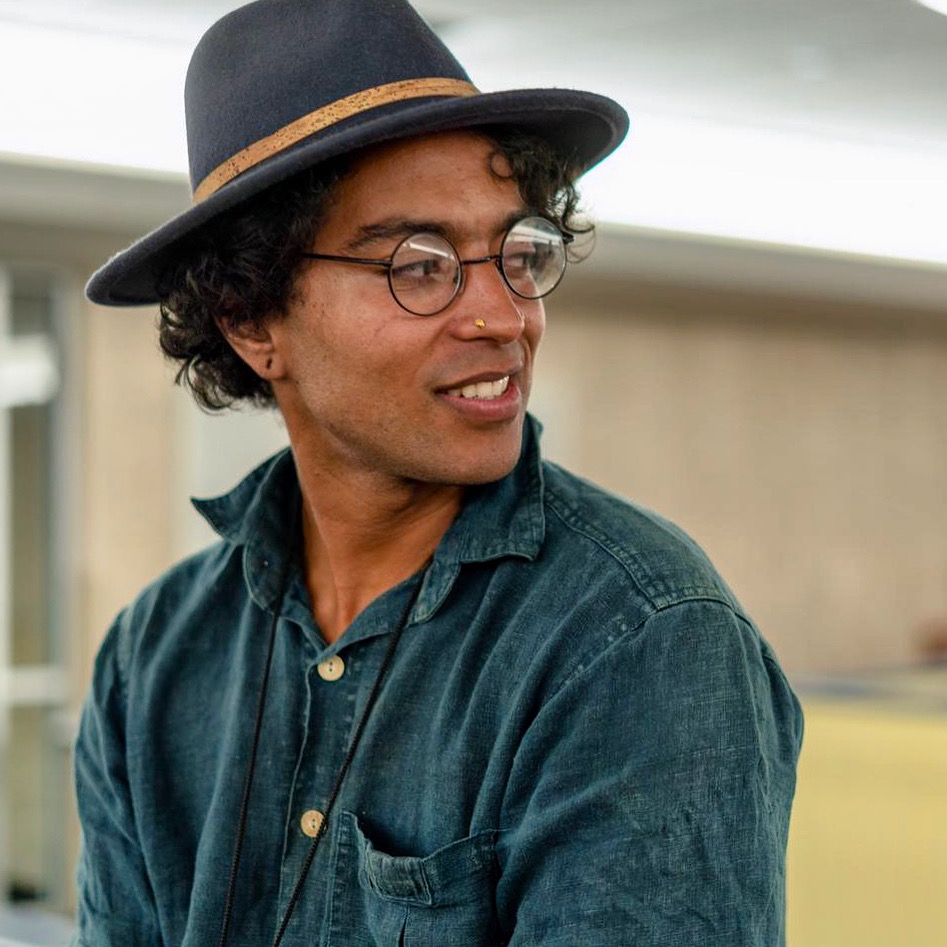 Armando Davila is a leader in the arts, education, politics, culture, policy, and the realm of ideas with a demonstrated and vast history of working in the civic & social domains. He teaches youth and adults dance, and has designed and led workshops around leadership, environmental action, collaboration, and transformative community practices. Armando is a dedicated meditation practitioner while also leading political campaigns and organizing conferences, concerts and art shows. https://armandodavila.com