This piece is an excerpt from “Rhizome Fragments from the Children of Compost,”  an ethnographic collection of ephemera, artistic works, journal entries, scientific recordings, and correspondence from a future community of ecological and political refugees. “Rhizome Fragments” imagines the life of those recuperating the toxic landscape around them and deconstructing the systems of dominations within them. What follows is a pseudo-academic text tracing the lineage of the Children’s practices of inter-species solidarity.

This is an odd thing, assembling ourselves and these words. It is the Rains, a few days out from Ceremony of Light. and the Librarians have gathered up on Elderberry Hill for this annual offering. The solar lights are low, and candles precious — the wild bees, that much quieter this year. We work together, passing the words between us on the table. Sky singing their steady song on the redwood roofing. Amidst bowls of chia and cups of Bay Laurel coffee, between the cigarettes and the quiet, all before the Altar, this draft makes its way to you.

Yes, we’re writing to the past. It’s what we know to do.

In the wake of the Rift — since that Beginning which was neither an End nor anything New — we assembled. Librarians. But instead of curating legacies for the future, the Librarians curate for the times already come. reassembling archives to remake ancestors.

We wonder how the Valley Oaks got where they are in the Laguna.
So we ask them.

It is, of course, at its core, relationship. Indeed, “… the kind of attentiveness we are concerned with here involves one’s whole bodily comportment and a recognition that embodiment is always in relation to social others, both animal and human.”(1) To inhabit these relations is our survival. “Paying attention in this way is not simply an epistemic project ; rather, it is about the difficult work of learning to live well with others in this challenging time.”(2) And challenging it is.

But it is not a new challenge. and these are not new ways. To listen has always been the birthright, and responsibility, of our peoples — preserved when threatened, re-seeded when fertile, an inheritance cutting through time. “We are participants in the more-than-human world, a life-world that is communicative through and through.”(3) and to listen in such a participatory way  — to embrace with curiosity the exquisite particulars of our entanglement in Earth — this is what is needed, for now and for the already gone.

As we walk the ruins of vineyards, fields of squash and beans in the straight lines of where grapes once grew, and the hot air of the desert comes over the Eastern hills, we hear the silence that shaped the Rift. a silence that is a refusal. a silence that is silencing. These olds ways, these embodiments, of relating across and between the fables of species, are in danger:

Consigning creatures to social death sets up conditions of abandonment in which others become standing reserve, deemed to be surplus to requirements, machine-like, finding their lives and bodies taken over for experiments or sacrificed in pursuit of ‘higher purposes.’ Or they just get in the way and ‘we’ decide ‘we’ cannot afford to take the steps that would enable ‘them’ to live sustainably and meaningfully.(4)

This death, this double death, has come before us and is upon us and awaits us. Goldfinches gone. Green Herons and their cackling calls, not heard. the Salmon, struggling. the Mountain Beaver, missing. and, the unassuming ones, too: the Usnea, disappearing. spiders are rare. swathes of grasses shriveling without their spring pollinators. amidst it all, fires growing uncontrollable again. this death, it’s encompassing us. this terrifying after life of the Before. the loudness of the refusal of life echoes in the quiet of the country.

So we ask, and we listen, to whom remains. What is your story, weary Valley Oak? amidst their strewn acorns and sustaining shade, we ask, and we listen. because we know: “… there is no single ‘extinction’ phenomenon. Rather, in each case there is a distinct unraveling of ways of life, a distinctive loss and set of changes and challenges that require situated and case-specific attention.”(5)

We have learned attention in the lesson of the Rift. the loudness of the refusal of life loosened the knots of all the Living, and called us to follow the frayed threads.

However, “there is no former time/space of wholeness to which we might return or which we might resurrect for ourselves … Nor is there a posited future wholeness which might yet save us. Rather, the work of recuperation seeks glimpses of illumination, and aims toward engagement and disclosure. The method works as an alternative both to methods of closure or suspicion and to methods of proposed salvation.”(6)

So we tend the Oak boughs. dig the Brodiaea. we bury the Orioles who collapsed after the drought. we brace for this season’s fires while clearing last years. we listen.

and we need you to.

There will not be a single future;(7) such a disposition is a settler construct and logic of capitalism. the world will shatter into futures, out of necessity. connection will endure, nevertheless. there will be no world but Earth, in each place, in each community and cosmology. Terrapolis indeed.(8) I found my way to writing “Rhizome Fragments” as a practice of imagining into such an abundance of dystopia. the form is a gesture towards the incompleteness and ongoingness of speculation. it is inspired by the speculative fiction of Donna Haraway’s “Camille Stories,” the world-making of Ursula LeGuin’s Always Coming Home, Black-futurist  poetics of Alexis Pauline Gumbs’ M Archive: After the End of the World, as well as the (post)apocalyptic archeology of Andrew Ramer’s Fragments of the Brooklyn Talmud. in line with these thinkers, I believe we do not know what is in store — we must “stay with the trouble.”(9) there are no assurances of a livable future. but this, as the Work that Reconnects reminds us, is what invokes our genuine courage and commitment to a vision of liberation.  so this piece is a transmission from the future as though encountered archeologically — the transmission scrambled, the pieces chipped and strewn, the whole unimaginable. because we only have fragments of a future we cannot fathom the full shape of. but we do know: there will be destruction. and there will be hope. coterminous. 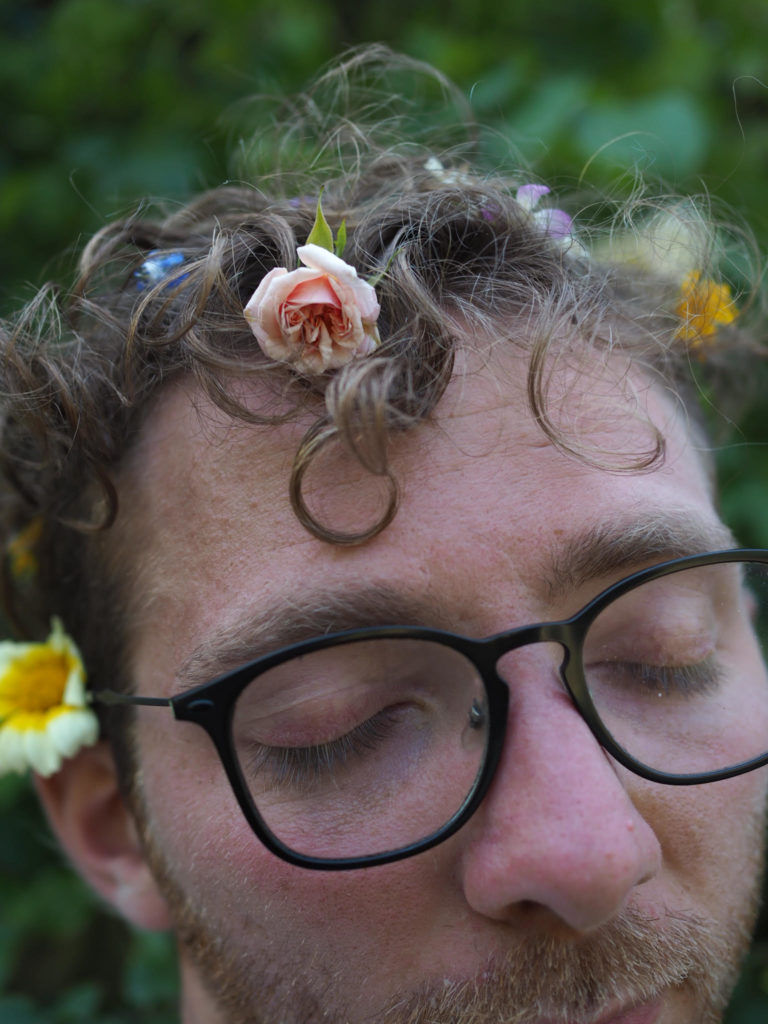 Shlomo Pesach (26, they/them ) is a community organizer , activist theologian , and somatic chaplain devoted to cultivating flourishing fugitive queer futures . Shlomo lives as a white settler on Southern Pomo Land , and traces their ancestry from diasporic Ashkenazi Jewish peoples immigrating from Romania and Poland . Shlomo tends to their inheritance of lineages as a gender-blessed person , as a descendant of Mercury , and as a riparian being. They are neurodivergent , working-class , chronically ill , and transgender , with citizenship and education privilege . They are a co-visionary of and collaborator on the Queer Ecologies Constellation , a multi-regional network and seasonal cohort of LGBTQ2SIA+ and QTBIPOC farmers ,  ecologists , artists , and organizers gathering in study of queer-centered ecology and land-based practices . Shlomo is a member of the inaugural F.I.R.E (Foundations in Resilience Education) Fellowship . Shlomo is an apprentice of bird-language , the tarot , and challah baking . Shlomo also goes by Solomon , Solace , and Salomé .