How can we offer this valuable work to people who might never come to workshops or who don’t have access to them?

Like many of you reading this, I’ve been deeply touched by my experiences in the Work That Reconnects workshops, and seen others deeply touched too. But how can we offer this valuable work to people who might never come to workshops or who don’t have access to them? Joanna Macy and I held this question in mind when we wrote Active Hope. We’ve been delighted that one of the newer forms of the work that has evolved is the Active Hope book group, where the book becomes a co-facilitator in the team supporting groups journeying around the spiral together. We’ve taken this a stage further now, with the launch of the Active Hope MOOC (massive open online course), also known as the Active Hope Foundations Training – a free, video-based online course available at https://activehope.training.

While the Work That Reconnects is often thought of as a form of group work, two growth edges we wanted to develop were drawing on the spiral as a personal practice, and also using it as a framework guiding one-to-one conversations. The course takes participants on a seven-part journey that follows the structure of the spiral. Each of the parts has a main practice that can be carried out either as a personal reflection, in a structured one to one conversation, or as a small group process (see infographic below). The course involves pre-recorded videos, downloadable handouts and a discussion forum, so people can start whenever they want, and if they did one section each week, it would be a seven-week course. If people want to take longer, they’re welcome to move through it at their own pace. 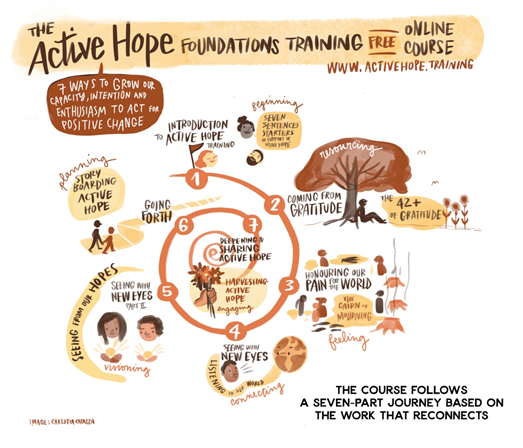 As preparation for producing the course, I set up an ‘Active Hope Conversations Lab’ last year where I tried out various forms of one-to-one spirals. I wanted to develop a conversational practice that people who’d never come across the Work That Reconnects before could engage with easily. The form we’ve developed is called Seven Sentence Starters in Support of Active Hope. It is the first of the seven main practices introduced in the course and gives an overview of the spiral. You can see a demonstration, where two people go through the spiral in less than half an hour, on youtube at this link https://youtu.be/wDz8aYLpIJ8 (this video includes a short introduction). We’ve also used an adaptation of this practice successfully with a group of about two hundred people on a free webinar.

While the video-based trainings won’t be everyone’s cup of tea, we’ve had a great initial response to the course – with over a thousand people taking part so far, and hundreds engaged each week. A survey of those starting the course shows that more than half are either new to the spiral or unfamiliar with it, while over a quarter are very familiar, including some who are experienced facilitators. One of these, Vincent Brown, wrote:

As someone who is deeply involved in the Work That Reconnects and Active Hope, it is very inspiring to see how this course is presented. I enrolled in this course out of curiosity to see how it was formatted for the digital world, however, I already see how my own ways of presenting and facilitating these activities and conversations is expanding, not only in depth but in breadth as well.

There is a magic that can happen when people do the practices in one-to-one conversations.

One way of making the course more effective is for groups of people to do it together, like with Active Hope book groups, but drawing on the videos instead of, or as well as, the book. There is a magic that can happen when people do the practices in one-to-one conversations, and already we know of some facilitators who are developing group journeys drawing on the video-based course. What seems to work well is taking two weeks over each part of the course, with a group gathering either face to face or online each fortnight, and then pairing up group participants to try out that section’s practice one-to-one in the two week gap between group meetings. Barbara Ford and I used this approach when we started running Active Hope book groups together back in 2012. The combination that seems to work particularly well is of the three elements of a group meeting regularly, a series of partnered practices and a third element which could be either the book or the video-based course (or both or something else).

We’ve been able to make this course free of charge thanks to some initial funding from The Emergence Foundation, and also the generosity of the many visiting contributors I interviewed via zoom. We’re working with a ‘pay it forward’ model, where participants receive the course as a gift, and if they’d like to help it remain free for future participants, they’re encouraged to donate to cover future costs.

I’m grateful to everyone who’s played a part in helping create this course, particularly my friend and colleague, Madeleine Young, who played a pivotal role.

The Active Hope Foundations Training can be joined for free at https://activehope.training. 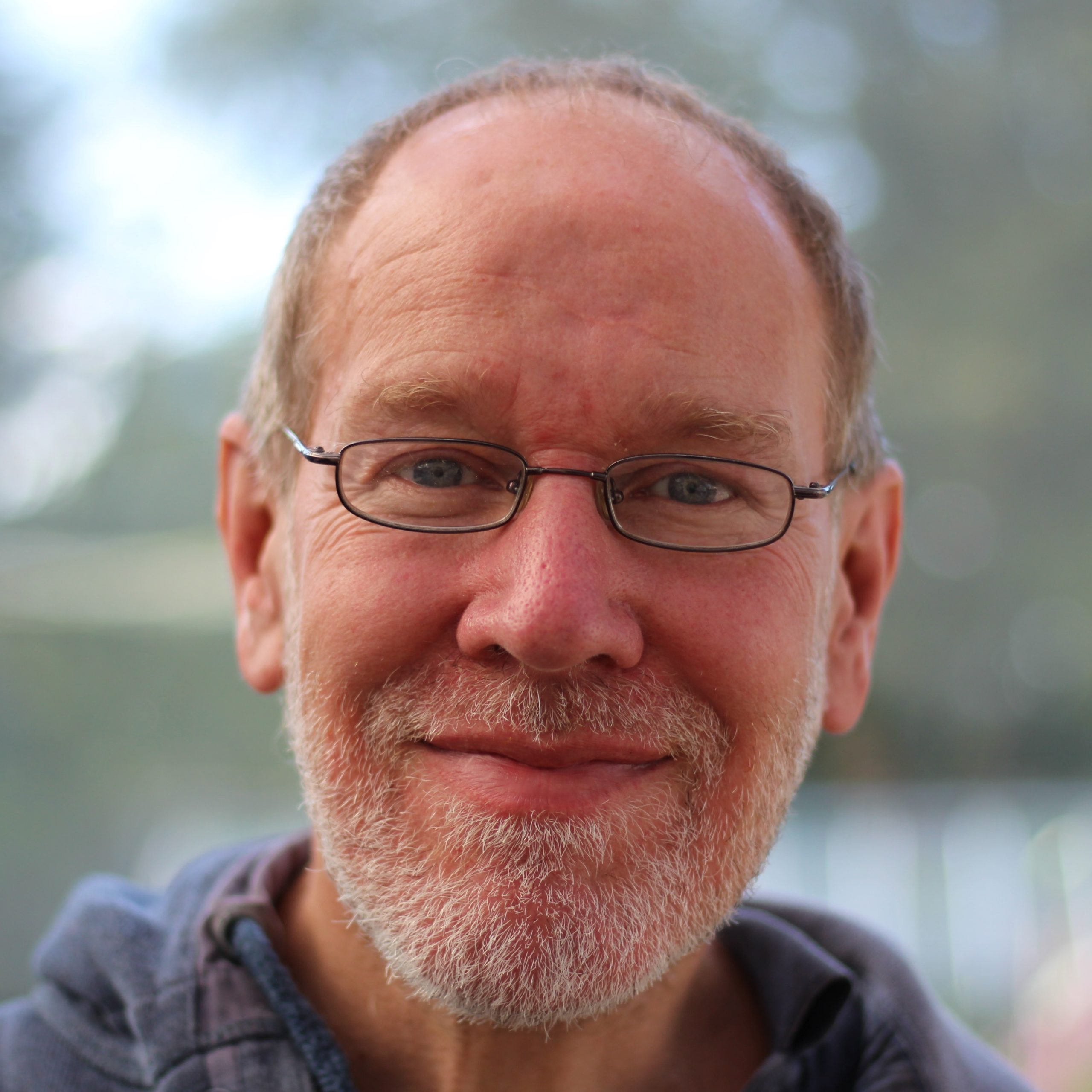 With a background in medicine and psychology, Chris’s work over the last thirty years has focused on exploring what helps us face disturbing situations (whether in our own lives or the world) and respond in ways that contribute to positive change. Involved in facilitating Work That Reconnects related workshops since the 1980s, he is co-author with Joanna Macy of Active Hope (now published in fourteen languages). He also wrote Seven Ways to Build Resilience, his online resilience courses at CollegeOfWellbeing.com and ResilienceTraining.net engaging students from more than sixty countries. He has recently developed a free online course at ActiveHope.Training.