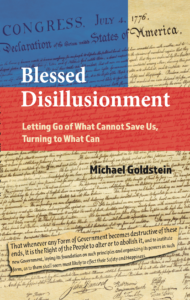 My book, due out this month, was not written with the Work That Reconnects in mind. Yet that work is never far from my awareness: my morning prayer ceremony includes a quick mini-journey through the Spiral. So perhaps I should not have been surprised when a conversation with one of our senior teachers, who had read an advance copy of Blessed Disillusionment: Letting Go of What Cannot Save Us, Turning to What Can, revealed that the Work is implicit in much of the book. The back cover summarizes some of the content:

Decades of electoral work and activism have failed to bring us sustainability, peace, or a just society. The author shows that there is a reason: the political system operates to absorb discontent while averting the transformative structural change we urgently need.

I experience pain for the world when I see daily confirmation of the gross inadequacy of our standard means for seeking social and political change. And that pain—including the forms of it we call frustration—is heightened by watching the enormous amounts of energy and good intentions that are poured into “what cannot save us.”

It can be painful to accept that our democracy is too undemocratic to be fixed in the ways we have been taught.

The book canvasses the limits of protest, other means of trying to get those beholden to the wrong people to do the right thing, and placing new and better people in systems fine-tuned to co-opt, corrupt, and confuse them. It argues that at best these slow our descent into the abyss. It also acknowledges that it can be painful to accept that our democracy is too undemocratic to be fixed in the ways we have been taught, while it contends that those teachings amount to an Invisibility Cloak that hides the real way forward.

Hmm. . . . “Invisibility Cloak.” Perhaps you noticed that an invitation to see with new eyes is coming—as a later chapter of the short offering suggests:

This is the vision that will inspire: To move toward the day when we need protest neither to stop wars, brutality, giveaways, and bailouts, nor to start truly taking care of our citizens and the planet. Government—in whatever form emerges—will have become our own instrument for mobilizing our collective resources in the interests of peace, social justice, economic and health security, environmental justice and sustainability, and a society that is overall hospitable to the needs of the human spirit. And that requires building a movement aimed at displacing and containing those who now dominate our society (to the extent they cannot be won over), developing mechanisms of true democracy along the way, and using those mechanisms to run our own country.

A series of chapters suggesting how to go forth in that direction lays out a plan for helping build that movement. It offers means that are both more effective and more inclusive, respectful, and loving than we often find in our polarized society. Yet those means can largely integrate with the innumerable holding actions, consciousness-raising projects, and work on alternative structures that are already happening all over, as we work to spread a vision of true democratic empowerment.

The book draws directly on many of the concepts we learn and use in the Work That Reconnects, including systems theory, the three narratives of our time, and the holding-actions/new-consciousness/alternative-structures framework.

A member of the Deep Times editorial team suggested that this essay might focus on why I wrote the book. The short version is this: “I just had to.”

For whatever reason, I see a way forward that others are not promoting.

The long version isn’t much longer. For whatever reason, I see a way forward that others are not promoting. Joanna Macy and her early colleagues once called their workshops “From Despair to Empowerment.” My activism began in 1965, and I’ve had plenty to despair about when, on too many occasions, the hopes of tens of millions of us who were in motion were dashed. There is no time left to keep pretending that what at best brings limited and temporary gains can offer real relief to the humans and other beings whom the industrial growth societies are ravaging, or that it can save the rest of us from some version of their fates.

So I hope to help empower those already in motion to step up their game. I also hope to offer a viable path to people who may look apathetic but who actually refrain from engaging at any level because they are too discouraged about the prospects.

A final note: the book is focused on dynamics within the United States. A German friend who has lived for decades in England, however, has assured me that both the analysis of the disease and the prescription for its cure are far more widely applicable. 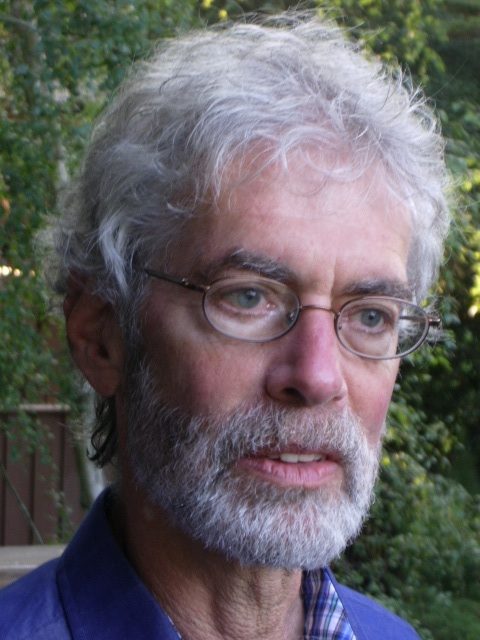 Michael Goldstein graduated from Princeton’s School of Public and International Affairs and Stanford Law School. He has defended men on death row, worked in factories and on highways, and joined Standing Rock water protectors. He threw himself into intensives and workshops by Joanna Macy and other senior teachers of the Work that Reconnects and spearheaded the formation of a peer-lead WTR sangha that met twice a month. His previous book was Return of the Light: A Political Fable in Which the American People Retake Their Country. He lives in Oakland, California.