Last year from December to June, I undertook the incredible Facilitator Development Adventure with Chris Johnstone, Kirsti Norris, Jenny Mackewn in the UK. It was a transformational experience, as much on a personal level as in introducing me to the Work That Reconnects craft.

Last September, I took the opportunity to continue on this path, and join the Facilitation Development Program (FDP) to grow further into the WTR and in particular engage with the “Evolving Edge” of the work. I was called to the course’s intention to pay “special attention to social justice issues and reframing the Work That Reconnects to undo oppression.” Ever since I discovered the Work, I have been interested in it as a potential lever (or “can opener” as Constance Washburn recently called it) for opening up and addressing existing prejudices, entering into spaces authentically, and facilitating the bringing together of diverse groups working together in the Great Turning.  The following is based on my reflections, and those of fellow course participants. With special thanks to Holly Markham for her support with this article, as well as those who shared their experiences.

The most unique aspect of the course has been its online-based nature. As the first cohort to engage in this way with the Work, it was an honor to be part of this experiment in delivering the WTR training. The course structure involves a monthly webinar (tailored to time-zones) with all participants and course facilitators–Constance Washburn, Molly Brown and Mutima Imani–as well as joining a Study Circle (often organized by region and language), topic groups and other online spaces for connecting. Online readings, videos and other resources formed the “homework” which could be read at one’s own pace between the webinars.

It has provided a way to grow our circles beyond our immediate surroundings, and weave webs of support and interconnection.

The delivering of content in this way made the course accessible for those in far flung areas of the globe – seeding the WTR across vast distances – and allowing those who could not travel due to family, work or other reasons, to participate. In this way it has provided a way to grow our circles beyond our immediate surroundings, and weave webs of support and interconnection.

The webinar discussions work was supplemented by more intimate “break-out” smaller groups within the webinars, as well as set online meetings of study circles in-between sessions. These have provided particular support, with guidance provided in the form of structured study questions and points for discussion. Often such questions involved reflecting on the course content, as well as the style of the facilitators – allowing us then to become familiar with the work through direct reference to the way in which the course content was delivered to us as participants.

In striving to bring together such a diverse group, the course has been a source of great value. Simply being able to connect with a tribe of people all across the World sharing the vision, and engaging in the Great Turning – has provided such nourishment, hope and inspiration. In a truly co-evolving and emergent nature, new topic groups were also formed by participants to explore, learn and share together across interest areas.

The online-based nature of the course came with some challenges. In particular, the initial use of a number of different platforms, Slack combined with Basecamp, made things a bit hard to follow and maintain an overview. As well as this, Basecamp’s default settings meant that every discussion input resulted in an email.

However from the very beginning of the course, Constance, Molly and Mutima underlined the spirit of co-creation of the course, and always sought to elicit feedback. This openness combined with wonderful tech support of Nicolas Schoorman and Nikki Hicks meant that solutions were quickly found, and the method adapted to suit the groups needs. Feedback resulted in Basecamp being used as our main channel of communication, and we were given instructions in how to tailor the amount of email updates we received, resulting in a gliding through of the glitches.

As one participant shared, “The positive side is seeing the progress in the facilitators’ own learning curve and their compassion and openness to accept feedback and tweak the course as needed. You can feel their caring presence all the time and no question go unanswered. They also allow us to take it easy: we are not “tested” to see whether we read every article or watched every video, which is great and allows us to take responsibility for what and how we want to learn and change.”

We need only engage in what exactly is our own evolving edge.

Some of the most helpful guidance in the course has been about taking ownership of our own learning. The initially slightly overwhelming feelings and sense of being buried under course material, was soothed by Molly and Mutima’s feedback that we need only engage in what exactly is our own evolving edge, which we hope to grow through engagement with the FDP. For some, the US-focused aspects of the course on institutionalized systemic racism did not seem as relevant to their country of residence, however allowed for personal reflection on internal prejudices and shed new light on how injustices manifest and operate in different ways.

For me growing into the Work is as much a project in inner work, as it is a desire to develop outward skills in facilitation. The Honoring our Pain section, which we have embarked on with in recent webinars, has personally been the most profound so far. We were privileged to have Joanna herself join us for a guest lecture, and I was so glad to be able to ask her for guidance regarding my feelings of apprehension in holding space during times of such despair. Her response, combined with Constance’s astute words underlining again how important it is to rid ourselves of the colonial mindset and the idea that we are somehow not good enough, renewed in me a commitment to not be afraid of the pain of the world, and work in line with my intention to share the WTR so that as with as many people as possible can experience its magic.

The Work, That Reconnects

The course has allowed us to connect across oceans, mountains ranges and huge distances through the challenges of recent months. The online forum, in between webinars provided a space for daily mindfulness check-ins, to develop gratitude practices, share resources as well as a vessel to share feelings coming up during these difficult times.

Feeling alone and lost, I turned to the FDP tribe.

One day, as a hurricane was hitting Ireland (breaking records for the most-easterly Atlantic hurricane), I found myself buried in frustration by the insanity of Business As Usual (BAU), while the Great Unraveling was literally knocking at my door, and deep despair knowing it was knocking much louder at the doors of many others. Feeling alone and lost, I turned to the FDP tribe. A fellow participant, by synchronicity, had sent a message across the line, “Longing for a Truth Mandala Right Now.” In the space opened by their speaking from the heart, I was able to speak to what was sitting with me, to the truth of that moment;

“I feel this so much, especially today – as Ireland is hit by a hurricane, there has been loss of life and much devastation. The same storm winds fanned the forest fires in Portugal and Spain, picking up the ash and turning the sky across the sea in the UK an eerie orange. The media reports on the events as ‘freak’ or ‘unusually warm sea temperatures’ –even though we know this is caused by our changing climate, yet it is not mentioned at all. At the same time I sit writing submissions to our government and the EU asking them to stop plans to fund Liquified “Natural” Gas terminals on the coast of Ireland, to export fracked gas from the US. The dangerous terminals are planned for an area directly impacted by increasing storms here – as well as on the US side export terminals are planned for Texas, another area impacted by climate related weather events.”

The response I received from the group buoyed me, and I have been privileged to reciprocate this. Although some have noted that to be together in person, to look into each other eyes, and connect in an embodied way has been missing from the online experience, we have still been virtually able to hold one another and bear witness to each other’s experiences. We were together as wild forests raged through California, Spain and Portugal, through acts of police brutality, the violence perpetrated by the current US administration in a multitude of forms and various other manifestations of the Great Unraveling in our corners of the globe. The course has been characterized as a space for sharing, for love and support, and through this connection, catharsis and hope.

What a wonderful testament to the Work, that it can transcend distances, time zones, and sometimes shoddy internet connection and still stay true to its intention.

As Joanna once shared, she began and continues the Work so that “when things fall apart, we will not turn on each other.” How beautiful then, that a medium that has been used to spread such vitriol, hate and division in recent times has been reclaimed and recast through the WTR as a way to (re)connect in a deep and meaningful way. What a wonderful testament to the Work, that it can transcend distances, time zones, and sometimes shoddy internet connection and still stay true to its intention. The course has seen people who have never met each other in person, who until a few months ago were complete strangers, reach out with graceful compassion to provide support for one another, find solace in shared experiences of living in these times, and stand together in working to bring the Great Turning into being. 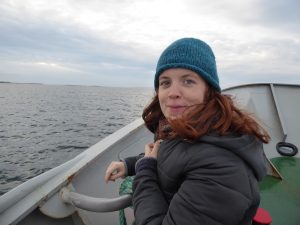 Louise Fitzgerald is a PhD researcher and environmental and climate justice activist based in Dublin, Ireland and Berlin, Germany. A couple of years ago, in a 3am online search for resources to cope in the face of environmental and climate crisis, she stumbled upon Joanna Macy’s 1995 article, “Working Through Environmental Despair,” which spoke to her on such a deep level that she felt called to the Work That Reconnects. Through engagement with the Work she has developed a passion for Systems Theory, Deep Ecology, Spiritual Activism and Active Hope, which she seeks to weave into her academic and activist endeavors. She is extremely grateful for the Work That Reconnects, and all those who continue to contribute to it.