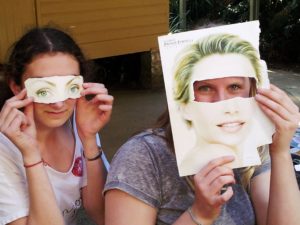 Experiencing the reality of our inter-existence helps us see with new eyes. We can sense how intimately and inextricably we are related to all that is. We can taste our own power to change, and feel the texture of our living connections with past and future generations, with people of all colors and cultures, and with our brother/sister species.

by Ben Stopford
A passionate essay on systems thinking, power-with, and the Ecological Self.

A Prayer to the Sacred Infra-natural

by Michelle Y. Merrill
Introducing a new practice, a prayer/meditation/recitation that explores our human location in deep time and deep space.

To Remember Our True Nature

by Lawrence Toye
Lawrence describes his experiences with and understanding of Deep Ecology, one of the currents of the Work That Reconnects.

by Chris Jordan
Reflections in words and photos on stillness, aloneness, and silence.

And Flowers will Grow in Syria

For a friend fearing that time is up for humanity

by Bianca Crapis
I left my house without an inkling of where I was headed. No route planned for my wander, just a burning desire to leave the house.

A Gift in the Darkness

by Val Silidker
A meditation on the crises of our time, through which we are invited to face ourselves.to see the world through new eyes.

Lilikoi, A Song Of Connection*

A poem by Skye Mandozay

Dancing For Change: The Role of the Body in Creating Community Resilience

by Anna Swisher The author describes how a group of non dancers discovers how to listen to the wisdom of their bodies, to feel and to express our interconnection through the motions of the body.

Purposeful Memoir as Another Doorway into the Work That Reconnects

by Jennifer Browdy, Ph.D. Dr. Browdy, a writer and professor of literature and writing, prompts us to experience the potential and alchemy of each stage of the Spiral, through writing "purposeful memoir." She models how to bring our particular skill set to the co-creation of the Work That Reconnects.

A poem by Toni Spencer.

by Joanna Macy
Root teacher Joanna shares her thoughts and perspectives on the the Great Unraveling and the Great Turning as she perceives them now.

Building Community as a Response to Climate Chaos

by Carmen Rumbaut
Climate chaos is a result of historical oppression and exploitation, yet it presents an opportunity to create a social community structure based on ecological, anti-oppressive ways.

by Beth Remmes
Envisioning a new story for the Great Turning.

To Reinhabit Time in League with the Beings of the Future

by Joanna Macy
Reflections on Deep Time, adapted from World As Lover, World As Self

Deep Time and the Moral Imagination

by Molly Brown
Reflections on how the moral imagination can help us connect to past and future beings for inspiration and guidance.

by Carmen Rumbaut
Seeing with New Eyes is the third step of the spiral in the Work That Reconnects. After feeling

Poem and video by Lyla June
In this music video, spoken-word artist Lyla June offers a poetic reflection on time and the wisdom needed to care for future generations.

by Katharine Burke
A teacher in Norway explores how to "make a case for falling in love with the Earth."

The Pine and I

by Ana Simeon
Maybe it has happened to you, too, that small secret moment of intimacy with a non-human creature.

Remembering Our Essential Goodness: Ecopsychology and the Work that Reconnects

by Emily Swanson
As an ecotherapist, grounding my work in the Work That Reconnects gives me a different story to share -- a story where the spiral has the potential to spin outwards towards openness, healing and life.

Poem: I Am the Monarch Who Finds His Way

Interview by Lisa Siegel
Readers may be interested in hearing from John Seed, the father of the Australian Deep Ecology movement since 1979. Has anything shifted in the nearly 40 years that he has been involved in the Deep Ecology movement? It turns out that, on one hand, “the more things change, the more they stay the same….”, but on the other hand, there may be more impetus now then there has ever been for a radical shift in consciousness.

By Bill Plotkin
“There is no use trying,” said Alice, “one can’t believe impossible things.” “I dare say you haven’t had much practice,” said the Queen. “When I was your age, I always did it for half an hour a day. Why, sometimes I’ve believed as many as six impossible things before breakfast.” ~Lewis Carroll [1]

I Am The River, The River Is Me

by Bruce Meder
The Rights of Nature are beginning to be legally recognized in Aotearoa (New Zealand), thanks to the Indigenous Māori people's long struggle with the government.

Grounding the Work That Reconnects at Ghost Ranch

by Rachel Marco-Havens
My journey to Ghost Ranch began with the Work That Reconnects having already weaved a strong cord through many of my recent experiences. I had a hunch that healing would occur, but found my heart and mind blown by the time I departed.

Owl’s Gift: The Power of Presence

by Kathleen Rude
Deep Ecology teaches us that we are connected to all life on Earth. As we deepen in our awareness and appreciation of our brother/sister species, we expand our sense of belonging and our deep love for the world. This is a story of being gifted with a message of inspiration when most needed, helping the storyteller to see with new eyes.

Poem: The Force Field of Love

by Constance Washburn
I went to Standing Rock over Thanksgiving week, 2016. I traveled in a caravan of RVs and cars from the East Bay in California. There were 24 of us ranging in age from under one year old to over 75. We were kids, parents, grandparents, and singles. We were Native, African, Latino, white, and multi-racial Americans, all drawn together in our desire to be of service to the Indigenous People’s movement to protect the water and stop DAPL,

by Randy Morris
On the evening of December 28th, 2016, an overflow crowd that exceeded expectations gathered in a church sanctuary to begin a new chapter in the history of Communities Rising! (www.communitiesrisingus.org). This is the talk I gave.

Poem: For Susan, Who Encourages This

by Patricia St. Onge
We came over the low rise (which they’ve dubbed ‘facebook hill’), my eyes teared up. I couldn’t help but take a deep breath. There, laid out in front of us, were hundreds of tents, tipis, RV’s and makeshift lean-tos.

Being an Ally Amidst Cultural Genocide

by Daniel Jubelirer
I knew not what I saw when I saw the bulldozers. My brief visit to Standing Rock started out as a trip to deliver supplies …It turned into an eye-opening journey into the heart of the ongoing cultural genocide taking place in our country.

The Ecological Imperative to Love

by Dennis Rivers
The idea that we have a need to care for the entire web of life and people is only beginning to be explored in Western countries.