On January 17, 2019, I returned to work to visit and hold circle with the 18 incarcerated men in my class at San Francisco County Jail #5. I had been away for a month and both the schedule and jail location had changed. Still, I contacted Francisco, my volunteer extraordinaire, and he agreed to join me in the new place at the new time.

These men will spend an average of two years in jail, and during that time they can never go outside, or see the sky.

Francisco had also been away, in Tanzania, on a safari. He’d brought photos he’d taken of the wildlife. “Do you think I can bring them in?” Francisco asked. I said yes, thinking they could be justified as harmless, restorative, and related to my curriculum. Once inside, we arranged the 50- photos around the circle’s centerpiece. The men entered the room and quietly walked the circle, asking permission to handle the photos. I noted that the men’s attention was focused, and they were extra appreciative of the color photos against the drab, windowless jail. These men will spend an average of two years in jail, and during that time they can never go outside, or see the sky.

The guys began asking questions. Francisco described his trip, and what it meant to him to see the animals. The men were rapt. Our circle that afternoon focused on the web of life, and all the while, the men held Francisco’s photos in their hands. We wove wildlife and nature into our entire 2-hour circle. The men spoke longingly of fresh air, clouds, animals, and their desire to live in the wild, rather than jail. Someone said he would live in the wilderness even if it meant death, “Because life without nature is not life.”

The men asked Francisco for a copy of their favorite animal photograph. We made a formal request to the appropriate jail authorities in order to give wildlife photos to the inmates.

As we passed the talking piece, we considered how each of these animals could bring power and solace to our lives.

While waiting for permission to bring the photos in, I continued to hold circle with a focus on animals, nature, and the notion of restoring our bond to mother earth. We discussed how in many native American traditions, people are given or choose an animal as a power animal or spirit guide. As we passed the talking piece, we considered how each of these animals could bring power and solace to our lives. I had made copies of brief descriptions of animals as power animals, and the men read these with interest.

I shared with Francisco that I was stumped as to how we would encourage the men to best embrace their connection to their chosen animals. Francisco responded, “You know Jo, we could do the Council of All Beings.”

“Of course”, I floundered. Why hadn’t I thought of this? Joanna’s Council of All Beings is an exercise that involves participants choosing an animal, and speaking for and through that creature in a council setting. It brings out a groups’ best thinking on how to engage in solving both social and environmental crises.

I called to tell Joanna we were using her exercise, and to invite her to attend the council—which I scheduled for next month. She replied, “Jo, I’m coming to join you!” We planned for a date in March.

To my amazement, permission was granted to share Francisco’s photos, and after just four weeks of waiting, the day came to bring the photos in officially. We entered the pod, nodding and waving to our equally eager participants. I checked in with the deputy and she raised her microphone, about to announce our class. Then an overhead light flickered. Briefly. Once. Phones began ringing, and walkie-talkies sputtered static. All programs were immediately cancelled, due to the possibility of a power outage. Our class was cancelled, so I asked permission to share the sanctioned wildlife photos with the inmates at their cell doors. The Deputy approved.

Francisco and I walked from cell to cell, checking in on each of our 18 participants. The men were pacing behind heavy glass barriers that create their outer cell wall. They appeared calm, but perturbed by the lock-down that prevented us from having class. They appreciated our one-to-one visits, and seemed to cherish the photos.

After the cell visits, Francisco and I went to check out with the deputy. A co-worker had joined her, and they both peeked at the leftover photos in Francisco’s hands. The deputy said, “Oh, yeah, I saw those. We had to review them for clearance. They are cool. I really like the tortoise.”

Her co-worker said, “For me it is the giraffe. I just love giraffes, and have you seen the way that jaguar can take one down? That’s amazing.” Soon they were pouring over the photos, and Francisco asked if they’d like copies.

So there it was: both jailer and jailed need connection with what is wild and connection with the planet. All of us suffer from the human-dominated, command and control worldview.   All of us need to re-invent our humanity, our world, and our definition of justice.

Francisco and I picked up Joanna for the drive to San Bruno. We estimated that the 20-mile drive would take 90 minutes, and it did. Joanna was ready for the day: proper clothing, nothing in her hands, heart and soul present.

I introduced Joanna as an ‘Eco-philosopher,’ environmental activist, and Buddhist scholar. I explained that Joanna’s work makes room for grief; we can’t fully know joy without fully knowing grief. I shared that Joanna sees the earth as sacred; her environmental activism is guided by her spiritual view of life; her work fully embraces the Web of Life. Everyone clapped and thanked Joanna for coming.

Next I introduced the group of incarcerated men as my colleagues, my teachers, and my brothers, and I passed the talking piece, inviting the circle to check in. Francisco, Joanna and I listened and responded with empathy.

Beginning Joanna’s protocol for the Council of All Beings, I introduced the concepts of deep ecology and deep time, stopping to allow participants to ask questions, and for Joanna to share her thoughts. Deep Ecology states that reality is not made up of isolated, random bits, but rather, that each being is part of, and essential to the interconnected whole. I proposed that to embrace the web of life is a radically different way of living; if we really are part of the web, we must care for each other and for the planet.

Deep time is the idea that time is not simply linear, moving in one direction from past to future, with us in the ‘now.’ Modern society values speed, and devalues slowing down. This cuts us off from our ability to use our senses, and to develop creativity. We look at rocks, hills, mountains as just rocks, and fail to see that everything is in motion, if you slow down. Deep time allows us to invoke our ancestors, to invoke our future: to shape our legacy over time. “

We could say some people ‘do time,’ and others ‘do deep time.’

Noticing the potential for metaphor, I added, “We say some people ‘just do time,’ while others make the most of their incarceration, reaching into themselves, their past, and their future.” I suggested, “We could say some people ‘do time,’ and others ‘do deep time.’”

A Council of All Beings

Finally, I announced, as planned, we would transition away from two-legged existence, and welcome the animals each man had been studying. I established myself as the human circle keeper, and I would be a circle keeper as coyote, too. Mick offered to drum on his plastic chair, and I invited movement and sound to represent the animals. Nico, as owl, jumped on a chair and began rapping. Brandon scurried around gathering items like a squirrel. Paul slumped in his chair, playing dead like a possum.

After a few minutes, I welcomed the animals to sit in circle. I opened with a question. “Please introduce your animal and its sound and/or movement, and its characteristics.” I demonstrated, “I am coyote; I travel by night. I am a trickster and a rule-breaker.” I howled! Then, passing the talking piece around the circle, we heard each animal’s sound, its qualities and attributes: the hunters (wolf, lion, alligator), those with night vision (panther, owl), the leaders (antelope, bear) and the uncommonly generous (turkey). Addressing those who had not yet spoken, Joanna added the prompt, “What do you love about being this animal?” Snake and butterfly spoke of the skill of transformation. Crow expressed his desire to step outside of human law, to bring peace.

Next I asked for volunteers to represent humans, to sit in the center of the circle and not speak, noting that this could be a difficult task and no one needed to stay longer than they wished. Two men volunteered, and as they tired of the post, they asked for replacements. I invited the animal participants to explain to the humans, “How do you see life on earth at the present time? What are the issues/problems/opportunities?” We heard about pollution of the environment, scarcity of wild lands, violence, and human greed dominating the world.

As a final round I asked, “What are the gifts/skills we can pass on to the two-legged?” Turtle offered patience, and told humans to take their time.

Pig said, “See me for who I am, don’t misunderstand me.”

Possum suggested to humans, “Learn to play the game.”

“You humans are experiencing a chemical imbalance!” said Owl.

Lion reminded us, “Enjoy the sensuality of gender.” 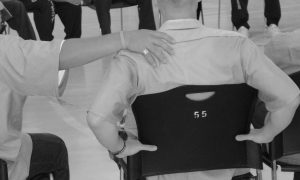 Finally as our circle time ended, Mick drummed us back into our human form. We shed our animal skins, and we passed the talking piece again, performing our check-out round and thanking Joanna for the exercise. During the check-out, someone said, “We really are responsible for the planet, and we should take action.”

Someone else said, “This helps me appreciate life and demonstrates everyone can be selfless.”

Another man said, “We are connected.”

And another spoke, “We have wisdom.”

One thought on “Holding a Council Of All Beings, Behind Bars”