In October, 2020, Work That Reconnects facilitators Sarah Nahar and Mordechai Liebling sent the following invitation to the facilitators’ network:

You’re invited to sign up for a small group process, guided by experienced facilitators, to move through a despair and empowerment spiral to process the intensity of the current moment–the societal impacts of this US presidential election in the midst of climate chaos–and recenter, reground, and refresh in order to take empowered action.

I contacted Valerie Martin, with whom I co-facilitate a monthly Gathering for Gaia web-based Work That Reconnects workshop and quickly confirmed that she and I would sign up for the training. We both appreciated and enjoyed the training and the outline Sarah and Morechai provided for the workshop we led on Nov 19. I learned later that over two hundred people joined one of the mini-workshops that were offered over three weeks in November, many experiencing the Work That Reconnects for the first time.

The following article draws from my interview with Mordechai in January 2021, and Sarah’s comments on my interview notes, about the training they offered. 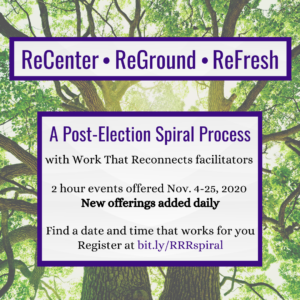 Sarah and Mordechai introduce themselves:

Rabbi Mordechai Liebling is the Director of the Reflection and Renewal Process at POWER Interfaith, the largest faith-based community organizing network in Pennsylvania and a trainer for confronting racism, antisemitism and Christian hegemony.

A spiral process is something the Work That Reconnects community had to offer as a major resource in the lead-up-to and wake of the election.

Mordechai told me that in September, 2020, he and Sarah were both attending a Tzedek (a Hebrew word meaning justice) Lab training (www.thetzedeklab.com) They knew each other from previous workshops and events associated with anti-racism, anti-semitism, and climate chaos. During a breakout group they began talking about the upcoming Nov. 3 U.S. election. Mordechai recalled that he and Sarah agreed that people would have a lot of feelings about the election, regardless of the results. Their conversation led to a plan to equip other facilitators to use the Work That Reconnects in mini, emergen(t)cy type workshops over three weeks after the election. “A spiral process is something the Work That Reconnects community had to offer as a major resource in the lead-up-to and wake of the election,” Sarah noted. They designed the script and training for the Post-Election Spiral Process over the next month, and offered it twice in October.

During the training, which was attended by several members of Deep Times Editorial Board, Sarah told us the idea for the mini-spiral was inspired by two streams of work: one is the Evolving Edge Anti-Oppression Resource Group, which sees our current time as providing opportunities to facilitate in such a way that explicitly connects the struggle of the people and the struggle of the Earth, bringing together anti-oppression principles and practices and the Work That Reconnects. Second was a gathering with Joanna Macy at Ghost Ranch in January 2017, during which concerns about Trump’s election were addressed. Mordechai attended this event with 50-60 others. From the start of their planning the mini-spiral, Sarah and Mordechai knew its core was going to be a process that Joanna Macy laid out at that retreat at Ghost Ranch in January 2017. Mordechai said that Joanna facilitated an exercise during which she introduced four questions to bring to the surface “what has prepared you for this time.” The questions are:

“…we will help people to name, grieve, perceive, and breathe these connections with the aim of returning participants more refreshed and grounded to be courageous in the face of oppression in their daily lives.”

Sarah and Mordechai thought the exercise and questions seemed perfect for helping people process the election. During their October workshop training, they told us that the goal of the mini-spiral was to offer “invitations to political ecology – a willingness to go right through the compression point of the election to illuminate how people are relating to each other in the living body of Earth.” They said that “as facilitators we will help people to name, grieve, perceive, and breathe these connections with the aim of returning participants more refreshed and grounded to be courageous in the face of oppression in their daily lives.” They supported Work That Reconnects facilitators who wanted to pair with a non-Work That Reconnects facilitator to offer a mini-spiral together. This was a way to cross-pollinate with facilitators skilled in other modalities, and introduce them to the Work That Reconnects. They encouraged facilitators to offer a mini-spiral in partnership with someone who was different in at least one structural way, such as a different generation, or from a different cultural or ethnic background, to model the generative possibilities that come from working together across differences.

An enchanting component of the training they offered was breathing together as a way of showing support and appreciation for offerings of participants in a group. Mordechai said he learned this from Rabbi Tamara Cohen who is also in Philadelphia. We were instructed to look at one other person in gallery view on Zoom while holding our hands with palms facing the screen. We were to open our hands and extend our fingers while breathing in, and close our hands gradually while exhaling. Our goal was to match the pace of the breathing of the person who was our focus for the practice. We did this for three breaths, enjoying the sense of communion with one another, seeing as more and more hands opened and closed simultaneously.

Mordechai gave Sarah credit for the bulk of the logistics, which provided a website where facilitators could sign up to offer the mini-spiral at a specific time, access to moderated Zoom space, ways for people who reached the general site to sign up for a specific session and then be connected with facilitators for that slot. He and Sarah indicated they had help with logistics and scheduling multiple meetings from Jo DelAmor, Jonathan Nahar for the ongoing technical assistance on the forms, and Lydia Harutoonian for the graphic design work.

A week after the final Recenter, Reground, Refresh post-election workshop was held, Sarah and Mordechai sent an email to facilitators of at least 16 groups (one in Spanish): “The aftermath of the election continues to unfold in various ways, but I have no doubt that the over 340 registrants and especially the approximately 210 participants are moving in the world with a sense of greater centeredness, groundedness, and feeling just a wee bit more fresh!” They remain grateful to all the facilitators who signed up, and community members who assisted behind the scenes in graphic design, registration design, and tech support.

The post-election workshops serve as examples of the capacity of the spiral to focus on and address the interwoven dynamics of historical injustice, climate disruption, and current dangers our country faces…

Though this experience ran November 4-25, Sarah has received a few notes since the Jan 6 post-election violence at the capitol related to the ongoing relevance of re-centering, re-grounding, refreshing, and most of all recommitting to action that reduces violence and oppression for the sake of people and the Earth. She and Mordechai encourage the facilitators’ network to use the Work That Reconnects process to respond to the escalating threats to democracy. The post-election workshops serve as examples of the capacity of the spiral to focus on and address the interwoven dynamics of historical injustice, climate disruption, and current dangers our country faces in fulfilling the potential of our democratic institutions.

As a co-facilitator of monthly Work That Reconnects workshops on the Zoom platform since August 2020, I have appreciated the smooth process we can offer because Valerie is adept with this technology. Each month she and I take time to review multiple resources, bounce ideas off each other about different ways to present each part of the Spiral, and select an opening musical selection and closing reading or song. Sarah and Mordechai and their team offered all these elements to facilitators and their partners in a beautifully choreographed package. They provided publicity for every November mini-spiral workshop through the Facilitators’ website. They established an online registration calendar so people interested in participating could view dozens of dates and times a mini-spiral was being offered, and register with their contact information getting emailed to the workshop presenters. The October training Sarah and Morechia offered reflected their extensive experience, skill, deep understanding of the Work That Reconnects, and their passion for helping facilitators and workshop participants use the cauldron of current events to ReCenter, ReGround, and ReFresh. We are grateful for their gifts. 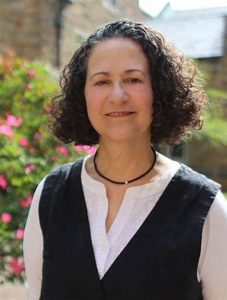 Rebecca Selove has worked as a clinical psychologist in community settings and private practice for several decades. Currently she is a public health researcher focused on cancer-related disparities. The foundation for her love of  Earth was established during her childhood on her family’s dairy farm in West Virginia. She was blessed to be surrounded by animals, flowers, clouds, creeks and mountains on a daily basis. She read her first Joanna Macy book in the mid-80’s and has been facilitating WTR-inspired workshops since the early 90’s. She lives and gardens on an organic farm in Tennessee.