Each morning after breakfast, through the glass doors
to the courtyard, we watch two robins fetching food
for their fledglings — the nest, the three open beaks
nearly invisible through glossy leaves and pink camellias.

One morning we see baby birds fluttering in the grass,
fallen from the nest before they’ve learned to fly.
Their parents flit from one to another, trying to feed them.
One dies, then the second, the third. We bury the bodies.

Within weeks we see the robins building a new nest.
The eggs hatch, and this time the fledglings fly –
the way lupines blued over mountain meadows
the spring after fire swept down hills into Tassajara,

the way I twice relearned to walk – in my twenties
after a bike accident fractured my pelvis,
and again, decades later, when a titanium
hip socket renewed my love of locomotion —

the way we meet our fear of invisible droplets
that can lead to death, and begin to venture out
after sheltering in place, hungry to touch
and be held, still not knowing what is safe. 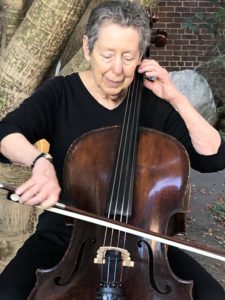 Tova Green is a resident priest at San Francisco Zen Center, where she teaches and co-leads Queer Dharma  and Unpacking Whiteness groups. She first participated in a workshop with Joanna Macy in 1982 in Boston, MA and led Despair and Empowerment workshops in Australia, Japan, the Netherlands, and the U.S. in the 80’s and 90’s. Tova’s essay “Power and Privilege in Indra’s Net” appears in A Wild Love for the World, Joanna Macy and the Work of Our Time, edited by Stephanie Kaza. She is a poet and cellist.