Welcome to the March 2022 issue of Deep Times! 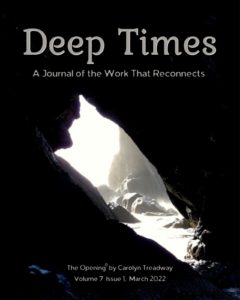 Our theme for this issue is Unraveling Patriarchy and Shifting the Paradigm.  Our call for submissions asked for articles, poems, and artwork to:

…examine patriarchy as one of the intersecting sub-systems of  the ‘power-over’ paradigm, which has deep and wide roots and branches in the idea of separation from the land and the superiority of humans. The philosophical and political movement away from knowing the world as animate and alive gave birth to other hierarchies and oppressions, including the accumulation of resources by a few, capitalism, colonialism, labor extraction, racism, heteronormativity, etc. Patriarchy’s exercise of power over all that was categorized as “feminine” necessitated “othering” of women and queer folk, along with other species, land, fruit, life, wildness, the heart, and intuition–in order to dominate or own them. Power-over works to divide one oppressed group from another for the same reason.

Throughout its long history, what are the structures/attitudes/values-belief systems that enable patriarchy to persist?  Can the Work That Reconnects help dismantle them, and if so, how?

The response has been heart-warming and we are grateful for all the submissions, both the ones we used and the ones we had to turn away or set aside for a future issue.

We’ve put together a rich array of articles, essays, poems and artwork that address the challenge of unraveling patriarchy and shifting the dominant paradigm to one of reverence and respect for all life, based on our radical interconnectedness with our fellow humans of all cultures, ancestry, and identities and with all beings of Earth.

Following the Spiral, the Gratitude section offers heart-opening poems by Ellen Bass and Karina Lutz, and a grateful remembrance by Silvia Di Blasio of three teachers who have recently become ancestors: Thich Nhat Hanh, bell hooks, and Desmond Tutu—who each worked in their own ways to shift the patriarchal paradigm.

The Honoring Our Pain for the World section offers poems by Marie Howe, bell hooks, and Jacqueline Sheridan that focus on the pain caused by patriarchy.  Juliana Mota Diniz explores the relationship between personal and collective trauma and the healing of both through embracing pain.  Jo Hamilton reports on her PhD research on how Work That Reconnects workshops helped participants embrace painful emotions related to the climate crisis and engage more fully in climate activism.  And Stephanie Hiller points out the relationships among patriarchy, war, and the Great Unraveling. This section ends with a painting by Jane Sherry titled “The Birthing Room” that reminds us that even the burned forests will regenerate with new life.

So many ways to See with New and Ancient Eyes beyond patriarchy!  Carolyn Treadway’s thematic photo journey through the Spiral begins this section, followed by Vincent Brown’s report on his doctoral study of the benefits men have received through doing the Work That Reconnects (which partially inspired the theme of this issue). Pegi Eyers explores matriarchal values and how we might shift from the patriarchal paradigm to that of an ecological self.  Two poems grace this section: “Palimpsest” by Emily Swanson and “Four Trees,” a poem by Anna Lyons-Roost in creative interplay with Rick Jansen and Frieda Nixdorf.  Paula Hendricks describes her understanding of Miki Kashtan’s work that so beautifully complements the Work That Reconnects in creating a world without patriarchy. Frieda Nixdorf’s art, “The Entelechy of Oak” concludes this section in beauty.

And we Go Forth to create a world beyond the constrictions and violence of patriarchy, inspired by poems from Julia Smagorinsky, Susan Griffin, and Looby Macnamara.  Paul Pulé and Abigail Sykes discuss their work with the Starfish Collective in “Transforming Destructive Masculinities Norms through the Work That Reconnects.”  Their paper is followed by the first podcast in a series of “Conversations in Deep Times,”  this one featuring Paul Pulé in conversation with Erin Holtz Braeckman on “Ecological Masculinities.”  This section ends with Leo Murray’s exploration of why so few men show up in movements, protests, and activist workshops in Aotearoa New Zealand and elsewhere.

In the Evolving Edge section, Brooke Kuhnhausen reviews the impact of bell hooks’ writing and teaching and reflects on how Black and Indigenous, female, queer and non-binary leadership is so vital in today’s world.  Martha O’Hehir echoes that sentiment in her book review of Sisters in Spirit: Haudenosaunee Influence on Early American Feminists by Sally Roesch Wagner, which recounts how early settler feminists learned about true equality among genders from their Haudenosaunee neighbors.

We have many Resources to share with you: on patriarchy, on the climate crisis, on Thich Nhat Hahn’s legacy, and “What We Editors Are Reading.” The Network section features the results of recent “Visioning” on the part of the Weavers of the Work That Reconnects Network.

For our next issue in September 2022, we plan to elicit contributions from all over the world to show how the Work That Reconnects is helping people grapple with the many crises before us all, adapted to local and regional needs and cultures.  We hope to offer articles and poems in the mother tongue of each contributor as well as translated into English.  We’ll be sending out a call for submissions very soon!

Eyes Wide Open to the Injustices, Challenges and the Possibilities – The Passing of Three Greats

Honoring Our Pain for the World

Disrupting Patriarchal Legacies of Dealing with Trauma and Pain

by Juliana Mota Diniz
Juliana explores the relationship between personal and collective trauma and the healing of both by embracing the pain.

by Jo Hamilton
A report on the author's PhD research on how Work That Reconnects workshops helped participants embrace painful emotions related to the climate crisis and engage more fully in climate activism.

And the Walls come Tumbling Down

Daughters of the patriarchy

Transforming Destructive Masculinities Norms through the Work That Reconnects

by Paul M. Pulé and Abigail Sykes
Paul and Abigail discuss how the Work That Reconnects helps shape the Starfish Collective's work to shift away from the overculture habits of Industrial Growth Society.

In this inaugural episode of our Deep Times podcast series, Erin Holtz Braeckman interviews Paul Pulé on men, masculinities, and their impacts on Earth, others and self.

Great As You Are

Male Representation in Transformational Spaces Within a Power-over Paradigm

by Leo Murray
Leo explores why so few men show up in movements, projects, protests, and learning environments in Aotearoa New Zealand and elsewhere.

bell hooks and a Liberating Eco-feminism

by Brooke Kuhnhausen
Reading bell hooks’ words again, I feel struck and expanded by the power of her vision.

book review by Martha O'Hehir
Sisters in Spirit by Sally Roesch Wagner describes how early feminists and suffragettes received their clear vision of what an egalitarian and cooperative society looks like from their neighbors, the Haudenosaunee.

Collected by Karina Lutz
Beloved Thầy (teacher) Thích Nhất Hạnh died Jan. 22, 2022, at the age of 95. Here are articles about his contributions as well as some of his teachings so relevant to the Work That Reconnects.

Collected Resources for Further Exploration on the Climate Crisis

Collected by Martha O'Hehir
Resources on the climate crisis gleaned from viewings of the film Once You Know and beyond.

What We Editors Are Reading

The Work That Reconnects Network Visions for 2022-23

Deep Times: A Journal of The Work That Reconnects

Deep Times is published online twice a year by the Work That Reconnects Network.