I went to Standing Rock over Thanksgiving week, 2016. I traveled in a caravan of RVs and cars from the East Bay in California. There were 24 of us ranging in age from under one year old to over 75. We were kids, parents, grandparents, and singles. We were Native, African, Latino, white and multi-racial Americans all drawn together in our desire to be of service to the Indigenous People’s movement to protect the water and stop DAPL (Dakota Access Pipeline)  at the Standing Rock Sioux Reservation in North Dakota. Most of us had never met before but we became an extended diverse family. I live in a very white corner of the world and being thrown into this multi-cultural caravan of fellow activists, Kwan Yin devotees, ritual leaders, educators, permaculturalists, and artists was like taking a long drink of water after crossing a desert. I had wanted to do something practical and concrete for the planet as a response to the national elections and little did I know how life changing Standing Rock would be.

The call had gone out from Standing Rock for people to come be witnesses and to bring winter supplies. Over 6,000 people were at Oceti Sakowin camp that week and thousands more would arrive after we left. Our caravan team raised mon 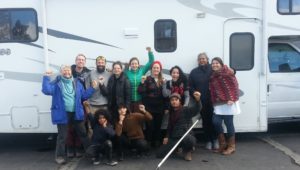 ey and gathered supplies to help people at the camp get through the winter; winter tents, 0 degree sleeping bags, heaters, wood stoves, and warm clothes. It is pretty amazing what you can cram into an RV. While we were there those of us who were not participating in front line actions set up tents, assembled wood stoves, and helped in the Medic Healer area. I was so glad to have something solid to contribute
and to be in the role of a support person for the Indigenous community who were leading this heroic effort to stop the pipeline and protect the water for us all.

Among the many things I learned at Standing Rock is that Thanksgiving is not a popular holiday for the indigenous people of Turtle Island. I have ancestors who arrived on this continent before the Mayflower and I have been taught to be proud of my White Anglo Saxon Protestant forebears for being early settlers, businessmen, teachers, doctors, and founders of a new country based on “freedom and justice for all.” No mention was ever made of the the Wampanoag Indians who lived on the land that is now Massachusetts or the other tribes who were killed and pushed off their land by early European settlers. The United American Indians of New England began observing a “National Day of Mourning” on Thanksgiving in 1970, calling attention to the history of genocide against indigenous people that included massacres, broken treaties, and the forced assimilation of children through boarding schools that persisted into the 1970s. This wound needs to be healed.

It is hard to hold in my heart the truth that my people were part of the genocide upon which this country is based. But that is my work to do, to face and peel away the layers of  a colonized mindset, white privilege and white supremacy which is the water I have been swimming in most of my life. Standing Rock was the perfect place to be. Those of us who have studied with Joanna Macy know the Shambhala Prophecy, but there is also the Rainbow Prophecy of the people of Turtle Island. “There will come a day when people of all races, colors, and creeds will put aside their differences. They will come together in love, joining han 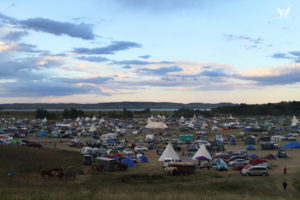 ds in unification, to heal the Earth and all Her children. They will move over the Earth like a great Whirling Rainbow, bringing peace, understanding and healing everywhere they go.” The whirling rainbow of people were at Standing Rock. It was messy sometimes, but the prayer, the love, and the ceremony held it together.

On Thanksgiving Day, some of the young people from our group participated in an action blocking an intersection in the town of Mandan, North Dakota. One of my fellow travelers, a 19-year-old Latina poet, artist, and performer, participated in the action and told me gleefully that they recreated a Thanksgiving table with a bloody pig’s head and decapitated pilgrims. “ Well, “ I said, “ those pilgrims were my people.” After a slight pause we both smiled. We had just spent the past four days together in a small RV and had come to love each other even though we were from very different worlds. It was a beautiful moment in a week full of beautiful moments.

“Good Morning, campers! You are not on vacation. Time to get up for prayers and then it’s time to work.” Each morning over a scratchy megaphone, one of the Elders would drive around camp waking people up. Standing Rock was truly a living prayer and the whole action was held as a ceremony on sacred ground. The Friday morning after “Thanksgiving,” I headed up to the sacred fire circle for prayers. There were so many people around the fire that I was in the fourth or fifth large ring of people two-stepping around the fire to Lakota chants sung by community elders. I couldn’t see what was happening in the center of the circles of hundreds of bundled up Water Protectors in the half light of a cold morning. But when I looked up in the sky above the center of the circle, I had a vision of Water Goddesses from around the world pouring water down into the center of the circle. Kwan Yin was there, African, Celtic, and South American goddesses as well as a North American goddess. I don’t know their names, but this is what I saw.

Once the singing and dancing was done and people began to disperse, I headed to the center of 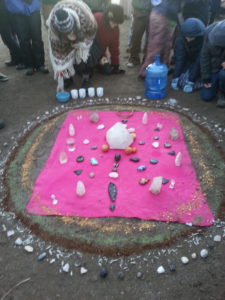 the circle to see what was there. A beautiful altar was set up on a bright pink cloth and three indigenous women elders had just finished a Water Ceremony and were passing out bowls of sacred water to sip. Normally we were not allowed to photograph ceremonies, but they told those of us admiring the altar that we could take pictures of it.  It was spectacular with a huge rose quartz crystal standing amid many stones and other sacred objects.

It seemed to me that they had performed a very powerful ceremony as it called in all those water goddesses from around the world to pour their blessings into this place. There is so much we do not know and so many levels upon which prayer works. The Elders at Standing Rock kept reminding us that the power of the actions came from prayer, that people were coming to Standing Rock because it was prayerful and peaceful and reminding us that we were praying for the water, ourselves, the land and the people on the other side of the barricades. We are all relations, Mitakuye Oyasin in Lakota.

The instructions to the people on the frontline actions from the elders were, “Brothers and sisters, don’t engage the police! Don’t be reactive. When you are reactive, you step out of prayer and go into anger. Have love in your heart. Don’t let them incite you. Pray here and do what we came here to do.”  This is the way forward for all our actions and protests in the years ahead. We can no longer afford to function from the old mindset of separation, for that just gives more power to the old paradigm. We must create Standing Rocks everywhere.

It was such a honor to be at Standing Rock and I am heart-broken that the pipeline has now been built under the Missouri River. However, the sacred reverberations that were sent out from there are inspiring others across the country and the world. The Shamballa and Rainbow Warriors for peace and a living planet are indeed rising up everywhere. If we can keep love in our hearts and call in the Goddesses when necessary we might have a chance to create the more beautiful world we know is possible.

Constance Washburn M.A., activist, educator, and facilitator with over 35 years experience, has been training with Joanna Macy since 1994. She has been a Buddhist practitioner since 1968 and brings her nature connection, mindfulness training, theater and education backgrounds together to create opportunities for people to reawaken to their interconnectedness. She currently leads retreats for elder activists in the Work That Connects with Molly Brown through the Conscious Elders Network at www.consciouselders.org. www.constancewashburn.com.