The book had been inching into position #1 on my reading list for a while, when a few months ago I was finally able to read Braiding Sweetgrass: Indigenous Wisdom, Scientific Knowledge, and the Teachings of Plants by Robin Wall Kimmerer. Wow, what an extraordinary gift!  Self-described by the author as a “a braid of stories meant to heal our relationship with the world” and as “old stories and new ones that can be medicine for our broken relationship with earth, a pharmacopoeia of healing stories that allow us to imagine a different relationship, in which people and land are good medicine for each other”—the book is just that.

Kimmerer has such beautiful lessons for the reader—humility, wonder, gratitude, reciprocity, awe. Those are just plain words without the stories to accompany them. But rather than recounting some of Kimmerer’s stories, I wish to share part of my own story. 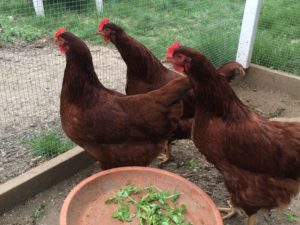 While reading Braiding Sweetgrass, I found myself newly in relationship with five backyard chickens. The chickens have been a powerful doorway into reciprocal relationship for me, a pathway back to starting the day with gratitude, a daily call to presence. I have long admired practices such as the Haudenosaunee Protocol or Thanksgiving Address as an example of how a people can orient towards gratitude, the power for what comes after if we begin with humility, reverence and appreciation. So I am grateful for the impact the chickens have had on my life, as my own gratitude practice. This has been my experience:

We had brought them to live behind our suburban house in a home of their own—commonly referred to as a coop—in August. We were not able to be home during the day to take care of chicks, so we got five-week old birds who were old enough to go straight into the coop. Never having had pets in my life, or any long-term relationship with animals other than humans, I can remember the excitement on the day we brought them home. Many months of preparation had gone into their arrival —first navigating town bureaucracy to get the regulations on the keeping of chickens changed; speaking with all of our neighbors about any concerns they may have; submitting a permit application; undergoing a public hearing with the board of health; building the chicken coop with mostly reclaimed materials; painting it with love; studying up on how to care for chickens.

The friendly man who sold us the chickens—three Rhode Island Reds and two Easter-eggers (so named because they lay pastel pink, blue or green eggs)—promised us that we would get our first egg on Christmas morning. I don’t know how he could know that with any precision, so I guess he must have been joking. It’s a good thing he was wrong, because we were out of town on Christmas day (with friends looking after the girls for us while we were gone), and how disappointing it would have been to not be there for the arrival of their first egg. As luck would have it, we were home two days after Christmas, and voila!— the first egg. It was total magic: on that day and every day since,I have not ceased to marvel at the miracle of an egg.

I have not ceased to marvel at the miracle of an egg.

It used be that I would hit snooze on the alarm several times before dragging myself out of bed in the morning, but once the chickens started laying eggs, I began waking up before the alarm went off, thinking about the chickens and eager to jump out of bed to see if there are any more eggs.

It’s funny though. With all this admiration of the miracle of the egg—one that comes from a bird that I am in relationship with rather than from the grocery store with which I have no connection—I wasn’t able to eat any of the first eggs. There is complexity in the reasons for this, and while discussing my reasons with a friend, she helpfully suggested that I simply ask the birds permission to eat their eggs. I was floored with that idea. Why hadn’t I thought to do that myself? Maybe because I grew up in a culture that treats animals as objects rather than as subjects.

So, I soon found myself out in the yard with the chickens, delivering a bowl of salad trimmings—now whenever I made salad I make salad for two: salad for humans and salad for chickens. The chickens get all of the carrot tops and cucumber peels and lettuce stems; lettuce is one of their favorite treats. I emptied the food into their dish and as they tore into it with fervor, I thought, perhaps I’ll catch them by the eye one by one, and we can have some silent unspoken communication whereby I could ask if it was OK for me to eat their eggs. After all, I didn’t know chicken language, and they certainly didn’t speak English.

I silently promised to them that I would feed them well and keep them safe to the best of my ability, and silently asked if I could eat some of their eggs. I did manage to look one and then another of them momentarily in the eye, but the omen that sealed it for me is that as I crouched down nearby, a speck of lettuce flew back up from the feeding frenzy and landed in the now empty bowl in my hands that I had just brought them food in moments earlier. “Yes Aravinda, in this relationship, you can eat too.” Message received. I was able to happily eat the eggs after that.

My deepening relationship with the chickens has been my own education in reciprocity, and I take great care with feeding them well

My deepening relationship with the chickens has been my own education in reciprocity, and I take great care with feeding them well– all of the best kitchen scraps are now diverted from the compost directly to the chicken bowl, and every egg is still a miracle.

The chickens have had many lessons for me. Another one is patience. A few weeks ago, we managed to give away nearly two dozen eggs in a single week, which meant that we had to wait a few hours on Sunday morning before we could make French Toast. The gift was again ours, as we hung on in the yard and practiced adjusting from grocery store time to chicken time.

Tending to the chickens in the morning has become a morning ritual for me now. I wake up, get out of bed, go downstairs and put my shoes on. As I open the door to the back yard, my body greets the day, the day greets my body. In winter months the cold air meeting my face brought my body and mind alert, reminding me that I was alive. Now in spring months, the bird song that greets my ears reminds me that the rest of the world is alive, too. Each morning, I let the chickens out of the coop where they have been safely enclosed from any night predators, and check the water and food levels in the feeder. Most mornings I bring a treat in my silver chicken food bowl—either salad trimmings or some other food scraps that humans were not going to eat. And then I just hang out with the girls for a few minutes before I start in with the rest of my day.

How about you? Do you have a ritual for greeting the living world each new day? If the answer is no, as it was for me for many years, chickens may or may not be a doorway for you. What other doorways are available to you? Perhaps a tree you pass each morning as you walk to catch the bus? Looking at the color of the sky? Greeting the food plants in your morning breakfast?

In closing, I wish to thank the chickens who have become my friends and my teachers for this doorway back into reciprocity, back into wonder, back into gratitude. May we all have abundant doorways. 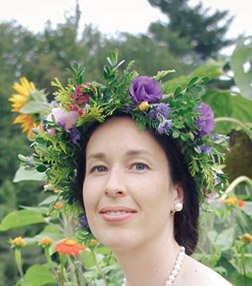 Aravinda Ananda is a member of the Interhelp Council, helped start a Greater Boston Work That Reconnects community of practice, and has been a part of many co-facilitation teams including the Earth Leadership Cohort, an immersion in the Work for young adults, and the Community Leadership Cohort, an exploration of communities of practice. Her primary life’s work is helping to transform human-Earth relationships to be mutually enhancing; she is currently finishing a book called Living rEvolution. She seeks to live the rEvolution daily and support others on this path.

One thought on “Coming Back to Reciprocity”