Randy, you inflate and deflate
Like a mad balloon man
Desperate to bring a smile to a child’s fate.

Such desperation in all you do,
Such desire to cut to the marrow.
To tap the molten fire,
That runs beneath the straight and narrow.

Yet you also seek domestic tranquility,
A home where kettles sing and light jazz rings,
Background music to humanity’s destruction.
Where a cat’s barfing on a favorite rug,
Elicits the same consternation as news of slaughter
And the fracking fuck!

Living two lives can be like living two lies.
Is it deceit to watch a silly movie as Western fires burn?
Is it betrayal to wish for normalcy
When plowing the fields of terror and non-being?

When you speak of one world in the other world,
What do you expect?
To be considered normal?  For others to think you’re a nice guy?
To be liked, despite the images you speak,
That make people freak?

No, to become a master of two worlds, expect rage!
Expect to be vilified, to be crucified.
Do you think Jesus was concerned about self-image
Or how he was to die?

He was devoted to something else,
The same fire that glows within the Self.
He blazed a path of devotion you have yet to learn,
Eschewing fanaticism that says, “Let it burn!”

So get it together!  Buck up!  Sit straight!
There’ll be no whining about this tragic state.
Colliding worlds is humanity’s fate,

Get used to your role, because I am told,
In that fierce embrace,
Awaits the promise,
Of many-colored bags of gold.

Canyon of the Ancients, CO

This poem was written near the end of a week-long retreat on ‘Grief and Longing’ that took place in the Canyon of the Ancients in Colorado in 2012.  Before that, I had spent ten days at a Buddhist Retreat Center in solitude and silence.  I was feeling a great desire to live a life of deeper devotion.  Yet I was being tormented by the tension among competing desires — of wanting to forget all of the troubles of the world and bask in the love of family and daily joys, of heading heroically into the storms that are destroying our planet in order to mend the world, or to retreat into the silence, beauty and terror of inner worlds.  How could I be an activist, a family man and a contemplative at the same time?  This poem emerged from the Canyon of the Ancients to answer my cry.  The ‘many-colored bags of gold’ is an image from a dream incubation in which I prayed for a resolution to the mandorla of opposites that plagues any modern person who seeks a path of devotion in a time of ‘colliding worlds’. ~ Randy Morris 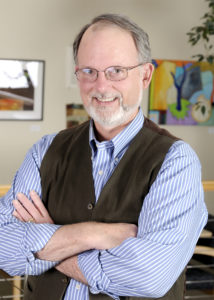 Randy Morris, Ph.D., is Professor Emeritus at Antioch University Seattle where he supervised the Spiritual Studies and Psychology programs in Liberal Studies.  Prior to that, he taught kids in Atlanta and Hiroshima, Japan for ten years. He continues to teach adjunct classes in depth psychology, dreamwork, mythology, ecospirituality, and ritual process.  His life-long interest is in personal and cultural initiation in preparation for the Great Turning.  He is President Emeritus for the non-profit Rite of Passage Journeys, where he served as a vision quest guide for many years.  He is an avid kayaker and music-maker and loves to sit by the waters and daydream.