The editors of  Deep Times Journal grieve the plight of the world’s refugees and are grateful to Warsan Shire for this expression of the desperation and valor motivating our brothers and sisters to seek asylum and to create a new and livable home for themselves and their children.  We are called to this, another guardianship like nuclear guardianship, for the outcomes of the USA’s misplaced predatory policies, gun sales, corporate corruption, and its responsibility for making the lands of people everywhere anything less than homes of the free. 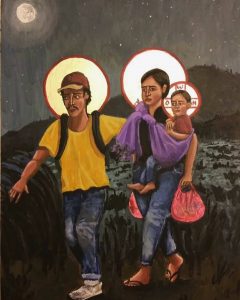 no one leaves home unless
home is the mouth of a shark.

you only run for the border
when you see the whole city
running as well.

your neighbours running faster
than you, the boy you went to school with
who kissed you dizzy behind
the old tin factory is
holding a gun bigger than his body,
you only leave home
when home won’t let you stay.

no one would leave home unless home
chased you, fire under feet,
hot blood in your belly.

it’s not something you ever thought about
doing, and so when you did –
you carried the anthem under your breath,
waiting until the airport toilet
to tear up the passport and swallow,
each mouthful of paper making it clear that
you would not be going back.

you have to understand,
no one puts their children in a boat
unless the water is safer than the land.

who would choose to spend days
and nights in the stomach of a truck
unless the miles travelled
meant something more than journey.

no one would choose to crawl under fences,
be beaten until your shadow leaves you,
raped, then drowned, forced to the bottom of
the boat because you are darker, be sold,
starved, shot at the border like a sick animal,
be pitied, lose your name, lose your family,
make a refugee camp a home for a year or two or ten,
stripped and searched, find prison everywhere
and if you survive and you are greeted on the other side
with go home blacks, refugees
dirty immigrants, asylum seekers
sucking our country dry of milk,
dark, with their hands out
smell strange, savage –
look what they’ve done to their own countries,
what will they do to ours?

the dirty looks in the street
softer than a limb torn off,
the indignity of everyday life
more tender than fourteen men who
look like your father, between
your legs, insults easier to swallow
than rubble, than your child’s body
in pieces – for now, forget about pride
your survival is more important.

i want to go home, but home is the mouth of a shark
home is the barrel of the gun
and no one would leave home
unless home chased you to the shore
unless home tells you to
leave what you could not behind,
even if it was human.

no one leaves home until home
is a damp voice in your ear saying
leave, run now, i don’t know what
i’ve become.

but i know that anywhere
is safer than here.

Warsan Shire is a 24 year old Kenyan-born Somali poet, writer and educator based in London. Born in 1988, Warsan has read her work extensively all over Britain and internationally – including recent readings in South Africa, Italy, Germany, Canada, North America and Kenya- and her début book, ‘TEACHING MY MOTHER HOW TO GIVE BIRTH’ (flipped eye), was published in 2011. Her poems have been published in Wasafiri, Magma and Poetry Review and in the anthology ‘The Salt Book of Younger Poets’ (Salt, 2011). She is the current poetry editor at SPOOK magazine. In 2012 she represented Somalia at the Poetry Parnassus, the festival of the world poets at the Southbank, London. She is a Complete Works II poet. Her poetry has been translated into Italian, Spanish and Portuguese. Warsan is also the unanimous winner of the 2013 Inaugural Brunel University African Poetry Prize.