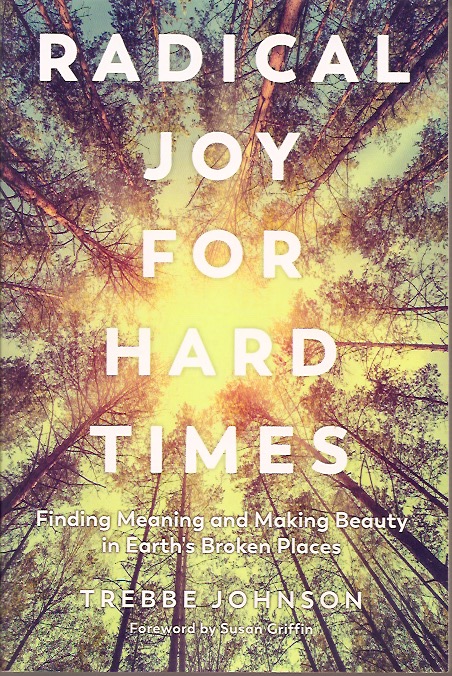 Trebbe Johnson is the founder and director of the global community Radical Joy for Hard Times, which is devoted to finding and making beauty in wounded places. In 2018,  Radical Joy for Hard Times invited the Work That Reconnects Network to be one of their partner organizations whose work inspires and complements theirs. Trebbe’s 2018 book (by the same name) offers wisdom and insight for people involved in the Work That Reconnects, especially regarding how we hold and express our grief and love for our world.

Below are two excerpts from chapter 4 entitled ““Befriending the Gaze.”

Gazing is a very particular kind of looking. It is open and receptive. It lingers. It demands nothing, either from the subject who gazes or the object gazed at. It’s a form of seeing that allows us to become implicated in what we see…(p. 69)

At Peace with the Unfixable

When I can really look at something without wanting anything from it, without even wanting anything about it to change, then the essences of both me, the gazer, and the thing gazed at shift, clarify, loosen. Buddhists call the practice of inner looking “sustaining the gaze.”

Look at your despair, Macy teaches: about nuclear waste, global warming, the extinction of species, the rape of women in war.

Joanna Macy has broadened the meaning of the term “sustaining the gaze” to include bringing attention to disturbing aspects of the outer world, as well those that float up in meditation. Look at your despair, Macy teaches: about nuclear waste, global warming, the extinction of species, the rape of women in war. “We have to look at things as they are,” she writes, “painful and overwhelming as that may be, for no healing can begin until we are fully present to our world, until we learn to sustain the gaze” (Macy, 1991).   Another Buddhist, Dan Leighton, points out that this practice of looking diligently also has echoes in Thomas Jefferson’s imperative that we, as citizens of a democracy, must maintain “eternal vigilance” as insurance that neither corrupt governments nor dissent from within may destroy the brilliant experiment of democracy (Leighton, 2004). Practicing attention hence becomes a sacred task. I undertake it not because it is going to benefit me personally (although it might); not because it will do some good to a person, place, or cause outside myself (although it might); but because it rivets me to the world that gave rise to me and of which I am a vital part. I do it out of love.

Sustaining the gaze, one looks without trying to fix. That’s hard, maybe especially hard for an American, since our cultural mythos is grounded in our can-do attitude, our conviction that “if you put your mind to it, you can accomplish anything.” Aren’t you supposed to repair what’s broken? Or, failing to repair, shouldn’t you get right back up on the horse that threw you and gallop back into the fray? Again, a relevant analogy is that of sitting by the bedside of a friend who is ill. Stephen Levine, who works with dying people and their loved ones, advises hospice care workers that when they are in the presence of someone who is close to death, they don’t have to worry about doing things like comforting, consoling, querying. “All you have to do,” says Levine, “is get out of the way so that the appropriate response to the moment can manifest itself” (Levine & Levine, 1982). Sometimes the appropriate response is simply sitting quietly and holding the other’s hand.

When I go to a wounded place, then, I am doing the equivalent of sitting by my friend in her time of need and allowing time and attention to unfold between the two of us. I go to discover what’s present. I do this even if I know the answer, or think I do. I go because I already have an emotional attachment to this place, and some part of me knows that, even here, even now, I can’t just abandon what I love. I go because love is willing to gaze. And I go because it occurs to me that, if I don’t confront this thing that, up till now, I have regarded with hatred, fear, anger, and guilt, then I am hiding something very important from myself.

Allowing myself to be disarranged by a thing, a shift precipitated by the willingness to gaze, may be the first step to falling in love with it.

Let me tell you, there is a promise here. Theodore Roethke, a poet who advocated facing the unfaceable, wrote: “In a dark time the eye begins to see” (Roethke, 1961). You could also say: The willingness to see is the match that lights up the darkness. Allowing myself to be disarranged by a thing, a shift precipitated by the willingness to gaze, may be the first step to falling in love with it.

Sustaining the gaze does not mean accepting my fate. Just the contrary: it means accepting the present state of things, and through that acceptance rebelling against my imprisonment by the forces that have brought that present reality into being. (pp. 79-81)