Numb: A feeling that takes over as a protective mechanism when shock sets in following a traumatic event.

Numb is a sensation that has recurred along my journey through life. From war torn Cyprus in 1974. Hiding beneath the stairs as bombs dropped overhead from Turkish planes.   Atrocities in quaint blue and white churches. The long march to the British air base on the Island. A snaking line of families, carrying what they could. Clutching  important belongings, as the tiny Ghurkha soldiers march the other way, long curved knives in hand. Goodbye Mr Tabs,  our beautiful tabby cat. Please find your way to safety.

Inner city Birmingham. Bussed from RAF Brize Norton. The English refugees from invaded Cyprus arriving in the bus station underneath the Bullring centre. I’d never seen so many people. I clutched my mother’s hand for fear of being swallowed up by the crowd.

A year later, dad arrived. A Greek Cypriot national, he had made his own way, to meet us. A whole year later. I was so happy I jumped on him as he walked through the door of our council flat in inner city Birmingham.

I was not like the other children in my inner city infant school.  I was not full of chatter and fun. I was subdued, watchful. I hadn’t spoken for two years and school psychiatrists were engaged.

The school sent our class on a visit to the countryside. From the massive sprawl of concrete and vile air, to the green fields of the shire counties that surround the metropolis.  Us inner-city kids hadn’t seen a cow, and trees and all this green. When it came time to go, we filled our pockets with leaves that had fallen. Memento mori.

My sister and I had both done well at school, but we’d been plagued with stomach pains,  which had later been diagnosed as Crohn’s disease.  My sister died from complications in the gut as secondary to the effects of Crohn’s only last year. Dad developed stomach cancer and passed when I was eleven – Numb.

Only me and Mum now. I’ve been pensioned off work due to the constant surgery and illness from the disease. I sold the house that Mum and I shared to pay for Mum’s care home. Alzheimer’s means Mum can no longer remember the real world – Numb.

I took the money I’d saved from my work severance package and headed for the countryside, just like I had done as a child, so many years earlier.

I set up a rural retreat for urban dwellers here in the West Wales countryside. It is a beautiful place,  with a Community Woodland Garden and Orchard. The people who visit and become “Friends of the Wood” have their own plot in the garden and can take away what they grow. Those who have been prevented from coming due to lockdown this year have followed on Facebook as we develop and grow the site. A haven is waiting for those who need respite from the chaos of millions of scared people packed into urbanized concrete and glass.

Some who have come from nearby towns, especially this year, are numb. From the madness of the pandemic, of loss of family members. Unsure of the future of work, of an increasingly strange and unknown landscape of masks and fear.

But here, in the honeysuckle glade that is set aside for raised beds for organic growing, the tension of the world outside does not penetrate.  Time moves differently here.  The Green whispers through the trees of how to cast off the anxiety caused by events beyond our control. I hear the echoes down the years, of the children rushing to pick up leaves from paradise, before being bussed back to the city and I know the Green has entangled these visitors from the urban metropolis in his spell.

As we garden, we watch the wild birds and chat among ourselves. I see the tension melt away from their faces. Amidst the chaos of this diseased, recession-ridden world, there is a sense to make. This is the sense of a self-sustaining, rural existence. This is what is best for all of the people, and not just a few. This is what is best for society, and for our home – mother earth. 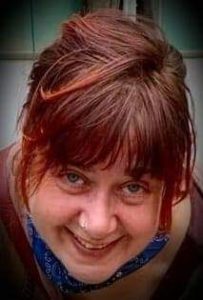 Anna Charalambous-Green is the Woodland Manager at West Wales Woods where her role is actively ensuring that those in the local community who have the need of “food banks” have the option of and the support to grow their own food in the Community Woodland Garden that she runs passionately.
As a qualified teacher of music, Anna also leads on several musical therapy projects in the local community. She writes prose and poetry in both English and Welsh, and has two delightful doggy companions who accompany her on her journeys through the Welsh wilds.