Songspirals: Sharing Women’s Wisdom of Country Through Songlines
by Gay’Wu Group of Women 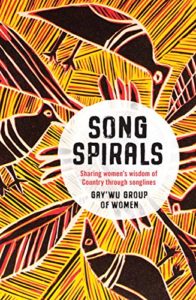 Songspirals is a book worth getting to know. An offering from Yolngu First Nations Elders, from Arnhem land in Northern Australia, it is a poetic, practical and reflective account of the practice of keening milkarri, or songspirals. Through the written telling of the song stories, or spirals, these women describe how they are awake to Country – to self-as-Country and to how the singing of songs are embedded in Country, allowing for a deep and regenerating relationality. The practice of singing the songspirals creates, heals, and re-creates Country, and therefore the singers. It’s not exactly a toolkit to teach the uninitiated how to “sing up” Country; rather, the authors are inviting readers to come into a deep listening relationship with Country, to let Country and listener reveal themselves together.

Songspirals offers a glimpse of the Yolngu women’s profound, beloved, and otherwise closely-held knowledge system. The narrative weaves through five of among the thousands of Yolngu women’s song spirals that are sung with, and for, Country. The authors are five senior Yolngu women and 3 Ngäpaki (white) academic women who together describe themselves as the Gay’wumirr Miyalk Mala collective of women.

This lyrical and didactic work won the Australian Prime Minister’s literary award in 2020 in the non-fiction category (sharing the prize with Sea People: The Puzzle of Polynesia, by Christina Thompson). The Judges described the work as “a major contribution to our understanding of contemporary Indigenous culture” and “a model for future collaborative projects” between Indigenous and non-Indigenous peoples. It’s much more than that, given its invitation for the reader to come into their own personal intimacy with Country, through listening and allowing the ungraspable Songspirals to work deeply in them. This account thus invites a personal bridging of the gap – one that otherwise acclaimed western writers like Bruce Chatwin (The Songlines, 1987) elided between ancient and modern understandings of how all of life sings life’s self into existence.

The Gay’wu women write in a collaborative voice – almost entirely grounded in Yolngu culture – developed through more than fifteen years of friendship and shared learning.  Earlier collaborations include Weaving Lives Together at Bawaka, North East Arnhem Land (2008), and, for a younger audience, Welcome to My Country (2013). The bonds and the trust between the women and their families weave the work together; hence the Gay’wu (woven dilly bag) metaphor to describe themselves.

What are songspirals? The authors offer a range of explanations throughout the book, and the reader’s understanding deepens as they engage with the songspiral stories themselves. You might say that the songspirals also (re-)create self and Country through story; as the authors write, “when we sing of that water, we remake that water, and we remake ourselves and our connections with water and all else that is Country” (p.16).

To further demonstrate this, the book begins with an ending and the telling of Wuymirri, the first of five SongSpirals: 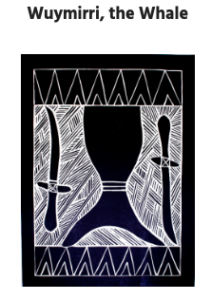 “Our mother, Gaymala, became Wuymirri, the Whale, as she lay in hospital”.

As she prepares for her death, the Elder Yolngu woman Gaymala sings, in the deepest level of her language, of herself as the whale:

She is singing here of what she is sensing and being as Whale (p.37), as the salt water carries her deeper, closer to her death. This is sacred business, and there is no messing around. The songspirals seem both mythical and phenomenal: Gaymala directs her own death journey, and the natural world responds:

“She breathes, sprays air and water, and it forms a cloud. The hunters…know the signs [from Country].  They spear the whale, and share her, and celebrate…” (p.53).

The songs and Country create each other in a continuing, reciprocal, spiralling movement.

Their broader project is to share profound cultural teaching and instill respect.

The women’s rationale for sharing is wide-ranging, beginning with the wish to speak for themselves (p.x). They note that “…books written about songlines have been written by..mainly white men” (p.xxv), and so want to put things right that are dhawadatj – mixed up, out of order (p.239). Their broader project is to share profound cultural teaching and instill respect. For the attentive reader, the process is both redemptive and transformative. Perhaps most urgently, the Elders want to help protect Country from the continuing destruction and extractivism of mining.

In light of continuing threats to sacred places, it is worth considering Western law’s poor history of acknowledging concepts outside itself. The Gay’Wu women’s Songspirals  translates an oral and aural cultural practice into a two-dimensional text accompanied by audio, photos, and art. It makes very clear to governing authorities (whose currency is black letter English) that the women do not consent to the continued violation of culture and place:

“We want to tell the truth to the greedy people about climate change, …building, never replanting, …killing” (p.111).

How then, can our sleeping ears hear in these ancient ways?

The authors note that these ancient keening practices offer profound healing, teaching and wisdom for those who have forgotten how to listen. How then, can our sleeping ears hear in these ancient ways? The women say that keening milkarri expands the perception of the singer, and takes them into other dimensions (p.30). Scientists at the frontiers of human neuroscience have tracked how shamanic practice can induce altered states of consciousness. In keening milkarri the Yolngu women enter into a profound, reciprocal and multi-dimensional relationship with Country. They are not asking readers to learn Yolngu matha (language) and sing milkarri – though the Western academic authors have done so, in the process of being adopted into Yolngu families. More than anything else, the admonition is “to stop and think what we are doing and try to listen” (p.154): “The spirit will tell us, the land will tell us. Everyone has their own pathway” (p.154).

A deeper teaching of the songspirals is revealed in a beautiful turning at the end of the book, where “we spiral back to where we started” (p.260).  After travelling through the spirals, we return to the story of Wuymirri, the whale, as told through the eye of the hunter, of Gaymala’s own clan (whom we met as Wurrumila in chapter 4).  The pain of her passing is felt in their crying, and they are the whale with her, swimming. The expert hunters work hard to catch the whale, who is the dying Gaymala, reaching “her final destination” (p.262). She, finally, offers herself – body, mind, and song – for the survival of the clan, and for the continuing unfolding of creation:


You might even find that the stories of your Country start to sing to you, too.

The authors of this deeply personal and revelatory book ask Ngäpaki who write about songspirals to write with emotion and depth, not in an abstract, disconnected, extractive way (p.94, p.104). In short, this is not a book that can be understood through skim-reading; you might need some time listening with Country – wherever you are local – some tissues, and a journal to allow these Yolngu songspirals to work their medicine in you.  You might even find that the stories of your Country start to sing to you, too. 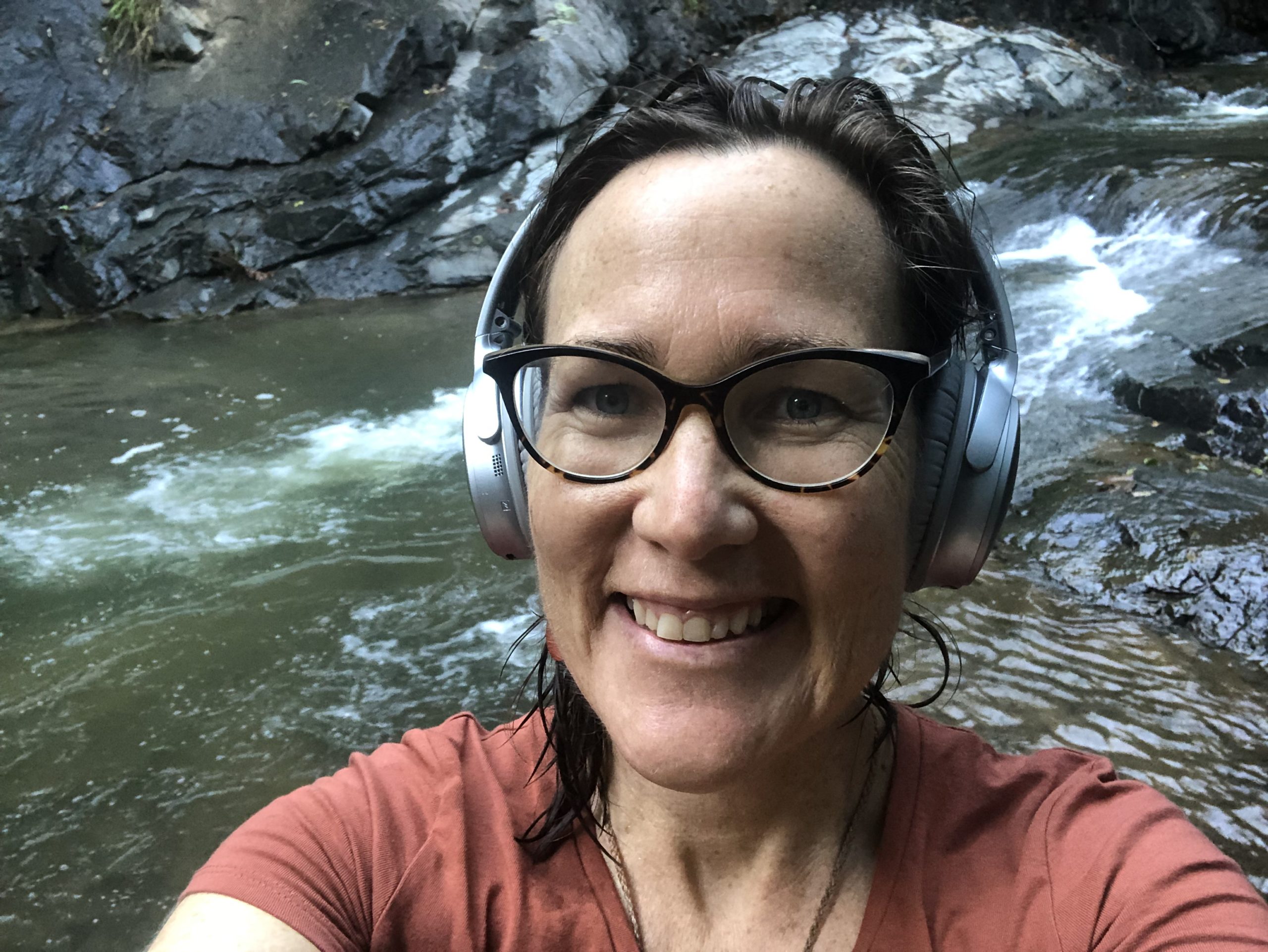 Ria Jago is a nature listener, sonic essayist, and amateur musician, living between Bundjalung and Yagera Country on the East Coast of Australia. She listens and creates with Country (as place and process) through bare and amplified sensing methods. She acknowledges her Indigenous, Zen, and More-Than-Human teachers. Ria is a former community lawyer, policy writer, and community radio producer.([email protected])