I began the Work That Reconnects with a group of people from all over the world in July 2021. I was living in Portugal at the time, up in the mountains near the Northern border with Galicia. There was a woman from Canada, one from New Zealand, one from Germany, one from Scotland and one from England. It was a good group to work with. Three of us still meet on Thursdays each week. We’ve become a kind of coven – two witches and a wizard, meeting at the cauldron, bringing exotic ingredients from our internal and external lives to stir into the pot, then watching and listening for whatever message the potion has for us.

what we speak, we believe, is being heard by a host of sacred beings, which is what a shrine is for–to provide a habitation for the sacred, for the unseen.

We meet at a metaphorical shrine; one that stands in the ethers of the imaginary realm. One that has developed over time; been added to each time we meet, by bringing our tokens of life experience, our feathers from the winged ones and our bones from the four legged ones, as offerings to the old gods and goddesses. Because we aren’t sharing our life experiences with just each other in mind; what we speak, we believe, is being heard by a host of sacred beings, which is what a shrine is for–to provide a habitation for the sacred, for the unseen.

Each morning, as part of a practice that arose during our meetings, I ask that same host: “How can I best serve the whole?” I offer grains to the land, which mostly gets accepted by the birds, who take it to the air, and when it has passed through their bodies, it will be dried in the sun and then washed by the rain. The sense that this is how all four elements receive the offering brings me joy, and a reminder that we do nothing alone in this life.

The recitation of “The Deer’s Cry” –an ancient Celtic prayer that I came across in John O’Donohue’s book, Anam Cara–also helps with this reminder:

Today I arise
Through the strength of Heaven,
Light of Sun
Radiance of Moon
Splendour of Fire
Speed of Lightning
Swiftness of Wind
Depth of Sea
Stability of Earth
Firmness of Rock.

(This prayer is ascribed to St Patrick–also known as St. Patrick’s Breastplate–although its origins are unknown. It was translated in 1920 by Kuno Meyer)

It’s quite a simple prayer, but it reminds me that I only can arise in relation to all these beings. The reminder helps to soften the edges of the belief in separation; to blur the harsh outline of boundary and border between one being and another.

Grief helps do this too. And for over two years I have grieved nearly every day. It just comes, especially when my belly is soft–because that’s where the well resides. When I bring attention there, and relax the previously unconscious tension in the muscles, something stirs; something tender and raw; something young and very old at the same time; as though ancestral tears were being wept through the eyes of a child.

When tears came up while talking with a friend a couple of months ago, I talked about how it felt like the cells of my body close in together when I feel unsafe with someone, and how they open, creating spaces between them, when my body feels safe. The friend suggested that I was a safety expert–that I had the potential to engender trust in myself and others.

Something else … would also lead to some profound change: the suggestion to build an Earth Shrine.

The reframing in this way, of what I had always seen as a fault in me, was quite something, and changed the energy of how I experienced myself. Something else he suggested would also lead to some profound change: the suggestion to build an Earth Shrine. To pile some earth, more than I could carry on my back, in a place of my choosing and each day, return to it and ask how I could make it more beautiful.

I found a tree on the farm where I live, which I often visited to sit and listen, and placed the earth pile at its base. The land there was strewn with fallen branches and leaves. A steep slope leads down to the tree and behind it, a small stream flows. It was the perfect spot. And I visited each day, and asked how I can make it more beautiful.

This simple act of building and tending to a shrine did so much more than make a tiny part of the world more sacred and more beautiful. It also changed me in subtle but powerful ways. Some of those ways I do not even have the words to describe, so I leave them as part of Great Mystery. But alchemy occurred. Much like the alchemy at the cauldron I visit each Thursday, where I meet my relations (my Anam Cara, my soul friends) and open my heart and cells so that their light can penetrate deeply into my being.

Do the same thing with Earth, with any of the elements, and the alchemy is powerful beyond measure. I began to find my ways of being in the world change; places where I had previously been fearful, I no longer felt fear. Places where I resented people, I no longer felt malevolence. Places I carried anxiety into, I now walked and talked with calm measure. Could this really be because of building a shrine?

I can’t say for sure, but the act of tending a place that “provides habitations for sacred presences within the everyday world,” feels like a large part of what we are here to do. After all, if everything and everybody in the world were seen as a sacred presence, we would have neither wars nor ecological devastation. And there is something about the tending each day to something outside of our bodies, that brings the beauty and sacredness we give, to within our own bodies–as within, so without.

This is the shrine today: 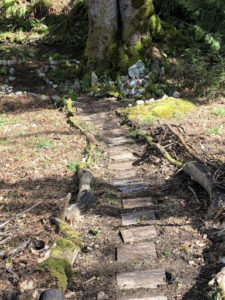 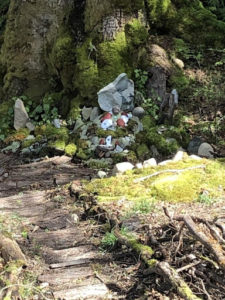 This is my way of not only honoring my pain for the world, but honoring the gratitude and love I have for Earth and all beings. As John O’Donohue writes: “Love does not remain within the heart, it flows out to build secret tabernacles in a landscape.” (O’Donohue, 1998, pg 34) 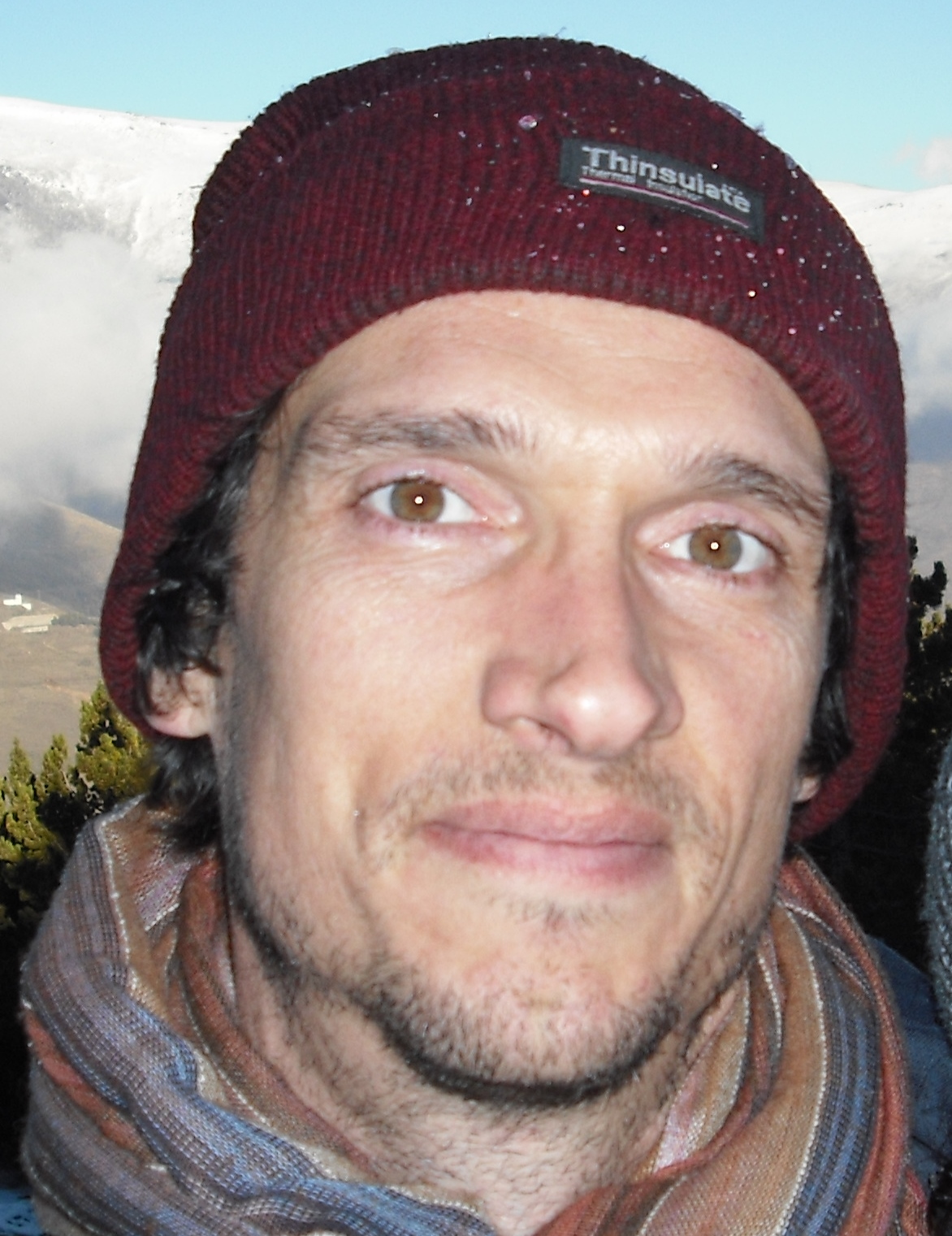 Phil Gardner: Born in England, Phil spent much of his life moving home, and his desire to find purpose and ‘home’ in life has been strong, along with the longing to put down roots. He has worked many different jobs from environmental tutor to window fitter, but found his greatest sense of purpose helping a friend run a children’s home on the Thai/Burmese border, and healing the trauma within himself (personal and collective). He now writes stories and poems to give language to some of the deeper somatic and emotional experiences of life, and practices as much presence as possible in each moment as he watches life’s pendulum swing wildly.